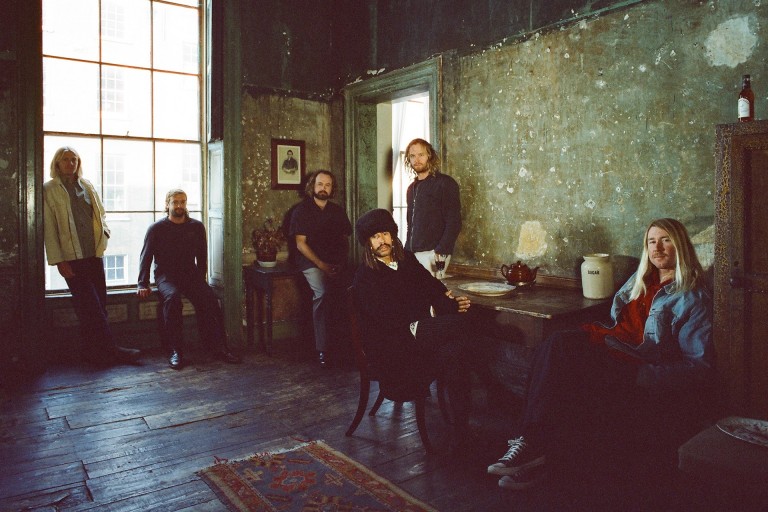 In The Green Room WIth Ocean Alley

Hidden away in a cozy speakeasy Nola’s that occasionally converts into a green room, Australian formation Ocean Alley avoids the rare London heatwave. A few hours before their one-off underplay show at King’s Cross’ Lafayette, the band’s Mitch, Tom, and Baden gather around a glossy green sofa while cracking open pre-show beer bottles.

The six-piece gets acclimated to the road life as they embark on a European tour. The ARIA nominated and Gold Certified grouping seems rested, eager, and grateful to be spreading the word about their upcoming fourth album, ‘Low Altitude Living,’ due to be released on October 14th.

“We’ve been here for four days. Just chilling, waiting for the show. We were in Finland before that,” says Mitch as we all sit down. “It’s a bit of a small venue down there tonight. It’s gonna be intimate. It’ll be a nice little showcase”, he adds. After their performance at the iconic Roundhouse earlier this year, the news of an intimate show at the Lafayette went wild and sold out in less than 24 hours.

‘Low Altitude Living’ emits brighter, lighter energy than the previous record ‘Lonely Diamond,’ as the boys confirm. Baden elaborates on following a pretty similar pattern to making a record that starts off more uplifting and slowly incorporates darker themes. “I think a lot of the time when we write records; we end up having a good batch of songs that are quite uplifting. And then we have these darker songs that we use a lot of distortions, and there’s a lot of rocky riffs. That is where we’ll start tapering the record off when we start writing those songs. We’ve almost had that same structure on every record; it starts real bright and happy and then just goes through this storm part”.

Mitch cuts in: “We’ve got such different tastes in music. We all like more or less the same stuff, but our upbringings with music, and overall tastes are slightly different, and that will always shine through. I think when we are doing the process of writing a record, there’s always gonna be little bits in there or songs that it’s just slightly different from the overall kind of feeling of each record. But I think that’s our style, our flavor. We like to not have it sounding too similar; try out different stuff”.

Ocean Alley’s usual trajectory of writing a new record on the road, the never-still Aussies, like the rest of the world, faced an involuntary break that served them an overwhelming amount of free time to sit with the new record. Tom says: “We had more time to be deliberate with the decisions of what we wanted in there because, in the past, we’d never have given us ourselves that amount of time to have all that creative power and play with it.”

‘Low Altitude Living’ focuses on a more grounded philosophy rather than a jet-setting hustle and frantic feeding of the machine. With that in mind, the band moved forward with what they stand for united; the boys expand: “It was our guitarist Angus’ idea. It’s always hard for us to come up with a title because I guess we don’t set out to write a record with a starting theme. We write how we feel at the time and then make the title up after”.

Baden explains in more detail: “I think it’s just a nice string of words that describes not so much the record, but more so our sound and where it comes from and low altitude being at the water. We spend a lot of our time and have grown up by the beach, and that’s a huge influence on our music. So I think it’s more so of a reference to us as a group of people and how our surroundings have affected our sounding overall. But especially this record, I suppose it’s the latest chapter of our story”.

In moments when all the control over life decisions and future plans is stripped away by a global pandemic, you might migrate to what’s dear to you, like Ocean Alley, translated for ‘Low Altitude Living’: “I think it’s almost a reference to us just as people and our lifestyle, and that’s where the music comes from,” they say.

As much as the band wanted to keep the ball rolling once things started to shut down in 2020, looking back, they all appreciate the much-needed and deserved rest and being able to breathe and reflect, at least for a moment: “It definitely helped in stopping us from burning out, but there’s also that amount of time that can be detrimental to your momentum. You spend too much time trying to get the momentum going, and then it’s out of your control. It was quite frustrating because it wasn’t anything that we did and same with everyone. It’s hard to get back in the rhythm of touring again. And it’s hard to leave your family home life that you’ve just had two years being there all the time”.

As the industry has seen it too many times, the guys of Ocean Alley make sure all conversations are being had to ensure their mental stability while reaching as many as possible and giving everyone their 100% without ever having to reach zero: “We definitely have always been pretty thoughtful of burning out on tour. We have these conversations a lot with our management about the time that we need on the road to play the best tour that we can play and still maintain healthy mental health. You do that from just refining everything as well, like going to the places you’re gonna make an impact or just trying something small that’s gonna be new; if you’re doing too much at once, it’s overwhelming. You got to pick your battles”.

The core value of Ocean Alley as a six-piece is the more than ten years-long friendship between Baden, Tom, Mitch, Angus, Nic, and Lach. This strong foundation enables the band to function better than most, Baden shares: “It’s one of those things that doesn’t work with every bunch of people, I guess, but we were very good friends, firstly, so I think that helps. We all care about each other. There are always issues that pop up, but we’re quite smart to see the bigger picture and just work through them”.

One of the new album’s stand-out tracks, ‘Touch Back Down’ plays with the idea of focusing on the little things when everything might seem dark and impossible; Baden elaborates: “It is touching on that subject; I guess it’s turning a bad day into a good day, I guess. And that’s where I started out, and I started writing the lyrics. It was more so about the smaller things that make me smile, like just being in the ocean for me or just taking note of the little things that can bring you back down from maybe feeling like you’re losing a bit of self-control and being upset for whatever reason. I think the music, in our sense, speaks more than the lyrics. A lot of the time, I feel like the atmosphere of the sounds that we make together speak for themselves, more so than like a direct message from the lyrics”.

Alongside their new album announcement, Ocean Alley released a new offering from ‘Low Altitude Living’ titled ‘Home’ that beautifully encapsulates the idea of ‘home is where the heart it,’ Tom prefaces: “That’s related for everyone out there. Everyone has a feeling of home, which is just a sense of belonging, and home isn’t necessarily a physical thing. They say home is where the heart is, and I think that’s quite true wherever you feel like you belong and the people, places, or feelings that you wanna be a part of. The sense nostalgic feeling of returning back to somewhere or someone that you connected to”.

Standing in the middle of the crowd of the sold-out Lafayette, eager to witness the Ocean Alley experience, a sense of belonging is all around the venue. The community amongst the audience, singing along with every word, Ocean Alley embodied a settled grouping in which each member is insanely equally talented. With the formation’s blend of psychedelic surf-rock and inward-looking lyricism, Ocean Alley represents much more than a band and more of a grounded family.