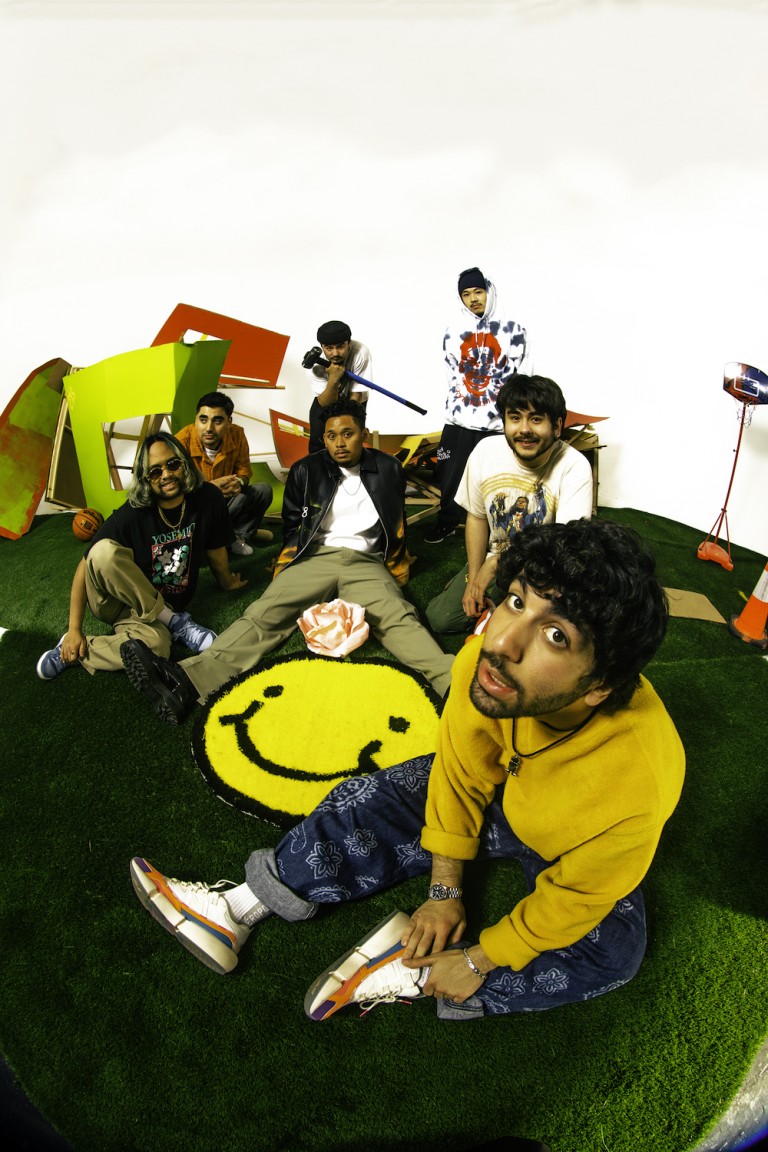 New kids on the block, Peach Tree Rascals fill the void left by Brockhampton. Based out in the straws of San Jose, California, this rising collective are the rascals you want to jump on.

Emerged out of a shed back in their hometown, their do-it-yourself approach to music has slowly won over the music scene as their fun-snazzy music production and deep-down brotherhood connection have grown into a single, harmonious unit. From their debut single ‘Glide’ to their most upcoming project, the band have worked relentlessly and will continue to become the best.

Whilst they rock the stages of Lollapalooza Stockholm and Mad Cool 2022, Peach Tree Rascals have only one thing on their mind, and thats their upcoming EP Does a Fish Know It’s Wet?. Already teasing listeners with the hit tracks ‘Let You Go’ and ‘Good Advice’, the group have stayed true to their colours and breeze through the sun-kissed melodies and glistening loved-up guitars that have already won their die-hard fans over and even more so new ones. With the tendecies of “always been a translation of whatever we are going through in our lives”, Peach Tree Rascals delve into the stories we have all lived through, hard or easy, and share it through the wonders of music.

Following their sold-out headline show at Omera, we caught up with the rising group to talk more about their EP Does a Fish Know it’s Wet?, DIY sounds, what it’s like performing again and what the future holds for one of the most exciting bands out there.

Let’s get straight into it. You’ve just released your latest single, ‘Let U Go’ – taken from your upcoming EP Does a Fish Know it’s Wet? What can we expect from this upcoming project, and what do you hope to achieve?

Tarrek: With our upcoming project, Does a Fish Know it’s Wet?, we’re showcasing our ability to create massive pop songs that will expand our discography without straying too far from the usual alternative sound we’ve brought to the table. We like to call this genre Rascal Pop 🙂

With themes of friendship, love, highs, and lows of life and creating your own path – why did you want to explore these subjects, and what was the reason for sharing your feelings with your fellow fans?

Tarrek: The subject matter of our music, since the start of our career, has always been a translation of whatever we are going through in our lives. We use our music and lyrics as personal therapy sessions to take whatever is weighing down on us and release it. We do this because it relieves us of the stresses that we go through in life and we know how powerful of an effect sharing our thoughts and feelings can have on the people listening. All of our favourite songs have helped us go through hard times in some way, and we feel responsible to try and do the same for our fans.

From ‘Song From Hell’ to ‘Moped’, what is the band’s favourite track and why?

Tarrek: As a collective, our favourite song so far has to be ‘TINYA’. It’s a song that simply feels the best to us. From the instrumentation to the lyrics and vocals, it stands out on this project as the song that aligns most with the sound we wish to explore and achieve. It’s one of those songs that hits us in a way that makes us believe in our abilities to make beautiful and timeless music.

Overall, how did Does a Fish Know it’s Wet? come together (especially the name), and how does each track entwine with the creative process and themes of the EP?

Jorge: I came up with the name because I had begun to realize what sort of situation, we were really in. The sounds on the project are leaning more into a “pop” sound, with our own twist of course (Rascal-Pop), but with our careers just beginning and with the success of ‘Mariposa’ that brought a lot of attention from the industry and a lot of outside noise, which in turn made me feel similar to how a fish must feel in a bowl, swimming in what they believe to be an endless ocean but confined to certain boundaries, influenced, watched and judged by people we don’t know, all the while wondering how this whole experience of existing in the industry (the ocean) will affect us now and in the long term. I don’t know how I’m going to change, I don’t know how this environment will affect me, and I don’t know who I will be years from now, so I’m left with the question of Does a Fish Know it’s Wet? Am I drowning in the industry or just paddling water? All I do know is that I’m trying my best to keep my head above the water.

With a slick, indie-pop sound to your music, how would you personally describe the bands’ growth within the music scene?

Tarrek: Everything we’ve done, from songwriting to producing and even the visuals, have all been self-taught and in-house. We only had ourselves and the internet to teach us about the craft we love. We used to dream about having the resources and connections to work with professionals to help bring the ideas in our heads to life. I think our growth has revolved around getting better with the limited knowledge and equipment we’ve had, plus finally being able to work with people who are experts in their craft. We feel like we still have a lot to learn and are not even close to the best version of ourselves. This is a freeing and motivating factor in our creative process. The best is yet to come!

As you’ve continued to expand as a band and find your niche within productions and soundscapes, would you ever jump into new sounds in the future?

Joseph: I think we’re still in the early stage of our career, so there’s definitely still a lot of surfaces we have yet to touch on as artists. It doesn’t really matter what genre. We’re all open-minded as long as the music we’re making speaks to us. Individually, we have all grown up with different tastes for music, so as a collective it’s an inevitable outcome for us to go into a new field sonically.

Looking at how you started in a shed converted to a studio, what do you remember from releasing your first ever track, and why did you want to become a band?

Dominic: When we were getting ready to release our first song, I remember that the timing felt so right. Something inside my head told me that it was our time to put our work out into the world so people could hear what we had to say. I had no doubt in my mind that it would work out. All those months we spent in the hot shed working and making mistakes amounted to something, and I knew we finally had it right. We organically became a band. We didn’t plan on it at all. We didn’t even have a band name until the week we released Glide. It was a combination of our shared love for music and wanting to be great that eventually led us to form Peach Tree Rascals.

Now following from your hit debut London show at Omera this week, a part of an overall European tour, what was that night like for you and how excited are you to come back?

Jasper: The London show was incredible! It was also much more meaningful to us than the other shows. This whole European tour, we have been performing at festivals where some of the audiences have never heard of us, and let me tell you, by the end of our set, they knew exactly who we were! But the London show was our very own headline show. All the people attending were already fans. It was a beautiful feeling seeing everyone jumping and singing all the lyrics to our songs at the top of their lungs back at us, some with tears in their eyes. That is what made that night so special. We are excited to come back, for all our beautiful rascals and hope to see you all again soon!

Though you have faced challenges, you have also reached high achievements with already hitting renowned festivals and amassing over million streams so far, but what has been your highest moment and why?

Issac: I think the best moments have all come in the form of live shows and in-person events. It’s always great celebrating the other achievements with each other and family – whether it be plaques or streaming/YouTube milestones, but the most amazing times are always shared with fans. Seeing everyone in person and fully understanding how our music has touched the lives of people across the world means something different. There is no better feeling than a sea of people singing our songs together, creating memories, and building communities with each other. It’s a feeling like no other. The easy choice for our highest moment would be the first festival we ever played which was Lollapalooza in Chicago 2021.

Finally, what does the future hold for Peach Tree Rascals?

Issac: The best is yet to come! The biggest focus is always the music. I’m a very firm believer that we haven’t even scratched the surface of our potential as artists, and I know everyone shares the same sentiment. We’ve been making amazing music recently, and we can’t wait for the fans to hear what we have to offer after Does a Fish Know it’s Wet? is finally released. Aside from the music we got VIDEOS, MERCH, and TOURS that will only get better as time goes on!