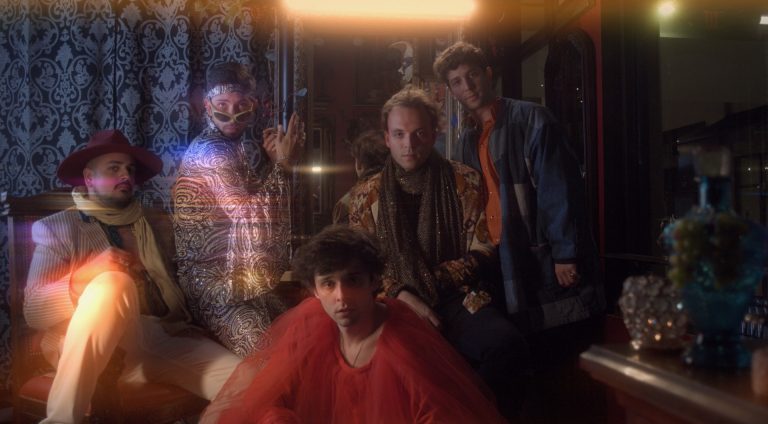 Glitz and glam that comes with the addictive blend of earworm hooks and nostalgic soundscapes that makes you want more – The Hails have gone from a band in obscurity to the tips of something special.

After meeting in college at the University of Florida, the rising five-piece outfit grew up in the oaths of Gainesville before moving to Miami to pursue their dreams as musicians. With their weird and wonderful take on music through numerous long nights and freeing house shows, The Hails reached their next step in music with their debut EP and slowly but surely picked up the following of devoted fans.

Fast forward past the chaos of 2020, their double release of 2021, ‘Fake a Frown/Till I See You Again‘, take on the world, and the emerging band are now gearing up for the release of their second EP that will be possessed by a new lead of inspirations and soundscapes.

As they sit across the other side of the world and take on the joys of their recent music video, we chat to lead singer Robbie Kingsley about how The Hails kicked off, keeping quiet of the upcoming EP, dream venues and what the future holds.

Formerly based in Miami, how did The Hails kick-off, and how did you all get into music?

We are currently based in Miami, but we started out in Gainesville when we met at the University of Florida. The band has roots as far back as some of our middle school days. Zach, Franco, and Andre played in a band together in south Florida, and Dylan knew Zach and Andre from a young age, but I met everyone in college. We started playing house shows quickly, doing a lot of traditional indie/alternative covers — “Creep” by Radiohead, “Say It Ain’t So” by Weezer — you know, just a lot of staples that crowds want to hear. Slowly, that turned into us writing some originals and playing at the main local venue, High Dive. We just got tighter as a group and realized we all shared the same high ambitions.

Whilst you all met in college at the University of Florida, has it always been a joy ride, and how do you split between being friends to being musicians?

The joy ride takes place in bursts. It’s kind of like how I run. There’s a lot of walking before even thinking about a sprint. Being friends comes naturally, there’s a lot of joking and messing around. We like to keep things light, and arguments do happen, but they’re easily resolved.

In other news, you’ve just released your double single ‘Fake A Frown’ and ‘Till I See You Again’. How would you describe these tracks and, what do you hope listeners gain from them?

“Fake a Frown” is one of the best showcases of Dylan’s writing, in my eyes. Most of the entire song, words, and melodies, is from his original demo. Franco and I just tacked on some stuff in the second verse and wrote a few lyrics to round it out. With it being so heavily inspired by 70’s music, we wanted to pair it with “Till I See You Again,” a song that was written in the 1970s by Dylan’s uncle. Hopefully, people like the songs for what they are: a little throwback song writing with some modern touches.

How did you write and produce these tracks?

Dylan, Franco, and our usual producer, Matt, all took charge of finalizing, “Fake a Frown.” Matt’s been living in Los Angeles for a while now, so we set up production sessions with him over Zoom, which was very challenging but necessary. Computers would crash, and there’s so much lag, but we got through it. Matt produced “Till I See You Again” in full before I tracked any vocals, so that process was super easy.

With each track showing different elements to your music and delving into separate routes – what is the inspiration behind your music, and how would you describe your overall sound?

The usual goal is to write a good, catchy song. However, there are different routes we take after a song is composed. Do we want a little edge? Are we playing this by the book? Do we want to push a production boundary? We don’t ask these questions aloud to each other, but the answers come up in the demo process. The sound is usually dependent on the song itself. I think we’re still trying to find a true description of what “our sound” is, but it’s an interesting path to walk.

Both taken from your upcoming second EP, what can fans expect from this second project, and how does it differ from your debut EP?

I’ll remain quiet on this for now. Plans are ever-changing but in a good way.

As you delve into a different route to your previous work, do you believe as a band you’ve grown over these past years?

I suppose, yeah. Growth never feels like growth, does it? I’m still excited about everything as if we started our band yesterday.

On the other hand, you also just released an amazing glam-1970 music video for ‘Fake A Frown’ – what’s the inspiration of the video and what is it like producing visuals within COVID?

There was a period in 2020 when I was somewhat obsessed with learning about Marc Bolan of T. rex. I couldn’t stop listening to “Electric Warrior” and “The Slider.” That’s definitely where the glam idea started. We took the proper precautions, and the shoot turned out to be a lot of fun. Finding the locations was tough, but everything came through. I must give props to our director, Oriane Playner. Oriane is a true pro and made every little detail count.

Further, you have also been announced for Wonderstruck in Cleveland this summer – how excited are you to perform alongside Portugal. The Man & Walk The Moon, and what can we expect from your live shows?

Very excited. Those are some great acts to have your name next to on a festival poster. We’ve gotten to the point where I’m stoked about shows being back, but I also have this creeping feeling I forgot how to perform. Feels like I’m a kid again trying to figure out how to jump in the deep end of the neighbourhood pool.

Also, what is the dream venue and why?

The Ritz in Ybor City. I’ve dreamed about playing there since my lifeguard days at Adventure Island. You can see the distant glow of downtown Tampa from the tops of the tallest water slides, and I used to stand there thinking about what it would be like to be on stage at The Ritz rather than picking up used pool noodles. Once we play there, that will be a great moment for me.

Finally, what are you working on at the moment, and where do you see yourself in five years?

We’re still plugging away, working on a bunch of new songs and new creative directions. Five years? Hopefully still making songs with these guys and living life in South Florida. I don’t need much else than some music and my pals, and the beach doesn’t hurt either.

Stream Fake a Frown/Till I See You Again on Spotify