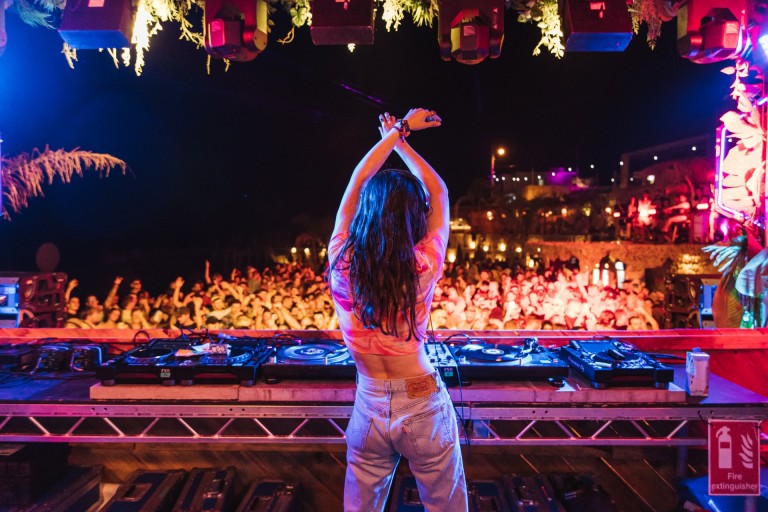 “We’ve been planning ION Festival since 2018” Jeff Gray, Head of Events at LWE explains. He’s played a big role in getting dance and electronic music fans across the world to Albania’s beaches. Joined by London’s most infamous event organiser Junction 2, the festival finally came to fruition after a long four-year wait.

Back in 2019 when it was first announced, attendees geared up for seven days of sun, sounds and dancing before the devastating blow of Covid-19 hit the scene, closing every corner of the globe, and leaving the concept of ION Festival in the dust.

Fast forward to September 2022 and floods of locals, and techno lovers travelled to the beachside town of Dhërmi, ready to immerse themselves in the inauguration of ION and watch what was once a pipe dream for LWE and Junction 2, become a reality. “People came from all over the world. We spoke to Albanian locals, people who’d crossed the country, some had trekked from Kosovo, a couple who’d come from Brazil, even backpackers who’d stopped by having seen the festival was taking place.” DJ duo Frankel & Harper tell us as we catch up on their set at ION.

So, offering us one last taste of open-air music before we return to London to live out the final days of the organiser’s Printworks venue, or find heat on dark winter nights dancing in Tobacco Docks, we saw out summer skanking to the synths and drops of our ride-or-die, electronic DJs, watching the run set and rise again over the sea.

Arriving in Corfu, anticipation is high, ‘ION Festival’ buzzes through the airport line, seemingly on the lips of everyone within ear shot as we gear up to embark on a journey across the Ionian Sea to our end destination of Dhërmi. Boarding the boat alongside fellow dance music fans, it dawns on us that for many, this puts in motion a moment they’ve been waiting years for. As we power across the water towards Albania, speakers stir and the sesh begins, everyone energised and eager to arrive, unknowingly at the time, about to usher in a new era of partying.

Why? Set across six carefully selected locations, with sounds and talent aligned to each stage, it quickly becomes clear on our first evening that ION is no ordinary festival, instead, it’s a curation of dance music culture. Every detail devised to deliver an escape, each setting is designed for an emotional, ecstasy fuelled experience, echoing nothing less than euphoria.

Opening the Wednesday stages, Andy Luff and Gemza warmed up still-arriving attendees, some joining the sesh straight off the boat with backpacks in tow. “We’ve been waiting weeks for this” Will tells me as we dance at The Cove, he’s here with a group of friends from Belgium. “As soon as we heard the music at the entrance, we were like yeah, f**k it, we’re going straight out, the hotel can wait.” He laughs, signalling to the bag still strapped to his bouncing shoulders.

Rave crews weren’t the only ones to catch wind of what LWE and Junction 2 had brewing over in Albania. Big artists including Jeff Mills flew across continents to support the festival’s introduction to the scene with their sounds, alongside a string of underground artists. “The LWE team always put together a line-up that speaks for itself and stands out in a time where a lot of festivals seem to feature same artists over and over” Frankel & Harper tell us as we dig into their thoughts on ION’s diverse array of DJs, them included. “They brought together artists from across the sound spectrum and all over the world.”

“We actually incorporated a lot of local artists in the line-up, that was really important for us.” Jeff Grey explains, expanding on LWE’s inclusion of Albanian dance music in the set list. But did it create the atmosphere ION’s organisers were hoping for? “Absolutely” Junction 2 tell us. “One of the learnings here is that the darker, harder side of ION is probably best suited to some more intimate spaces, ones that can create that pressure cooker environment and, of course, The Bunker” they continue, hinting that we may be set to experience some more hardcore rave spaces in 2023. On that note, if you’re hoping to head to the next edition of ION, here’s what you can expect from each stage (or the ones we know about at least) …

The Mainstage, this year closed two nights in a row by Chaos in the CBD, like others is based by the beach. Waves crash behind the crowd as music flows and arms wave in the air. It’s here, on this secluded corner of coastline, surrounded by fellow techno fans, that you’ll realise just how far you are from reality. “It was lovely to see the rave culture coming back, to perform, and experience the whole festival.” ODA Haliti tells us, reminiscing on her opening Saturday-night set at the stage. “They did a great job for their first edition, and I think ION has automatically positioned itself differently from other festivals.”

Take a walk across the site to a more intimate setting and you’d find yourself at The Cove. “I bought 2 record bags” B. Love laughs, being one of the DJs to launch us into a trance at the location. “I had to really think about how I’d approach every set, rather than just turning up and playing.” Bringing liquid techno and house beats to life, talent sent vibrations into the crowd, designed to captivate as our feet sank into sun-soaked sands by day and danced under stars by night.

Boat over to The Canyon and you’ll be transported to an enclosed beach. Beats echo up the towering cliffs, casting shade over the grainy sands where sun, sound and pulses fling festival goers into their own slice of electronic paradise. “I’d say the sheer beauty of the locations where the stages were built set ION apart from other festivals I’ve been to.” Explains DJ Otik, he warmed up for Daniel Avery and is just one of the upcoming artists we discovered behind IONs decks. “Places like Outlook have tried similar things but there seemed to be a much more exclusive and secluded energy to many of the spots, especially at The Canyon where I played”.

For those seeking out some techno disco, the Yacht Club’s decked setting, hovering over crystal-clear water and overlooking the scatter of lights illuminating Dhërmi town in the distance is where you’ll find it. “It was a really beautiful, hedonistic experience” says Madam X, the DJ responsible for carrying partygoers into the early hours of Saturday morning with her genre-bending beats. “I went across the board with the music and just had fun with it. I started early on a funky, percussive tip, setting the tone for the night, and started to fill the room out as I went darker and heavier with the UKG, bass, and techno flavours. I love how free and creative I could be with the sound.”

Moving over to The Deck, deeper rhythms dragged us into a thick atmosphere of excited dancers, eager to watch artists such as Radioactive Man and Helena Hauff take to the turntable throughout the week. Catching up with DJ Voigtmann following his set, he said “I normally vibe off the crowd, the fact that the gigs are by the sea makes a massive difference. Even for us as artists, it’s nice to watch other talent play by the beach whilst we’re sitting in the water. Next time I’ll bring a little crew from London, they don’t know what they’re missing.”

Completing the selection on Friday, for one night only, ION opened the enclosed setting of the forementioned Bunker stage, an underground rave cave residing beneath the surface. The redesigned carpark space, packed with 40 industrial fans to make the space possible, hosted some of the festivals biggest names including Héctor Oaks and Nina Kraviz.

As Monday arrived, we took a trip across Dhërmi to a rooftop stage further afield, travelling through Albania’s winding roads with other attendees, we reached The Fort. To your right you’ll find mountains, to your left, the sea. Making the climb to an old, castle-esque location, the sun set to the melodic beats of Marcel Dettmann before being blasted into liquid jungle by Dax J as darkness fell.

For once, we are not left wondering what the future of raving will look like, and why? Because ION festival is the future. Through its inauguration, LWE and Junction 2 have already captured the attention of crowds across continents, amassed a cult following and carved yet another space for themselves the scene. With ION’s name now buzzing across major cities, the only thing we will predict, is that next year will be bigger and better. “The first edition has been better than we ever expected to be honest” Junction 2 tell us in the weeks following the festival. “Finally seeing our vision coming to life with the support of the Mainstage team was really exciting, seeing the beautiful audience turn up not knowing what to expect, but excited by what we had promised, was great to see.”

“ION festival? It’s an escape.” Attendee Daria tells us, when asked to give a word on ION festival’s final night. “It’s a place where the electronic music fans can come together and forget life for a while. It almost hurts a little knowing we have to head home tomorrow, like you know you’ve been part of something special and don’t want to see it end. There’s always next year though…”

Tickets to ION festival 2023 will go live at at the start of November.