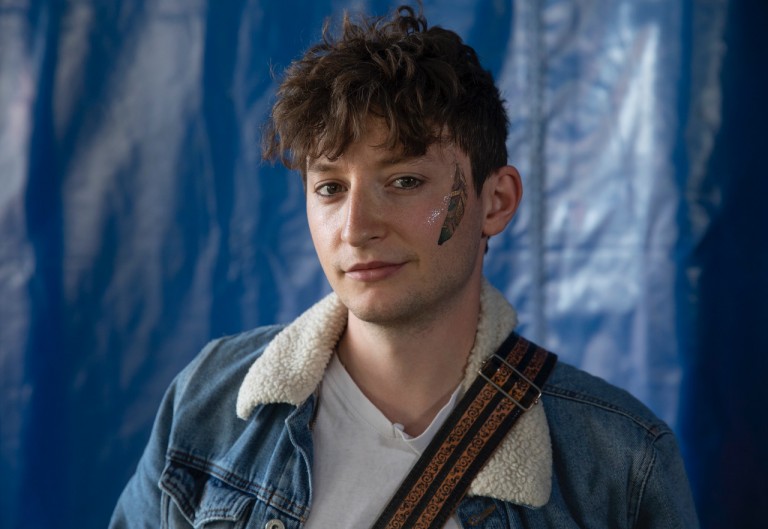 Rocking a spacesuit matched with glitter make-up, Brighton-based singer/songwriter Jack Valero begins his career with wide-sound single ‘Heaven Help Me’ and ‘Hollow Warmth,‘ part of a video trilogy with the last piece to the puzzle coming in September.

Influenced by Tom Petty, DMA’s, and more latterly, Sam Fender, Jack Valero is gearing to change the face of British pop with conversational poetic lyricism and tunnel-vision passion for his craft. After realising he did not want to study music inside a Brighton university classroom, Valero would rather be out in the thick of the music scene.

Valero’s drive is pure and headstrong. Rather than getting lost in the thrill of it all, Jack Valero focuses on the moment. Debut release ‘Heaven Help Me’ balances the agony of collective and personal despair fuelled by the global pandemic and a break-up.

How are you enjoying these British summer days?

Struggling in this heat at the moment but trying to make the best of it haha. It’s particularly bad if I’m wearing the spacesuit on stage as it’s basically made of baco-foil let’s be honest.

How was your hometown show in Brighton?

It was great thanks, I had such an awesome time sharing the stage with my good friend Kelley Swindall who’s a country folk singer from Georgia USA and Evan Williams who was a pleasure to get to know.

How would you describe your live performances?

Well I like to dress up like a spaceman and wear glittery makeup so certainly not the most orthodox for a singer songwriter. But I think people really enjoy that, it always gets the same reaction every time of ‘Whoa, what’s this guy gonna do?’. Tends to grab people’s attention more. I like to think of my shows as less me just playing my songs and more of an all round performance, making it so whether people are into my music or not they’ll still come away remembering it or enjoying the performance. It’s the best way to convey the emotion of a song if you’re really feeling it I think.

What/who inspired you the most to pursue music professionally?

Many things, there’s no one particular thing tbh. Growing up around music & musicians I think of course played a part, but what tipped the balance over into an obsession was playing an Xbox game called Guitar Hero 3: Legends Of Rock. As a 14 year old you’re normally pretty obsessed with video games and this one put music through an avenue that was familiar to my generation and made it relevant. It also got me used to roughly how your hands would work on a guitar. I became obsessed with the songs there and asked my parents about them who then showed me more about the bands who played them, opening me up to a whole world of music history. I met other kids who also loved the game at school and we’d all hang out and chat about music, but they could also play guitar. That’s when it became an identity thing, it gave you your place in the world. Being part of this gang and I wanted in. So I started to play guitar.

As a rising artist, what do you aspire to be in five years time?

I find it very hard to answer this questions because I never look that far into the future, it’s impossible to really plan that far ahead and even worse to fantasise too much as you can miss the more important opportunities you encounter along the way. Doesn’t sound very rock & roll, but if I can be in a place by then where music is my only job and it pays the bills and I can live comfortably playing shows then I’ll be in bliss.

What is the backstory of your previous single ‘Heaven Help Me’?

A mixture of many things, it came from a time where I’d just been through the pandemic and then straight into a very bad breakup. I think in the song it’s basically switching between the collective despair felt by everyone that was palpable at the time and my own personal despair. The feeling that everything was coming crashing down, all things that seemed unmovable and forever. Whether personal or universal.

What is your second single ‘Hollow Warmth’ about?

I think this one is a more obvious breakup song, but there’s a level of indifference in it. Where you’re fully embracing the inevitable, but it doesn’t make you feel any better. Just numb almost.

Why did you want to release a video trilogy?

I didn’t set out to, it just turned out that way. After we made the second one I felt I could see a line between the two and could see the third video manifest itself.

What can you share about your forthcoming debut EP?

The third track along with the final instalment of this epic trilogy haha, will be out sometime in September. Soon after that I have plans to go back to the studio get stuck into the next lot of tracks.