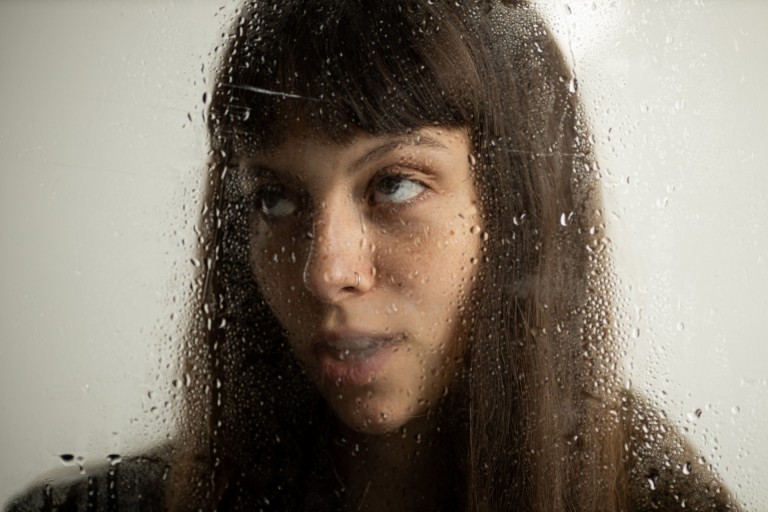 Translated from scribbles in her journal, Keeper E. hits the indie pop scene with her sophomore album, ‘Thank U and Please and Don’t Go’. Released May 6th, the EP consists of 7 confessional and, let’s face it, relatable songs, including her teaser track, ‘I Can Do It’.

With the resolute mindset of a young, female artist, Keeper E. uses the single as an affirmation not just for herself, but her listeners also exposed to the prejudices of the patriarchy. The rest of her album continues with confident themes of introspection, layered with catchy synth-pop sounds and weighted vocals.

We caught up with Keeper E. to face facts and discuss the concepts surrounding her new single, and upcoming live show, as well as delving into the rest of the EP…

Tell us about yourself Keeper E. – what’s your history with music?

I’ve been playing music from a very young age. I’ve always been in lessons for piano and violin and later learned drums, guitar and started singing. I spent time with some sort of choir, orchestra or music lesson after school every day, and then got a Bachelor of Music, focused on classical piano – so music has always been a big part of my life.

I remember when I had my first crush when I was a kid.. I didn’t know how to handle my emotions, so I looked up how to write a haiku and then wrote a funny-kid-love haiku. I’ve also always loved to journal and a lot of that has turned into songwriting. It’s like a way for me to stay focused on the feeling I’m trying to feel and express by having an end goal of writing a song.

How do you get the ball rolling when journaling, songwriting or generally producing music?

Before the pandemic, I got most of my songwriting inspiration just from my life and my friends’ lives, as well as emotions I felt. But now more and more, I get inspiration from movies and stories and imagination. As for production, I always get inspired by any song that has a sound in it that I’ve never heard in a song. Anything that sounds new is always very exciting to me.

When everything’s pieced together, how would you best describe your sound?

My sound is layered with synths and basses. The newer songs are a lot heavier on the drums. There are lots of catchy melodies and lots of different voice parts happening at the same time in some songs. They’re great songs to sing along to and there’s also lots of interesting layers when you listen closely.

Your previous album, ‘The Sparrows All Find Food’, sounds like a beautifully orchestrated stream of consciousness. How was it received?

Thank you! I feel really proud of this album. It was really a huge challenge for me to learn how to produce music and then another very scary thing to share it with strangers and everyone I know. I feel really lucky and happy that people relate to the songs and that they want to keep listening to them.

The collection of songs share a lot of imagery around nature – is there a reason for this?

I live in a really beautiful part of the world and being in nature has been a big part of my life ever since I was a kid. My surroundings play a big part in how I am feeling and I always feel so much better when I am surrounded by nature. I care so much about the earth and when I think about how we, as a society, are treating it, it makes me so worried and sad for the future. I hope by including some natural imagery, others are encouraged to love the earth the way I do.

Your recent single, ‘I Can Do It’, is described to be full of ‘empowerment and equality’. What does the song mean to you?

That is exactly what this song is supposed to feel like. This song plays in my head all the time when I’m feeling inadequate or when I see the patriarchy in action.

With such weighted lyrics, how did you initially make sense of the track?

As I have gotten older, I have felt more and more of the weight of the patriarchy. Especially starting out as a producer, in such a male dominated field, it’s been hard sometimes to feel confident.

This song came about after changing a tire on the side of a busy street with a friend and having several men approach us and tell us what to do – and several women saying “they’ve never seen two women doing that in their lives.” This experience reminded me of all the other times in my life men have explained things to me that I’ve already known, or over-explained things, or directed an explanation to the nearest man in the room instead of to me. The chorus of this song is a response to being treated like that and an affirmation and confidence boost to the listener.

The verses of the song are meant to expose my downfalls and shortcomings, which in turn emphasises the chorus even more. Even if I make mistakes and do things wrong, I still am a capable person and I don’t need things mansplained!

So, was the song born more from personal experience or a wider construct?

It’s definitely a mix of the two! It started with the personal experience as mentioned, but it’s a song for everyone who is affected by the patriarchy. Whether done intentionally or not, mansplaining helps men keep their power and allows them to feel like they know something that others don’t.

You’ll be performing this and your new album, ‘Thank U and Please and Don’t Go’, in venues across Canada soon – what can we expect from your set?

We’ve got a three piece band: drums, singer, and me also singing! We’ve got some choreography and beautiful harmonies, and you can expect a fun yet profound performance.

Thanks for chatting with us. Before you go, what does the future look like for Keeper E.?

I’ve got lots of exciting things coming up in the future. I’ll be making more music videos, playing lots of shows and releasing lots more music!!