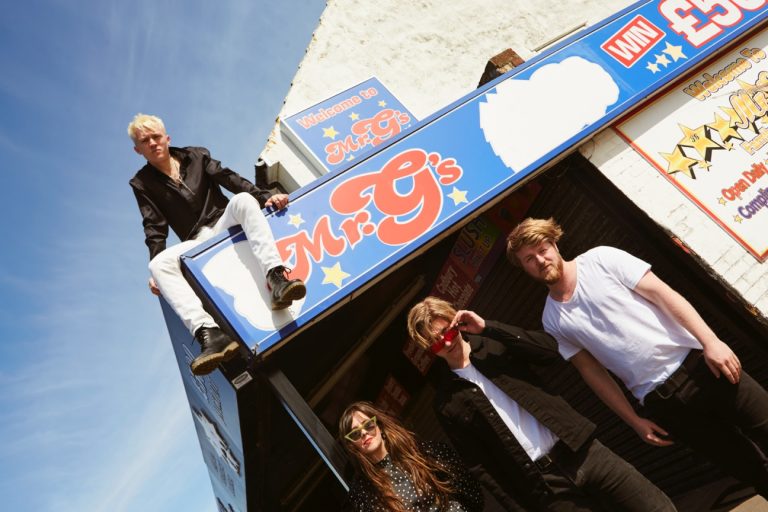 Modernising the old formula for a love story, London’s four-piece KHARTOUM reveal visuals for their new single ‘Benny’ taken from their forthcoming EP ‘Vultures’ out on August 20th.

The indie-rock formation comprising of Scarlett the drummer, Jake the Bass player, Cam the guitar player, and Oscar the singer first got together in 2017. Performing under their stage name KHARTOUM coined after the fabled racehorse from Francis Ford Coppola’s masterpiece The Godfather.

Not a frequent occasion for an up-and-coming band, KHARTOUM’s first live performance was for Each X Other’s catwalk show at Musée du Louvre in Paris. In terms of venues, it does not get more iconic than the world epicenter of art.

In preparation for the release of their debut EP ‘Vultures,’ KHARTOUM share their third teaser with a breezy new single, ‘Benny’. As a follow-up for ‘Vultures’ and ‘Took It All Away’, ‘Benny’ depicts “a tale of two people, entangled in a love story. Benny is a dreamer. Alice is the answer”.

As a director of the intriguing visuals for ‘Benny,’ KHARTOUM’s Oscar shares the concept for the music video: “I wanted to modernise the old formula for a film based around a couple by working with actors from the under-represented LGBTQ+ and Black community”.

If this is not enough to reel you in, read our full interview with KHARTOUM down below, where they share their Glastonbury experience and how the band got first together. You can also catch them at their monthly residency at London’s Laylow.

Where did we catch you?

Cams in Devon, Oscar, Scarlett and Jake are in London

What haven you been up to since things opened up?

We’ve been spending as much quality time together as we can. Long walks on the beach, a road trip to Scotland staying in a shack that was built by Oscar’s Grandad…. and pubs.

Could you tell us the story of how you guys met and how did you make the decision to form a band?

Oscar and Cam met at school, then Cam met Jake at uni and then we found Scarlett a couple of years later at a rave in a field. The band began with Cam and Oscar on acoustic guitars but soon we realised the songs deserved more complex arrangements so decided to bring in Scarlett and Jake.

Could you also introduce each member and their roles?

Scarlett is the drummer, Jake is the Bass player, Cam is the guitar player and Oscar is the singer

What is the meaning behind your stage name?

We took Khartoum from the film the Godfather, it’s the name of the racehorse that meets an untimely end and end’s up in bed. The English translation of Khartoum is “The Confluence” and we are ourselves are a confluence of personalities and influences in our music.

How do you come up with concepts for songs?

The songs all come about in different ways, they often undergo multiple changes and restructures before we arrive at the final arrangement. Often the initial idea comes from a member of the band and then we work-shop them in the rehearsal room before taking them to the studio. With 4 of us in the band, someone’s always got something to write about!

Your first ever live show was for Each X Other’s catwalk show at Musée du Louvre in Paris, what was that like, performing at such an iconic place?

Performing at Musèe de Louvre was surreal yet affirming, it’s unavoidably inspiring being around some of the finest art in the world. Colliding our music and live show with the world of fashion was really fun and something we’d love to do more of.

What did it feel like performing at Glastonbury 2019? What was your favourite moment from that performance, and the festival in general?

Playing at Glastonbury felt like being a small part of a magnificent living breathing organism made up of hundreds of thousands of tiny cells that all have the same brilliant idea. Our favourite moment from the performance was the genuinely deafening encore, it was amazing to have that kind of reception from an audience who have given up part of their weekend to come and see you do your thing.

What is your new single ‘Benny’ about?

Benny is a tale of two people. Entangled in a love story. Benny is dreamer. Alice is the answer.

The video is strikingly beautiful and ethereal. It’s never clear where you are exactly, the common thread is romance and the infatuation Benny and Alice have for each other. It’s inspired by films like Eternal Sunshine of The Spotless Mind and Run Lola Run.

What could we expect from your upcoming EP ‘Vultures’?

We see the EP as a tasting session for what’s to come… it’s our first body of work but we wanted it to give us the freedom to develop musically and push Khartoum’s sound onto the next level. It’s an EP which shows off our influences and shows how we tick, but not something which defines us necessarily.

What was important to you when creating a bigger body of work?

Freedom of expression is always paramount to us.

After the live show hiatus, are you guys excited for your monthly residency at Laylow?

Definiely – we just performed at a sold out show at The Old Blue Last and it was brilliant to play out some of our songs live to an audience for the very first time. Laylow is like home to us and the shows are always nuts… we’re playing Lattitude Festival soon too, so it kind of feels like Christmas right now after all this time away.

Lockdown was tough but also we learned a lot as a band. Three out of four songs were recorded during lockdown by us, and so whilst we lost control of our daily lives to the pandemic, we gained a lot of control in the process and learned skills which we might have handed away to another producer… it was ultimately rewarding strangely.

Are you working on anything else?