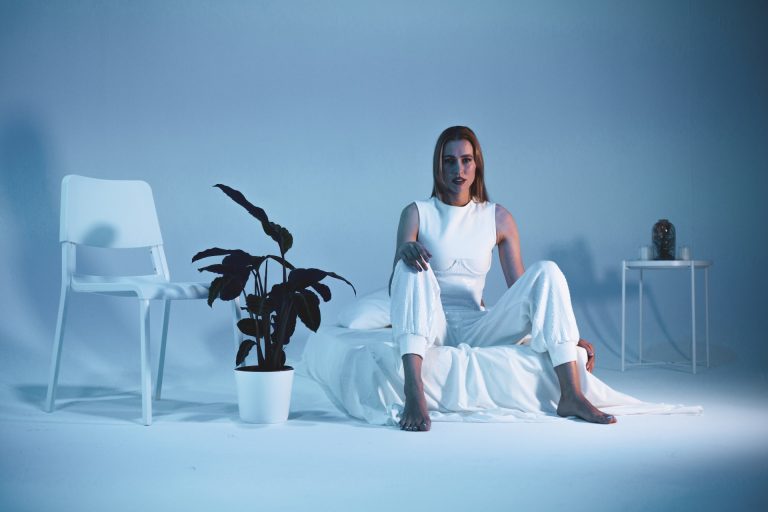 With a wealth of influence throughout her childhood in Lithuania, creative enterprises and eventual move over to the United States, New York City based singer/songwriter Klaya is a refreshing remedy for modern day realism. Accumulating inspiration in an abundance; stemming from her experience in both life and her studies, to working with two-time Emmy Award winning producer and composer Arthur Pingrey, her alternative pop sound flourishes with thoughtful sentiment and wistful poise.

Written in the serenity of the four walls of her New York City apartment, the brand new single “Water Horizon” delicately narrates the disparities between love that’s romanticized in fairy tales, to the imperfect perfections of realistic love. The seductive vocals layered over sensual strings, creates an impassioned and cinematic feel, enhanced furthermore by the moody blues of the accompanying music video. I was able to catch up with Klaya to hear more about her life and the lessons that led her to writing this stunning new single.

Hi Klaya! Congratulations on the release of “Water Horizon”! How does it feel to finally have it out in the world?

Hi! Thank you so much! It feels incredible. This has been my dream since I was a kid but I never imagined it would happen. It still feels surreal like it’s not really out there. I am definitely processing it 🙂

I heard “Water Horizon” was written on your bedroom floor during lockdown. Some people found this period to drain all of their creativity, but in your case it seems to have done the exact opposite. Was “Water Horizon” an exception, or did you cook up other treats with your creative juices?!

For me the creativity flows when I am in ‘the box’ or between four walls as I call it. I believe that the most creative space is inside oneself and you don’t have to look for it elsewhere. I love discovering my inner world through creativity, you notice a lot of feelings and emotions that lie there deeply buried in the subconscious.

Since experiencing that creativity during lockdown I noticed that I have to be in one location and in one space to be the most creative. Nothing else distracts me from being truly me. So yes, loads of treats cooked, I could put out two albums already haha but I am tapping my feet into the music industry, evolving every single that I put out and tuning into creativity not just musically but also visually and esthetically.

Tell me more about your upbringing in Lithuania? Do you think it inspires your sound at all and if so, are there any particular artists from the Baltics that you admire?

I grew up in a relatively young country, after we got our independence in 1990, so my parents’ generation had a lot to figure out. It was chaotic and uncertain and with all of that I was brought into this world. I am one of the first generations who grew up in a free country. It feels very sacred. It is hard to describe the upbringing but let’s say it was somewhere in between the pains of the past and the hopes of the future. That’s the state that the people were living in, so a lot of music was created within that mood spectrum.

With my dad, we would always listen to one of his favorites – Andrius Mamontovas, whose songs always remind me of the freedom that we have. Most of the inspiration came from these musicians of my parents’ generation who showed that you are free to express yourself and use your voice. They showed the rawness and openness in the music in the way that couldn’t be done before, and I carry this with myself when I’m writing songs today.

“Water Horizon” was written along with Oscar Award nominated and two-time Emmy Award winning producer and composer Arthur Pingrey. What was your experience like working with him?

We actually never met in real life while working on Water Horizon and the whole song was done sending files forth and back and with a bunch of phone calls. But even through the distance Arthur really understood the core of the song and brought it out in its best light. However, it took us around 5 months to wrap it up. I was also traveling between Mexico, Brazil and Europe and tried recording vocals on the sofas in various AirBnBs.

I met Arthur after working with him online for more than half a year, and now we wrap up a song in a few days which is really exciting. I am also a great believer that people come into your life for a reason, so working with him was easy and fun from the very beginning. He made this song powerful while I wrote it as a sad ballad on a guitar.

The single narrates our “Disneyfication” of love. Love is depicted in an entirely different way in fairytales than it is in reality. Both the single and video play with this concept, showing the harsh contrasts between them. Was there a specific moment that sparked this theme for you?

My first real heartbreak really shattered my understanding of romantic relationships. I wasn’t really waiting for a prince on a white horse but at the same time the way I imagined romantic relationships was very distorted from reality and very much influenced by the ‘Disneyfication’ of them.

I thought that when you feel butterflies in your stomach everything else should come with that feeling too, everything should be perfect. But it isn’t the case, right? Relationships are complicated, messy, wild and completely unpredictable. But when you grow up you understand that that’s the beauty of love – the whole imperfection of it.

Your love for music started from a young age, with you picking up the piano at just 5 years old. You also danced ballet at local operas in your hometown. With creativity and arts running through your veins, have you ever considered acting as well, or any other form of art?

Fun fact – I’ve actually done acting in local theaters and filmed in TV series back in Lithuania when I was 14 and I hope no one will ever dig it out haha. I also attended art school but due to the lack of time I dropped out. Another fun fact – after dancing ballet for 8 years I decided to switch completely and start Latin dances (salsa, bachata). I’ve also danced on ice for a few years which ended up with a scar on my chin haha.

But the difference for me is that I can live without acting or drawing or ice-skating but I can’t live without music. I just have to move and sing, otherwise I don’t feel like I’m truly living.

Aside from arts, you studied Economics in Italy and Cognitive Science in New York City. A major contrast from your music, but do you find yourself making any connections between them at all?

I definitely do see the connections between them all. Having studied Economics really helps me in understanding the music industry and navigate it from the business point of view. And cognitive science I just can’t even begin how many connections there are. For example, now I am taking a class called ‘Psychology of Music’. I am learning why we like certain music, why sad songs have the power to comfort us, what happens in the brain when we listen to music, why can we sing an old song from our youth when we have Alzheimer’s but not recognize that it is a sibling sitting next to you. It’s incredible to study this miracle called music from the science point of view too.

I am honestly so excited for 2022. First, my birthday is 02/22 (my lucky number 2 is everywhere) so it’s a very good sign. I am also graduating this year! And onto even more exciting things – I have many songs to share with you and Water Horizon was just warming up the ears. I honestly cannot wait to show them. A few of them are already fully recorded and ready to see the world. With these new songs Klaya’s world will open up for many more people to explore. It’s thrilling.