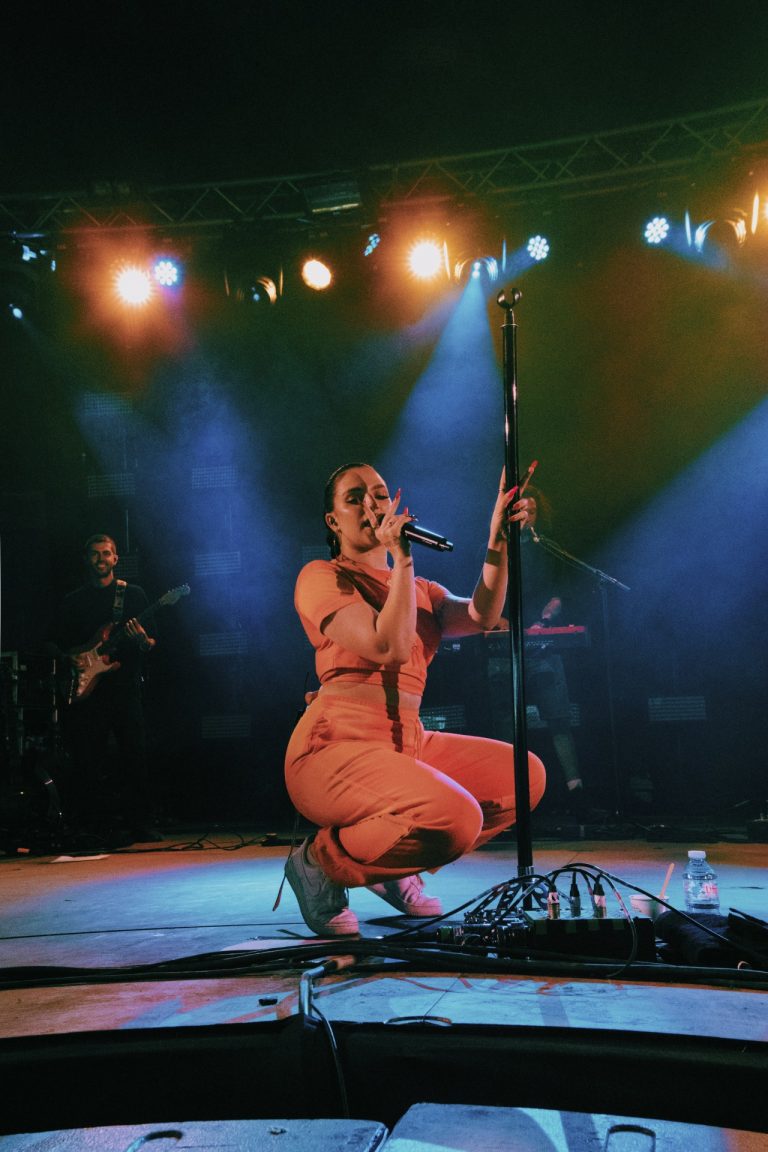 Catching Up With Mae Muller

With co-signs from none other than Sam Smith and Little Mix, North Londoner Mae Muller is fast becoming a chart favourite, with a flair for witty songwriting and a natural talent for storytelling. Collaborating with NEIKED and Polo G on her massive hit and feelgood pop banger ‘Better Days‘, Mae has taken social media by storm, conquering both the UK and US in addition to racking up an impressive 178K uses on TikTok and counting.

Like many artists, Mae was forced to cancel her 2020 concerts, but with the live music industry back up and running, we were treated to Mae’s first live performance of 2021 at the iconic Reading Festival. This summer we were lucky enough to catch up with Mae after her incredible set for an honest discussion on songwriting as a coping mechanism, throwing it back to the early days of the pandemic, and how she’s kept up her positive outlook on life.

What got you started in music, when did you realise this was what you wanted to do?

I was a late bloomer. I always loved it. I loved attention when I was little. But I never knew how to like get into it professionally. And then I was working at a pub and I didn’t feel so filled in that. And so I just put a song on SoundCloud. I had one family friend that knew how to work logic. So I gave him a bottle of wine for payment because I was broke and then we did the song together and then from then was how I met my management and you know, got my name out there a little bit. And now I’m at reading, so that’s cool!

What would you say is your favourite thing about being a musician?

I’m not just saying this because we are at a festival but performing live is my favourite. My favourite part of the whole job. I love it so much. I think it’s so amazing to actually be able to see how your music is being perceived and the energy that the audience give you it’s just insane. I love it and I enjoy having a little chat with the crowd and ask them if they’re all right and stuff.

The energy at your set in Reading was absolutely incredible, and the fans absolutely loved singing along. How was that experience for you?

Awh thank you so much, honestly what I love seeing is when all the boyfriends that have been dragged there by their girlfriends and they’re lowkey like “this kind of slaps!” that makes me laugh. But like I said I’m so grateful for the support from everyone, it makes me happy how everyone perceives my music.

Can you tell us about the songs you’ve written about men in your life? What made you write these? Do you feel there’s a lack of honesty in the industry when it comes to these topics?

There are definitely a lot of strong women that I’ve grown up listening to Lily Allen I absolutely adored, Florence and The Machine, Amy Winehouse. So that was kind of what made me want to write like that. And I went through times in my life, especially being as a child and a teenager, where I really, really liked didn’t stick up for myself. And I feel like it was hard for me to create boundaries and protect myself in that way I kind of let people walk all over me a little bit. So this has been kind of my way of building that up and protecting myself and having that armour like writing because I’m not a very confrontational person. Like, in my day to day life, I find that quite hard to stand up for myself sometimes, so yeah doing it through music really really helps me and then seeing it help other people as well that’s what makes it all pay off.

Talking of songwriting, is there a certain way you write your songs?

I mean, I wish I had the formula that every time but it’s different every single day. Like usually I don’t even have an idea of what I’m going to say. When I go to the studio, but you know, if something’s bothering me or on my mind. Something will come out eventually. But I don’t really like writing at home on my own. I quite like to do it in the studio. I just want to get out and see what happens. I love working with people as well and it kind of brings bring out the best of me.

What topic does ‘Better Days’ explore? What’s the story behind it?

Better Days- is a feel good beat- I mean after all this rubbish that everyone’s been through, it’s just a feel good like pop banger. It’s fun, it doesn’t take itself too seriously but it’s got it’s got a bit of vulnerability to it which I don’t usually give away- I kind of keep that hidden away like most of the time but it’s just realness really. The song is based around a heart-break, and that yearning of wanting to feel better again, and go back to your old happy self, but it can have so many other meanings. I think we have all been through such a strange 18 months and we could all do with some better days.

What was it like to collaborate with NEIKED And Polo G and can we expect more collabs?

It was amazing to collab with NEIKED and Polo G! They’re both so talented and brilliant in their own ways. We’re all so different but that’s what makes it so special. You can expect more collabs in the future, it’s too much fun!

Your work has had an incredible reception on music platforms, tell us a little about what that feedback has been like for you…

Oh of course it feels good, you know. You write a song- you know I could sit here and be like “I write this myself” but that is a lie. I want people to hear them and also enjoy them. I just want people to like them, so to see that people are really loving my stuff it’s reassuring and it’s good and it makes me wanna carry on doing this.

There’s definitely a theme of immaturity and men throughout your music, is that just a small part of how you feel right now?

I mean we’ve all been through this- I guess I feel like at one stage of my life I was angry. And now I’m like, “I’ve done that now”. And of course I’ll always be part of my writing like being sassy. I think now I’m like, “I’ve got the anger out and it’s helped me to talk to a lot of other people”. And now I can kind of explore other other elements.

Let’s talk about the new album! What can we expect from that?

I’m so excited about this album. It shows more of a vulnerable side, which feels really therapeutic to start showing. Everything just feels better, the music, my writing, my voice, it’s just all coming together really amazingly. I still don’t have a title, I better get on with it!

Which musicians did you look up to when you were younger? Do you still feel the same way about them now? Or have your feelings changed?

Yeah, I mean, like I said Lily Allen was a big inspiration to me. She made me realise that you can be yourself and keep your accent; you don’t have to sing with an American accent if you’re not American and I really appreciate that because I want to sound like me. Florence And The Machine I adored, she was one of the first artists that I saw live when I was 11 years old and I was like “I literally love you!” I tried to write my songs like her- when I was around 10 I wrote a song about my boyfriend turning into a werewolf. It was very Florence, so I would say she kind of moulded me in that way as well.

How has it been to have live events back to normal?

It’s been the best feeling ever! My favourite thing to do is to perform and not being able to was hard. I missed singing with everyone so much, I’m so glad it’s back.

What is your number one pet peeve at festivals?

I mean there are loads; one thing I would say annoys me is like when you’re needing a wee when you’re watching someone and you don’t wanna go line up in the massive queues for a wee- you end up missing the entire set…

You could wear a nappy? Just a thought! Haha

If that were a probability then I would do it, like get me strapped in! I just wish I could teleport myself or make a clone of myself for situations like that haha

You started gaining more and more popularity around the end of 2019 and start of 2020, was it a shock for you when lockdown came along and threw a spanner in the works?

It was weird. Lockdown came on a really strange time because I went on my first headline tour in February and in March the world shut down. It was very difficult but I mean it just makes all these moments even more sweet. And you know, like, tonight was such a good show. And just seeing everyone and also being connected to the same thing. There’s not one person in this world that hasn’t been through what has happened. So it just makes everyone bit more connected. And you can tell everyone’s just happy. And everyone’s like living in the moment. It’s really nice to see.

Do you think it affected your general well-being and mental health?

I mean it was hard, you know, but it was like that for everyone. I think it was really hard for me not to think of like “What would of what happened?” “Like where would I be?” “What would I be doing?” And that kind of messed with me a little bit. I think now I’m on the path of “What’s done is done and what’s happened has happened.” I actually think I’ve come out of it much stronger, a better writer and I just appreciate it all so much. I think I’m so much more driven as well I’m like “This is happening we’re doing it, not wasting any more time now.”

One final question, did you manage to find out who the admiring band member was, that was hyping you up!?

OMG that’s hilarious! I did find out, it was Charlie Salt from Blossoms. I liked his Gucci trousers very much.