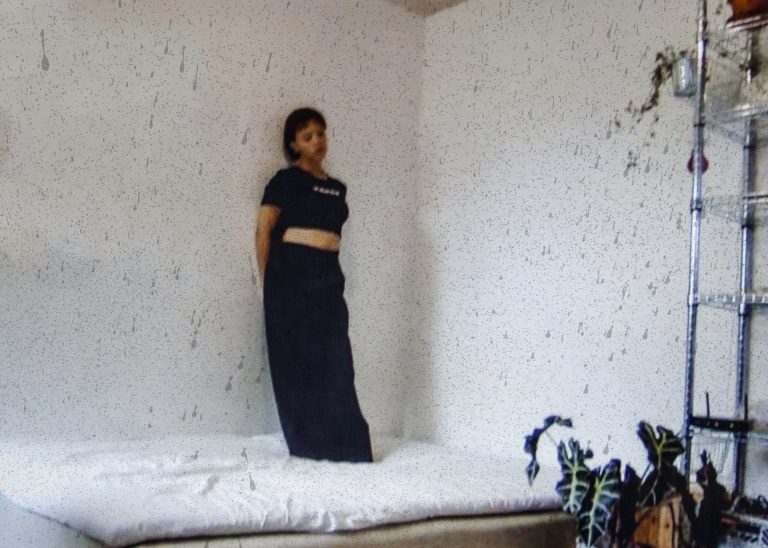 During these times of uncertainty especially, not a lot of 19 year-olds know what they want from life. Yet, for as long as she can recall, Korantemaa has always wanted to be a musician. The singer/songwriter claims that there is nothing else that she could imagine herself doing. The Swedish singer slowly rose to recognition through her cute song covers garnering hundreds and thousands of subscribers. Most notably, her rendition of the throwback smash hit Sweater Weather by The Neighbourhood which now has almost six million views on YouTube.

Now, Korantemaa is ready to debut this talent on her debut EP ‘a place of substance’. Where she showcases her more solemn side as she sweeps and swoons through feather-light synths, soft vocals and a haunting atmosphere. We speak to the alternative artist about her FaceTime shoot with us, the definition behind the EP title and the art of never settling.

When did you decide that you wanted to properly pursue music?

For a long time I tried to figure out what I wanted to work as, and being an artist wasn’t anything I ever really considered. But soon I realized I couldn’t picture myself doing anything else. Nothing speaks to me the way music does.

What song made you first begin to fall in love with music?

I have no idea actually. I’ve been in love with music for as long as I can remember, and music has always been present in my life since I was born.

“a place of substance” is an incredibly unique and interesting name for an EP- could you explain the thought process behind that?

Finding a sound I was comfortable with was a struggle when I began working with producers. I wasn’t happy with the songs that came out of the sessions I did, nothing felt right and it was very frustrating. But after a while, things finally started to work out and I found a place where I wanted to be musically. ’a place of substance’ is a collection of songs that came very naturally to me, songs that marked the end of a period where I couldn’t really find a meaning in the music I made, a period where everything I did felt bland and boring and meaningless. So with these songs I finally found a place of substance.

What’s the meaning behind the cover art of the EP?

I wanted something abstract for the cover art as I felt it would match with the songs. I asked my sister if she would be up for doing the cover art since she understands me better than anyone, and we have similar aesthetics as well. When she sent over the cover art she made, I absolutely loved it.

What is your overall message with this body of work?

You should never settle for something that doesn’t feel right. Finding that certain place where you really feel that there is meaning is hard, but when you find it, it’s so worth it.

Which song means the most to you on this project and why?

’matches’. I remember going into the studio with Ed Thomas, the one who produced the song, and I had a long rant about how tired I was of making music that didn’t feel right, and working with producers who didn’t have the same vision as me. And then we made that song in like 4 hours. It just felt so natural. And it was so amazing to finally have a song that I was proud of.

You just released visuals accompanying the works process, should we expect more post lockdown or even sooner?

I haven’t anything planned actually, but I usually don’t plan very far ahead. But I like doing visuals so there will definitely be more of it in the future.

Speaking of lockdown, how are you finding ways to stay creative?

I have started to produce music myself, so I’m doing a lot of that. I’m also making handmade merch. But I’m doing mostly the same as I did pre-lockdown; making music, sewing, cooking, and stuff like that.

You recently did a photo shoot via FaceTime for us. What was that experience like?

It was a special experience, I’ve never done anything like it. I was a bit nervous about how it was going to turn out, but it actually went well and was a lot of fun.

How would you describe your artistic version and how do you stay true to this?

I have a pretty clear vision about what I strive to be artistically but I always have a hard time describing it. I guess it’s partly because I generally don’t like describing things, especially not when it comes to art. I think explanation kills art to some extent. For me, it’s important that every person gets to build their own perception of me and my music.

What artists inspire you the most? Any Swedish acts?

Any artist that does their own thing inspires me. It’s hard to stay real and true to yourself in the music industry so I really admire the ones who do.

Throughout these trying times, what is your favourite thing about humanity?

Our ability to adapt to basically anything is pretty amazing. And that we are able to find humour in these dark times.

What is your ultimate goal in life?

To survive, lol. Getting rich would also be nice.