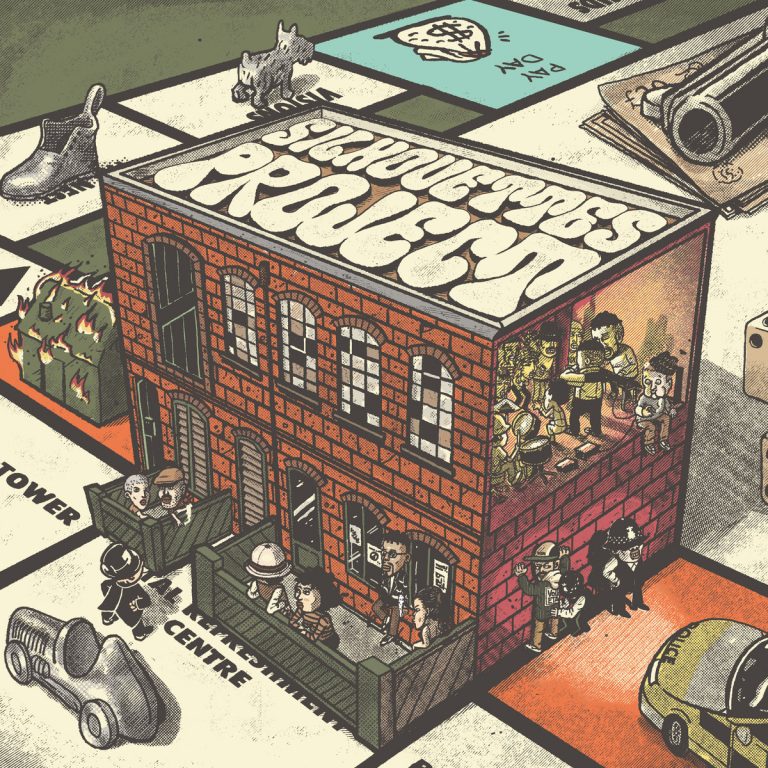 Learning About ‘The Silhouettes Project’

As the effects of gentrification kick in, the heart and soul of local communities vanish or grow stronger in some cases including the community music project ‘The Silhouettes Project’ located in Hackney’s Total Refreshment Centre. Asher Kosner and Jaden Osei-Bonsu utilise their contact books and open the door to the music scene with a pinnacle of an LP.

Founded by Asher Korner,  known as Kosher, and Jaden Osei-Bonsu, known as Eerf Evil, they aim to provide a nurturing space for artists and a helping hand navigating their way through the not so glamorous music industry: “We offer a chance to work in a high-quality music studio, build connections, perform live at our events and most of all be a part of a community that shares the same visions, that isn’t reliant on who you know or trying to boost peoples egos. But more on the quality of music and how authentic the individual is”, Eerf explains.

Now, let’s go step by step. Noctis picked the founders’ brains on who they are, what is their mission statement behind ‘The Silhouettes Project’ and what they work to accomplish.

Could you both introduce yourselves and tell us what you do outside of The Silhouettes Project?

Eerf – I go by the name of Eerf Evil, and outside of running TSP with Kosher, I am a community organiser and Grants Manager at the Paul Hamlyn foundation. I work towards ensuring community organisations and groups can get the funding they need to continue the amazing work they do. Besides that, I have been a Youth Worker for the past 8 years.

Asher – I’m a rapper and a producer originally, going by the name Kosher. Few years back me and a couple friends started an organisation called ROOT 73 which is now a non-profit creative hub in Hackney for young artists to develop their craft. I also work at Atlantic Records where I gain insights into the industry and try to bring them back to the community around me.

How did you come up with the concept for The Silhouettes Project?

Eerf – Myself and Kosher felt a joint frustration within the music scene. We met up in 2018 and spoke about all the things we could do to create a more inclusive platform for developing artists. We wanted to provide a platform that nurtures hidden talent and brings them into the forefront. Kind of why we went with the name ‘The Silhouettes Project’ – to shine a light on those within the backgrounds of the industry. We wanted it based around collaboration and community, so we decided to pair up artists with other artists whom they may or may not have worked with before. This was to encourage connection. And from there the Album was born.

Asher – We definitely felt frustrated but I think we also saw a gap in the industry, and a hope that things could change for artists like ourselves. I think that we recognized a shared desire to work in music but also to do something with a strong social message.

What is it you offer to up and coming artists?

Eerf – We offer a chance to work in a high quality music studio, build connections, perform live at our events and most of all be a part of a community that shares the same visions, that isn’t reliant on who you know or trying to boost peoples egos. But more on the quality of music and how authentic the individual is.

Asher – I’d also add that we offer artists the open door into a whole scene. It’s well on the way to being that anyway

How did you get the word out?

Eerf – Me and Ash stressed out all our connections, me being an artists in the underground scene, I knew quite a few people who were really dope, Ash also has many contacts. We decided to call/message everyone directly and build it from there. Once the sessions had started we decided to put on a live jam with our very own house band so that we could connect everyone and build the community. It kind of grew naturally from there!

Asher – When we came to creating the album, we got together and wrote all the names of the artists we knew on a whiteboard, and began drawing lines between the names of who we thought would work well together in a session. Once we had about 10 groups, we started reaching out and organizing the sessions. We were reaching out to artists individually and telling them about the project and inviting them to sessions, and then as Jaden says once we had the events up and running, everyone could see the project in the flesh!

How did you get involved with Melting Pot Music?

Eerf – I knew of Melting Pot through Summers Sons whoo were a part of the project and had released through them previously. I spoke with them initially to let them know about the project and from there we built a relationship! It was sick to have them a part of the journey and not only that but them understanding exactly what we are trying to achieve!

Asher – Big up MPM. They came on board just as we went into lockdown and it was such a blessing to have them on board. They made sure that the album reached its potential. Nothing but love for them.

For the past fifteen weeks, a single was released each week to culminate into an album release today. The LP features artists like Lex Amor, Bel Cobain, Summers Sons, Kofi Stone, Natty Wylah, KeepVibesNear, Meron T, and many more.

Who was the creative mind behind the LP?

Eerf – SagaUnoooooooo – He created the artwork which is insane. We wanted something of the same quality that we had put into the project ourselves. santiago who is also featured as a producer on the album put us in touch with SagaUno who is based out in Columbia. Myself and Ash started to think of the concepts that we wanted the project to be based on and something that played heavily on our hearts was the Regeneration otheriwse known as ‘Gentrification’ and loss of spaces in our local areas. We sent over a few sketches of what we were thinking and how it could look and Saga did the rest!

Asher – We knew the artwork had to encapsulate everything that had gone into the album which was a crazy brief to be giving a designer. But Sagauno came to the TABLE! He worked from Colombia, doing zoom calls with us when he was just waking up because of the time difference. And he fully understood the themes behind everything. We sent him hundreds of reference photos and videos of us in the studio and at the events, and he created the artwork based on what he saw. Incredible.

How did the creative process look like of writing and producing all the songs?

Eerf – It was very different for every artist – but the process was started in the same way. We would organise a session at our community studios ROOT73 and bring the artists together who were collaborating. Would give references of the sounds and the feel we were trying to create and then gave it over to the producers who would start. The artist would then get their own feel and begin to write.

Asher – part of the process was also the vibe which we aimed to create and spread through the album. We wanted all the artists to really understand the concept, in the hope that that understanding would inform their creativity. And I think that mostly it did the job. Sometimes you’d have a session finishing in the studio, and an event getting started in the next room. So the vibe was there!

How did you choose the artists featured on the album?

Eerf – We initially had a planning session that consisted of me and Kosher with a massive white board with a list of names as to who we wanted featured, some of which were from our community, others a bit further out. We then started drawing lines and pairing them up based on sounds and feel! Not every session was this straight forward, but this was the initial process behind it!

What is the LP supposed to represent?

Eerf – The LP represents our culture, where we are from – the need for creative community spaces for local people to create amazing pieces of work!

Asher – it represents the collective effort of the community to come together and create a body of work that speaks to the issues facing us as a group.

What was the feedback like from artists, sponsors, other creatives?

Eerf – Everyone who has set eyes or listened has loved the project and can’t wait for a second volume!

Are there any other projects put in place in response to additional strain on the arts community due to the pandemic?

Asher – yes there are loads I think, I wouldn’t say TSP is really aimed at responding to the pandemic, but more the social issues that were present before and will be present afterwards.

Are you thinking of opening up more spaces in the future?