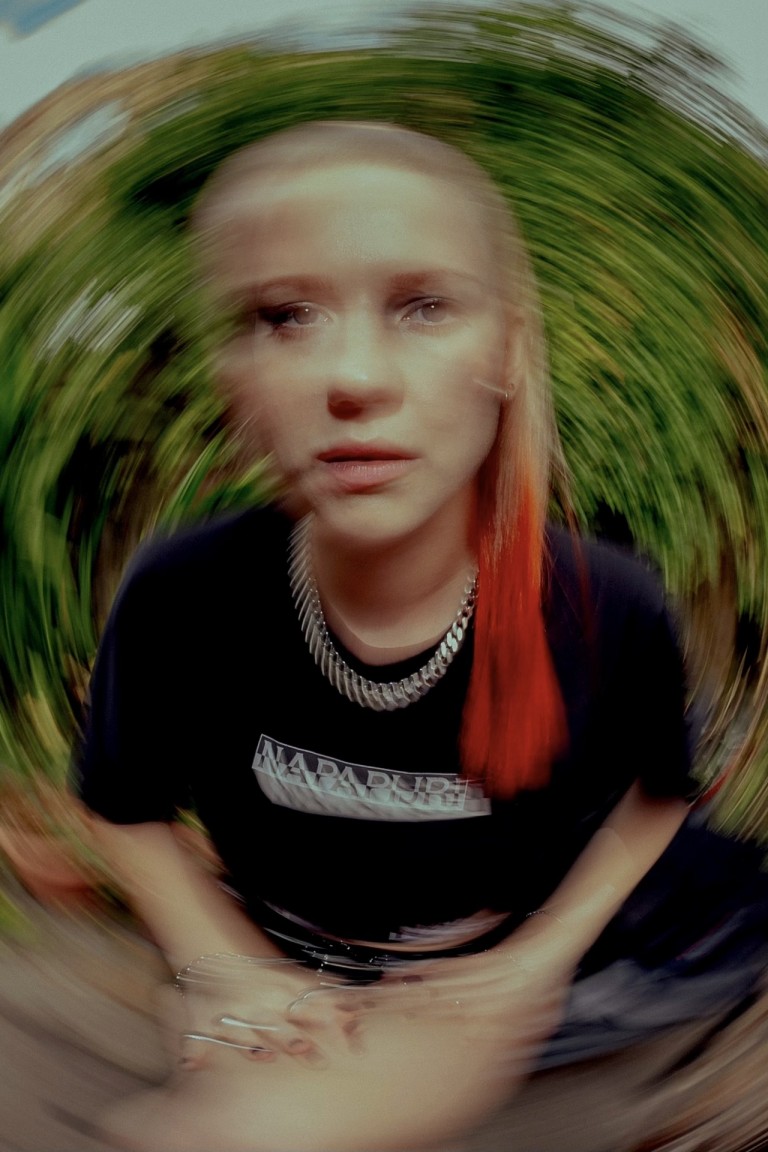 London-based songwriter LEVINA exploded onto the scene in 2017 when she appeared on Eurovision as Germany’s candidate. The accompanying single ‘Perfect Life’ has since racked up millions of streams, and the artists talents were instantly showcased to viewers across the globe. In the years since she’s released her debut album Unexpected, and a seven-track EP titled ‘Thinking In The Dark’, which have proven LEVINA to be an incredibly thought-provoking lyricist whose voice never fails in transmitting powerful emotions.

Now the artist returns with the single ‘Danger’ an enticing pop-rock anthem that delivers a statement about society’s unhealthy and often sinister habits. Describing the track as a ‘Call to action’, LEVINA was inspired by climate change, inequality, as well as the ongoing war against women’s rights, citing the overturning of Roe v.Wade in the US as the perfect example of this. By putting politics into her music, the artist is using her platform for positive change and advocating for a better world to live in.

The single also comes accompanied by a music video, directed by Sam Rockman on location at the Barbican. Shot on a wide lens that showcased the brutalist architecture of the area, the artist chose to strip back on glitz, instead staring straight into the camera, delivering a focussed narrative that draws an instant connection with the viewer. ‘Danger’ draws on serious issues in the world that many artists choose to avoid and in so doing, LEVINA struck a chord with us, and we just had to know more about the release. Below, the artist delves deep into her creative journey to date, the power of using your artform to invoke thoughts in people, and what we can expect from the artist throughout the rest of the year.

Hey LEVINA, thanks for taking the time to answer these questions. Firstly, how exactly did your journey into the music industry originate?

Thanks so much for having me. Big fan of your magazine! I think I always knew that I wanted to do music. The first music memory is me being in the garden of my childhood home and making up songs about butterflies when I was like six years old. My mum used to play the piano in the house, so quite soon I would sit at the piano for hours too and just play and write. I then started having singing and piano lessons when I was nine years old. Also, my dad is really into music, and he’d always show me the best new music videos. He also plays the guitar, so we’d often play music together with my sister. When I went to music college in London is when I took it to the next level and knew that I wanted to do nothing else. I’ve tried other things along the way, but they only made me realise that the only thing I want to do is to make music.

You grew up in Germany, what was the music scene like for emerging artists? Was there a lot of opportunities available?

I only lived in Germany until I was 16 years old actually, which is when I moved to the UK, so I don’t know exactly what the scene is like now. Live music is definitely really appreciated though. I grew up in a city called Chemnitz, which isn’t that big, so when events happened everyone was always super excited and supportive. Chemnitz actually used to host the biggest Hip hop festival in Germany called ‘Splash’, so I feel like there were opportunities for Hip hop and rap genres around that time. There was also definitely a creative underground scene, and some cool artists came out of that area, like the German band Kraftklub. But there wasn’t anything like BBC Introducing that supports emerging artists on a national scale from my experience.

You broke through with your single ‘Perfect Life’ in 2017, how important was that moment for your development?

I think the simple answer is, it was an extremely important moment. It was an amazing experience, but it was also an emotional rollercoaster. I am super grateful I got to release ‘Perfect Life’ and my album ‘Unexpected’ with a major label and have a chance to perform in front of a huge audience at Eurovision. It definitely was a game changer in my career, as I managed to reach a bigger audience with my music and tour Europe. I’ve learned a lot from that experience as well though. My passion for music comes from songwriting. Putting my thoughts to music and the way music allows me to express myself, is what I love about it. ‘Perfect Life’ was actually written by some amazing writers, Dave Bassett, Lindy Robbins, and Lindsey Ray and produced by Roland Spremberg, but the fact that I wasn’t more involved in the creation of the song always felt like a shame to me, because I felt like I couldn’t express myself and connect with the song fully. It made me realise how important it is for me to be creatively involved in all aspects of my projects.

Since then, your sound has evolved and your latest single ‘Danger’ is a powerful pop-rock anthem, what influenced this change?

Yes! You know when I released my last album, I just got signed and everything happened really quickly. I had a great time with the team at the label, but I didn’t feel like I had a lot of creative control over what I was putting out. The last album was quite a happy and polished version of myself, but I felt like it was missing the deeper side of myself. In my life and in my songwriting I get so influenced by what’s happening in the world around me and by my mental health. Dealing with depression also means I constantly question the small and the big things in life. With my last EP ‘Thinking In The dark’, I explored much more of the emotional side and with ‘Danger’ I’m also allowing myself to be angry at the system and its inequalities and put politics into pop music. The change in music really reflects who I am right now. It’s the full picture, the full range of emotions and that is constantly changing too. I hope the listeners are enjoying the journey with me, going through happy and sad times together.

‘Danger’ draws on important social issues we’re experiencing currently, could you tell us a bit about the inspiration behind the track?

The inspiration really comes from all the injustices that are going on in the world. I would be watching the news and wondering how we are the most intelligent species and at the same time the most evil. People often blame ‘society’ or ‘politics’ for the issues in the world, but at the end of the day it’s us – humans – that put all these structures in place. It’s you and me. And we could do something to make this world a better place, be kinder to each other, not join the race for money and power, and making sure that the Trumps and Johnsons in this world don’t stand a chance. I don’t have the one right solution, but I’m here to ask questions. ‘Danger’ is directed at each and everyone who can make a change, do good things in the world and take responsibility. I know there are a lot of good things happening too and of course there is a lot of layers to this, but basically, I’m just a hopeless romantic and hippie, singing about peace and love, but doing it in a ‘Call to action’ kind of way.

You write rather passionately about how as individuals we only take note when issues begin to affect us, how much of this do you think comes down to social media and the hyper-reality we seem to be living in right now?

Absolutely! I think social media is such a great tool. You can use it to raise awareness about issues, share your thoughts and connect with people. But sadly it sometimes seems like it’s easier to share a post or story on social media and then forget about the actual issue behind it, than to actually do something about the problems we are facing. Climate change, inequality on so many levels, wars, overturning Roe v. Wade are just a few of them. The attention span is so short on social media, so I fear that the attention span in real life is also suffering from it. Unless it affects people directly in their personal life, things can be forgotten very quickly, until it’s time to share the next post.

Do you think more artists should use their platform to bring to light such injustices in the world?

I’m not here to tell anyone how to use their socials, but I do believe that people who have a huge engaged following with people who look up to them and are influenced by them – I mean they are called influencers for a reason – have an amazing opportunity and also a certain responsibility, I would say, to try their best to raise awareness on issues and make the world a better place. But I also understand it can be difficult because you might not want to share personal views and spend all your time in an online debate.

The single also comes accompanied by a music video, what was the process like in turning such themes into a visual story?

The idea for the music video was quite simple. Sam Rockman, who directed and edited the video, and I just wanted to make a powerful performance video. I think the lyrics for ‘Danger’ speak for themselves, so we just wanted the viewers to feel like I’m talking to them by looking in the camera. We filmed it at the Barbican, which is just such a great place for it. It was shot on a very wide-angle lens so the viewer is able to see the surroundings whilst also being close to me.

You’re now based in London, how does the creative scene compare to other places you’ve lived?

Like I said I almost only know the London music scene, as I’ve lived here for many years. And I love it. There are so many opportunities and especially a lot of incredibly talented people. I think meeting so many exciting creative people that you can connect and work with is one of my favourites things about the city. And as much as I love London, I think it’s probably also one of the hardest places to be creative in. It’s expensive and competitive. But it can be magical. I also really appreciate the creative support that’s available, especially organisations like Help Musicians, BAPAM, Featured Artists Coalition and PRS Foundation, who do amazing things for artists and who have personally helped me a lot on my creative journey.

What can we expect to come from you throughout the rest of the year?

I’m so excited to release new music again, so you can definitely expect more of that and there might be some live shows coming up too.