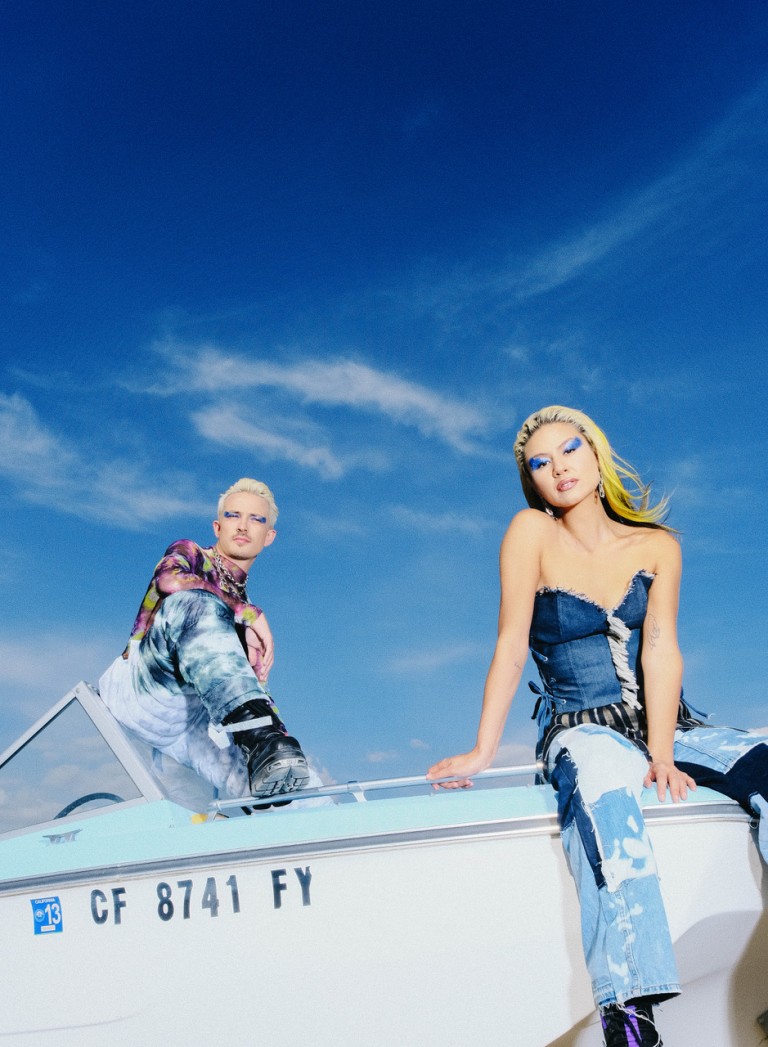 AR/CO | The Power of Collaboration

Under the moniker AR/CO, the creative duo of Mali-Koa and Leo Stannard have quickly taken the electronic world by storm. After many years spent honing their craft individually behind the scenes, gaining credits on tracks by the likes of Camelphat, G-Eazy, and Sigma, they came together in the midst of the pandemic to kickstart the project. Soon collaborations alongside Will Clarke, JADED, and Don Diablo, gained millions of streams and their first original production ‘Call Me By My Name’ showcased an addictive, feel-good sound that instantly resonated with listeners.

Now the artists return with ‘Night Feels’ an escapist, liberating, summer dance anthem. Much like their creative process, the track celebrates the pure joy of living for the moment and the many wonders that comes with it. Written in LA whilst they were surrounded by close friends, ‘Night Feels’ tells the story of the perfect person to be around in a night-time setting, whether that’s at a festival, a sweaty club, or a mid-week chill, it invokes a feeling that only a few special people can induce. It’s yet another production in their growing back catalogue that pushes an emotion of unity and togetherness, something that was so lacking when they began making music together.

Arriving alongside a futuristic music video that contains a psychedelic edge, ‘Night Feels’ is everything that AR/CO is about – electronic music with a true emotive touch. It’s a unique sound and one that we had to learn more about, so we sat down with duo and chatted about the new single, the power of collaboration, and the wonders of letting go when creating. You can read it all below.

Hey AR/CO! Thanks for taking the time to answer our questions today. How did you both come together to form a creative duo?

L: No lie, now we spend every day of our lives together.

You both come from successful writing backgrounds, with credits between you on songs from the likes of Camelphat, G-Eazy, and Sigma. How different is the creative process working together as opposed to alone?

M: It’s definitely different, you gotta always serve the artist in their storytelling. When we do AR/CO stuff it’s just an extension of us, so it feels a bit more driven by our musical taste.

L: We don’t think when we do AR/CO, we just follow our instincts, trust the process and sometimes it’s magic.

You burst onto the scene In the midst of the pandemic gaining plaudits immediately thanks to collaborative singles ‘Run Run’ and ‘Hot Air Balloon’. Were you taken aback by such a reaction?

M: I mean, we’re just standing on the sideline of these amazing songs also fan-girling over them with people. So can count us as part of that reaction.

L: We’re lucky enough to collab with such amazing people all the time so we’re just rolling with the good times.

Since then, the support has only continued with your collaborative single with Franky Wah, ‘Under The Sun’, hit Radio 1’s B-list playlist, whilst ‘Call Me By My Name’ received airplay from Sir Elton John. What’s been the key to your success to date?

M: 3L of Gatorade, steady supply of snacks and the energy to dance and create from the wonky place. Putting out stuff that matters to us, and not overthinking it.

L: Not overthinking is the one. Follow your heart and the success will follow apart from when it doesn’t.

Continuing to ride the wave of momentum, you’ve just released the single ‘Night Feels’, an emphatic, feel-good, summertime track. What was the inspiration behind it?

M: Night Feels is inspired by late night fun, meme worthy moments, debauchery, and youth. It feels almost like the theme of a coming-of-age show. I don’t know, maybe like Girls or something. I can only imagine it [the show] set in London though.

L: We want people to feel free when they hear our music. This song just came out of us so quickly in a writing session so we went with it.

When it came to creating ‘Night Feels’ did one of you take the lead in production and the other on vocals? Or was the responsibility equally shared?

M: We share everything these days. We’re both pretty hands on, won’t lie though Leo came to the studio with a semi-produced version of Hot Air Balloon after a shower inspo moment and that was very impressive to me. He’s super talented.

L: We basically do everything together, whoever’s least tired/hungover on the day might make it more of a 60/40. But we like to bring in other producers as well to keep things fresh.

The single comes accompanied with a futuristic music video that embraces a real psychedelic edge. What influenced this style and what’s the visual story behind it?

M: There’s an element of happiness, fun, eccentricity to our songs and the world we’ve built. We just wanna keep it light and moving.

L: The video is all about the feeling. Sometimes you’re not even sure what’s going on, but it feels exciting and free.

A key component to your musical ambitions is creating a sound that embraces unity and togetherness that was so lacking during the pandemic when you formed. Is this quite a difficult emotion to quantify during the various stages of the creative process?

M: We try not to think too much anymore! When people hear it and see it something clicks, the universal truth of letting your hair down and having fun we just try to keep that at the centre of what we’re doing.

Since you came together to form AR/CO you’ve placed collaboration at the heart of what you do. Just how important to you is working with fellow boundary pushing artists?

M: There’s so much fun and expression going on in the industry now, the music feels fresh to us. I reckon working and collaborating with those guys is so important for us, it’s crazy to see what two artists can do when they come from different spaces.

What plans do you have in place for the rest of the year?

M: Our live AR/CO WRLD show is next on the agenda October 26, if you’re UK based please come along. Otherwise, we’ll be wrapping a few songs up and hopefully shifting them out into the world getting ready for 2023!

L: The show is so exciting for us. We made this idea whilst visualizing what it’d be like live so for us this is what it’s all about. We have what feels like hundreds of half produced songs so we’ll be figuring out which ones we want the world to hear!