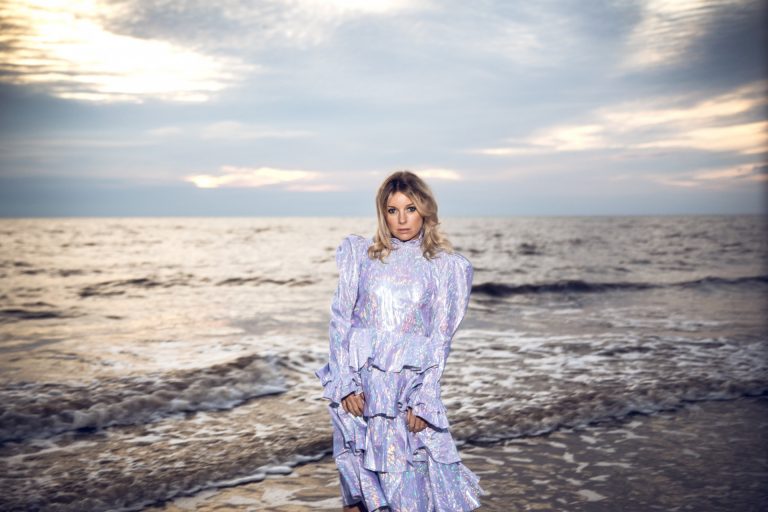 Little Boots: The Girl Who Dared To Dream

Grammy-nominated songwriter and producer Little Boots does not need any introduction. The ‘New In Town’ songstress shares new singles, ‘Crying On The Inside,’ and ‘Out (Out)‘ from her upcoming album ‘Tomorrow’s Yesterday.’

Initially written for Carly Rae-Jepsen, ‘Crying On The Inside’ has always been a favorite. After re-recording the track for herself, Little Boots has decided to put it on her album: “Ultimately I think it’s just a classic happy-sad pop song.” Later, she also says it’s about ‘putting a brave face despite personal challenges,’ which we all can relate to.

Looking at the career of Little Boots today, it seems like she’s always had a plan, and she stuck to it. But that is not the case. At a young age, as a little girl, she exchanged ballet shoes for piano lessons, and along the way of joining new bands, she dreamt of being surrounded by music in any shape or form. Singing was not the goal at all.

After some time, under her stage name Little Boots, she dared to dream, focused on her gut feeling, and believed in herself. “I knew we were building something special,” she says as she talks about the Little Boots mega-hit ‘New In Town.’

Little Boots perceived it as the push she needed to step up her production skills during the continuous period of isolation and lockdowns and lack of human contact. Fast forward to today, her upcoming album ‘Tomorrow’s Yesterday,’ set to release on March 18th, is all written and produced by herself.

Find out more about Little Boots in our conversation below.

What have you been up to in the last couple of months?

I’ve been mainly focused on finishing my album which is out in Spring. I’ve been working hard on the final mixes and all of the artwork to make it really special, as well as running my Patreon channel and shooting music videos. I also did a couple of live shows in the UK last month which were the first since Covid!

How was it growing up in Blackpool and wanting to be a singer?

I never really wanted to be a singer I really just wanted to be a musician and a songwriter, singing was more from necessity. Blackpool was definitely an interesting place to grow up, on one hand it has its roots in entertainment but its had a bumpy history and a lot of changes over the years.

They’re pretty different, it’s much healthier in LA for you physically and mentally and I found a better sense of community in many ways compared to London, where groups can be quite insular. But I did miss the grit and edge of London, it gives you a lot of drive… time does strange things in LA sometimes, you can blink and several months have gone.

Could you share your story of how you got started in music?

I went to ballet class when I was 5 and wasn’t very good but I loved the pianist, an old man who accompanied us. I started piano lessons straight away and trained classically. In my teens I joined bands and experimented a lot, I started writing songs. I was signed in an indie band at Uni in Leeds then eventually was signed as a solo artist.

Once ‘New In Town’ blew up in the UK, what helped you stay grounded?

Having grounded family and good close friends. Always having a strong connection and making time to visit home and my family there. I think that was really the most important thing, if you have good people around you, you can stay grounded.

What was your reaction to all of it? Did you expect it at all?

I did and I didn’t, I kind of dared to dream it if that makes sense. It’s all a bit of a blur looking back, but I knew the songs were really good and we were building something special.

How would you compare your debut album ‘Hands’ to ‘Tomorrow’s Yesterday’?

I think there are definitely similarities, in both instances I started out writing and producing by myself with a very lo-fi set up of synthesisers and piano and vocals. But I guess I’m older and hopefully wiser so the lyrical themes have evolved.

What made you want to go back to your roots?

Partially necessity as it was lockdown and I went back to my parents in the north which is actually where I wrote a lot of the first album so there was a reconnection there. Also going back to basics and really feeling comfortable in my own skin and not worrying about trying to please or sound like anyone else.

Was it the isolation of a lockdown when you decided to do everything yourself for your next project?

It was definitely a big factor as I wasn’t able to work with producers in studios so it was the push I needed to step up my production skills. I’ve always been very hands on and have been doing everything on my projects for years via my own label, but production was really the final step to be self-sufficient.

Could you tell us what your upcoming album means to you?

The album is called ’Tomorrow’s Yesterdays’, the first single from is was called ’Silver Balloons’. It’s a return to my roots, its DIY disco, it’s nostalgic but also future facing, its about growing up… overall I think its a very warm and positive album with a retro feel.

What do you want it to represent?

I wasn’t really thinking of representing anything specifically, I just wanted to get back to great songwriting and put that at the centre of everything, starting at the piano. Then I just tried to tell genuine stories and have fun with the production.

What is the backstory of ‘Silver Balloons’?

It was inspired by cancelled plans in lockdown, how the dates we were hoping for came and went with parties and events bursting in front of our face like shiny silver balloons, all we could do was hold on to each other and hope for the best!

Could you share the inspiration behind your current single ‘Landline’?

This song was inspired by how music can connect people even when they can’t be physically together, specifically I got thinking in lockdown about how when I was a teenager I used to call my school friends and boyfriend and listen to music down the phone on the old school landline. We take it for granted that we can now have dance parties on zoom and share playlists in real time.

What is your newest single ‘Crying On The Inside’ about?

It’s about putting on a brave face when running into personal challenges; something I think we can all relate to, especially in the last year or so. I personally love when songs reference other songs or records, which this does. I actually wrote the song some time ago with Carly Rae-Jepsen in mind, but she didn’t take it and the track has always been one of my favourites as one that I personally relate to. I shared the original demo with my Patreon channel, and everyone really encouraged me to re-record it for myself and put it on the new album. I tried to channel a bit of a “Fleetwood Mac Dreams” vibe , but ultimately I think it’s just a classic happy- sad pop song.”

What else do you have planned for next year?

My album will be released in March, I’m also joining the Abba Voyage band so we will start rehearsing for that and the show will open in May which I’m super excited about. I’ll continue my Patreon channel and songwriting for other artists/ collaborations also. I’m also exploring the web3 and NFT space. So really it’s going to be a very busy year!