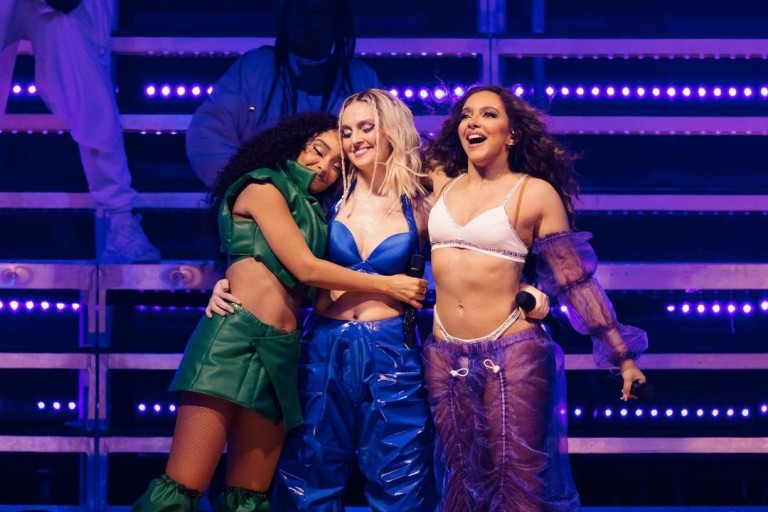 In a rather unusual occurrence for British weather, the sunshine blazes on a day when one of the biggest UK girl groups of all time prepare to take their final bow. Emotions were high from day 1 of Little Mix’s Confetti tour, with group members Jade Thirlwall, Perrie Edwards & Leigh-Anne Pinnock struggling to fight back the tears from the offset. Tonight was no different, in fact, emotions were maximised as they end an era of soaring highs spanning the length of 11 sacred years.

The bittersweet energy in The O2 arena can be felt from the nosebleeds, albeit the reason we were all here tonight was to be put at the back of our minds, at least for 90 minutes, as we sit back and witness Little Mix perform a dazzling pop spectacle that celebrates their unbreakable friendship.

The first spotlight of the night shines over 18-year-old Denis Coleman as he crusades on a mission to hype the crowd up for what would be a historic evening ahead, giving an eclectic performance to a brimming crowd of 20,000. “Touring with Little Mix was an unforgettable experience”, he tells Noctis Magazine. “To be a part of such an incredible show was an absolute honour as was being introduced to the wonderful community of Little Mix Fans across the UK, a truly beautiful, loving and empowering group”. Opening with the buoyant ‘Halogen Nights’, Coleman’s star quality is instantly apparent, even during his chatty anecdotes where you can feel how comfortable he is in an arena environment.

A string of bonafide hits resumes through Coleman’s set, from his pop-punk release ‘pillowTHOUGHTS’ to a cover of Elton John & Dua Lipa’s ‘Cold Heart’. Fulfilling his role of injecting the audience with vigorous energy, by the end of Coleman’s set The O2 had been fully prepped for the night ahead.

Denis rounds off: “As I stepped out on stage, I knew that the audience was also aware of this monumental occasion, and I could sense a joie de vivre present in every corner of the Arena. That final show was by far the best night of tour, and while I will definitely miss it, what a way to end!”

Little Mix’s The Search champions Since September follow Coleman for a set that reminisces pop music of the early 2010s, leading with a cover of Justin Bieber’s ‘Baby’ to a One Direction/Harry Styles medley to further fuel the already present nostalgia in the air. Setlist chosen wisely, we get the notion that Since September wanted us to reflect on the last 10 years, doing so by performing hits that sat alongside Little Mix’s own.

Also exhibiting some original material, Since September have long awaited to cash in their prize for winning the talent competition back in 2020, and tonight they flourished as an all-rounded four-piece that we have faith will stand the test of time.

Now, imagine having such a stellar discography that you have the power to open your set with the colossal three-week-at-number-one hit ‘Shout Out to My Ex’? Once you’ve let that, the 19 Top 10 singles and three BRIT Award wins sink in, it’s easy to recognise that Little Mix are the superwomen of the world. And quite frankly, they’ve earned that title.

Euphoric bliss followed suit with their eruptive EDM-banger ‘Heartbreak Anthem’ and glossy 80s-inspired ‘Break Up Song’ – we’re now just three tracks deep into the set and the trio’s star power has already been solidified. It’s often hard to wrap your head around how many exceptionally crafted pop songs Little Mix have under their wing, the Confetti tour being the “Greatest Hits” moment we’d always dreamt of.

It’s moments like in ‘Wings’ where we realise how much Perrie, Leigh and Jade have adapted to the music they made when they were first put together in a group, be it the change in vocal technique or the smoother tones that weren’t so present in the adolescent studio versions; tonight feels like we’re hearing these 11-year-old songs for the first time again. It’s perfect.

As the evening resumes we witness an edgier, more rock-infused version of their hit ‘Woman Like Me’ and for the first tour in history, the girls perform fan-favourite ‘Love Me Or Leave Me’ at 40 feet suspended in the air, soaring across the arena for a moment of reflectance. It was here where the bursting of tears began, not just for Little Mix as they attempt to power through friendship anthem ‘Between Us’, but for us 20,000 fans who have found comfort in knowing that the girls have our back just as much as we’ve got theirs.

Transferring back to the stage, the girls sit to take a moment of gratitude; it was here where dancer Claud voiced what the entire arena was thinking: “You’ve changed lives”, “You’ll go down in history”. A communal roar of cheers follows this bold yet completely correct statement; Little Mix is not going to be a name any of us forget anytime soon, or ever.

An encore as sweet as they come, a grand finale performance to ‘Sweet Melody’ is a joyous experience that rounds off what has been a monumental decade for the trio. Both starting and finishing the evening with number one hits, it won’t just be us, the fans that will miss Little Mix, but also their dominant presence in pop music will be one that’s irreplaceable.

Returning to stage wearing their ‘The Last Show (For Now…)’ hoodies, the girls reprise ‘Between Us’ which, once again, cements how authentic and honourable their friendship is. “If they hurt you, they hurting me / That’s just the way it be”, they sing in harmony, with us, the day one supporters, singing those same words right back to them.

As Little Mix exit the stage, it’s going to be hard to imagine a world without them. Growing up alongside Perrie Edwards, Leigh-Anne Pinnock and Jade Thirlwall and watching them flourish into the artists they unashamedly are today has been so beautiful to witness, and now we have the opportunity of watching them do it all over again as solo entities, each supporting each other along the way.

The girls promise us that: “2011-always”, it’s not goodbye forever, it’s just farewell for now, and when Little Mix makes their grand return, whenever that may be, it’ll be the celebration of a lifetime.

We can’t wait to be there.