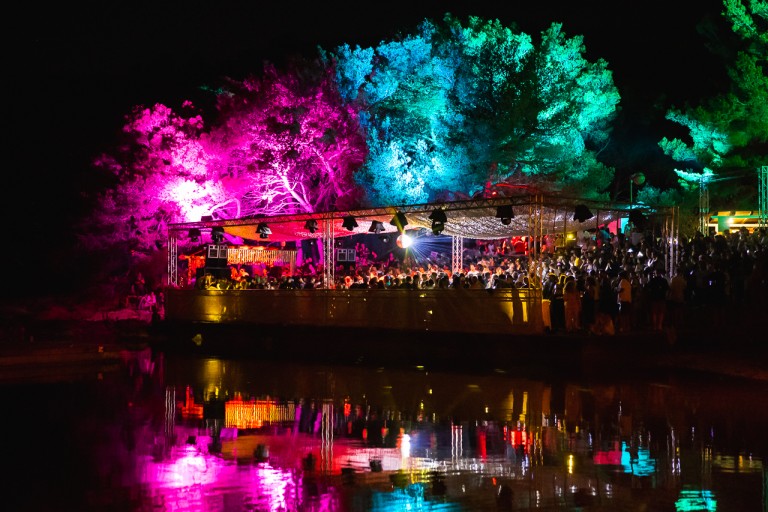 The post-pandemic festival calendar is stacked with events promising you an escape from reality, and with so many options it can be a tad overwhelming. One event that particularly caught our eye was Love International, which took place over 7 days in July, located at the idyllic setting of The Garden, Tisno, in Croatia. Run by Team Love, the Bristol based group behind Love Saves The Day festival, and Glastonbury’s Silver Hayes area. Although for the promoters Love International certainly stands alone with its unique concept that merges the high-quality dance music programming they’re known for, with the freedom of a holiday.

In so doing, the festival bought some of the industry’s most exciting DJs to the beautiful site which made the most of the Adriatic coastline. From daily boat parties to the picturesque beach stage which saw music run through until 4am, revellers were never far away from Croatia’s wonderous beauty, and such a setting only enhanced the listening experience. For those who were impartial to an afterparty, the option was just a short bus journey away at the notorious Barbella’s Discotheque – a venue consistently voted as one of the best clubs in the world.

Rather refreshingly the festival kept the capacity at a comfortable number, far below what they could have. Despite it selling out, never once did you feel tight for space, nor were you getting bumped into on the dancefloor, a credible decision by the organisers who clearly placed the experience ahead of profit margins. Noticeably such a decision drew in a mature crowd, with very few of those in attendance being under 25, although this could also be down to the cost of staying in a hotel for a week, with the additional cost of festival tickets, it certainly isn’t the cheapest event, although with Croatia changing their currency to the Euro in January, next year will certainly be more expensive.

Seven-day festivals are hard to come by, perhaps due to the intense physical demands that come with music playing for 18 hours each day. Having the opportunity to dip in and out of the dancefloor is integral and this was something Love International was very much aware of, with hammocks, beds, and seating plenty across the site, the experience never felt overbearing. With close to 150 artists playing at the festival, highlights were plentiful, with both established and emerging artists shining equally.

The opening night saw Job Jobse and Peach whip up the crowd at Barbella’s into a frenzy with an exhilarating 4 hours of euphoric house that saw both artists play solo before treating dancers to a rare back-to-back to finish. Whilst Thursday’s programming displayed just how diverse the music on display was. Life & Death label boss, DJ Tennis, delivered two hours of psychedelic dance music that spanned electro, indie-dance, and techno. Whilst the pairing of Ivan Smagghe and Manfredas that make up Dresden dance sent dancers on a on left-field journey that took every unexpected turn. Renditions of The Youngsters’ ‘The Third Knife’ and Smith ‘N Hack’s ‘Space Warrior’ encapsulated just how gripping those four hours were.

Friday saw Chinese artist, Yu Su, take to the decks with a pumping psychedelic disco set that was reminiscent of her productions on Ninja Tune’s Technicolour imprint. It was my first time discovering the DJ and composer and I was taken aback by the energy her music transmitted. Australian DJ Roza Terenzi followed with a truly emphatic display that never missed a beat. Never settling on just one style, Roza closed the Beach stage to a raucous ovation.

Saturday saw Bill Brewster, Frank Broughton, and Bruce Tantum bring their Low Life party series to the Argonaughty for an afternoon of feel-good, nostalgic disco anthems. Whilst at sea, taking in the beautiful islands surrounding you, it was the perfect soundtrack. Once more, the Beach stage played host to yet another fantastic closing set from Panorama Bar resident, Prosumer. Up there as one of the best sets of the week, the German DJ played a sweaty two hours of Hi-NRG that he’s so known for. A rendition of Revler’s ‘Vibe’ was a standout moment, whilst his decision to finish with Madonna’s ‘Borderline’ led to screams of approval.

In the early hours of Sunday morning, Shanti Celeste, Saoirse, Peach, Moxie played for a staggering 10 hours at one of the festivals notorious sunrise sessions. Although for the artists, this wasn’t a rare moment, as under the collective ‘S.A.S.S’ they’ve built a reputation for their diverse marathon sets. Credit to them, the dance floor was full throughout, and even culminated in a couple of stage dives from the artists that summed up the connection between them and the crowd. Eliza Rose’s hit single ‘B.O.T.A’ once again featured, leading to quite the reaction, whilst Xpress 2’s mind-bending ‘Muzik Xpress’ showcased the broad nature of the set.

Sadly I had to catch a flight home on Tuesday morning so I didn’t get to experience the final day, but Running Back boss, Gerd Janson, bought my festival on Monday to a close in spectacular fashion. The Garden stage was treated to an eclectic range of Italo, house, and nu-disco across four hours that also featured numerous hits from his own label, with Krystal Klear’s ‘Telephone’ and Chinaski’s ‘Fly High Again’ both leading to some rather explosive moments.

This was my first venture to Love International and Croatia and it’s hard to find many faults. The countries natural beauty is jaw-dropping and the way the festival utilises that environment makes for a truly special experience. Whilst the aspect of being on holiday in such a place was unique, the music was top-notch with a well-constructed line-up that never left you wanting for anything. Their first edition post-pandemic has set the bar high and we can’t wait to see what next years edition brings.