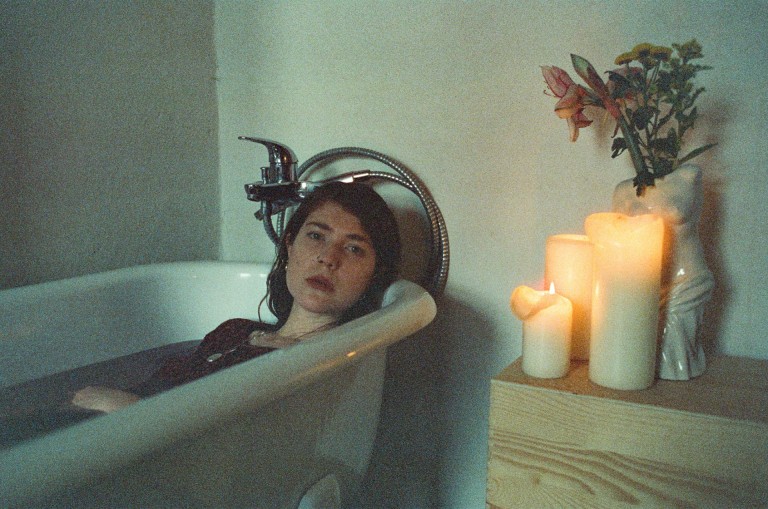 Lucy Kruger & The Lost Boys Unveil ‘Autobiography of an Evening’

Today, Lucy Kruger & The Lost Boys premiere their new single ‘Autobiography of an Evening‘. A stunning glimpse into the mind of Kruger, the song touches on the desire to cling onto fleeting moments of passion and deep connection with someone, as a means to avoid the perils of everyday life. The thought-provoking and pensive release is the third single off of her upcoming album ‘Teen Tapes (for performing your own stunts)’, and was originally penned after the artist read the novel ‘Autobiography of Red’ by Anne Carson. Kruger shares, “The song title is a nod of gratitude towards the book and the author.”

Staying true to her gritty, dark and sombre sound, ‘Autobiography of an Evening’ rattles with fuzzy, grungey guitars, thundering drums and an overall eerie delivery. Quietly haunting, Kruger creates a heightened atmosphere, captivating the listener with her soft, whispering vocals.

The upcoming album will complete the trilogy of ‘tape’ albums, wrapping up a chapter of her life and moving onto the next. With the hopes that audiences will be able to connect to her relatable themes of human emotions and overcoming life hurdles, Kruger is providing an outlet for those overwhelming episodes.

Hi Lucy! Congratulations on the release of your new single ‘Autobiography of an Evening’! Written after reading Anne Carson’s novel ‘Autobiography of Red’ the track is an ode to her work. Can you tell us more about the book and why it inspired you to write this song?

Thank you very much. I have to start by saying that I have a terrible memory and would need to speak about a book some moments after reading to do  it – or at least my response to it –  proper justice – but I will definitely keep revisiting this book… It was about a year and a half ago now, or perhaps even two, that I read it, but I remember that I was completely flawed by the unusual and beautiful use of metaphor.

It’s terribly human and yet always transcendental. So that you’re in an elevated state even when engaging with something completely pedestrian. The relationship between the strange and the familiar is riveting. It is unlike anything I’ve read before it and left me very inspired to create. To be reminded about how many different, and new ways, there are to express something. How a single moment can speak to so much. I wrote this song the day after finishing the book, when the story was still very much in my body.

It’s the third single off of your upcoming album, Teen Tapes (for performing your own stunts) and follows singles ‘Amsterdam’ and ‘Play’. Each emitting a dark and melancholy atmosphere, can we expect more of this with the upcoming releases?

Yes. In many ways it’s the aesthetic I love most, and the feeling that needs the most appeasing when I come to create. Teen Tapes is essentially a love album. Which would make you think it should be sort of light and sweet. But l find love terrifying. There is a long way to go to get there, and an even further way to fall once you do. It requires a song or two. All that pent up energy. And possibility. And probable pain.

The intense atmosphere of the song reflects it’s narrative of keeping ourselves busy in our everyday lives as a means to avoid lifes’ darker moments. Featuring growling instrumentation and rumbling percussion, the music has a menacing feeling to it. Tell us more about the writing process for this track, was it a liberating experience to put your emotions into sound?

Definitely. It was written on an acoustic guitar, in Liú’s room in Amsterdam. It sounded much sweeter then. But it didn’t feel that sweet. It didn’t fit quite. And when I got back to Berlin, I went into the studio with a fuzz pedal, which was/is still quite new to me. I very shyly put this song into a new costume and it felt much more life itself. I still feel very liberated by finding quiet ways to make a noise. When we came to pre-production, one of our bandmates, André Leo, suggested that we push it even further. Which we did.

‘Teen Tapes (for performing your own stunts)‘ is the third installment in your trilogy of tapes. How does it differ from ‘Transit Tapes (for women who move furniture around) ‘and ‘Sleeping Tapes for Some Girls?’

I suppose in many ways, Teen Tapes is the darkest in terms of sound, but also the most alive in it’s expression, which for me equates to a kind of a waking. Sleeping Tapes was written at a time where it felt very difficult to find a voice and access a feeling. It was there, but it had to be attended to very very tenderly, which is apparent in the sound. Transit Tapes is some kind of a run up. A leaning out of the door or the window. And Teen Tapes is the launch. The falling. And all of this is apparent in the sound. Teen Tapes is a lot more playful, however serious it might sound. I was building up the courage or trust to give myself the permission to play.

Described as a juvenile expression of emotion, do you feel like writing this album was a form of therapy that has allowed you to close one chapter and begin another?

Yes. It has been lovely to give this album a name that sort of excuses it from all I could have accused it of. Instead of having to watch out for the trap of falling into teen angst, I had to remind myself to give in. And probably could have even been a bit braver. But we do what we can do. It can be wonderful to frame and name something. Consoling yourself with the fact that not all of you is represented by this thing, but that you’ve given some very strong aspect of you the space to influence what you make. Surely there is somebody else who is going through this very similar human thing who might want to hear this.

Born in South Africa and based in Germany, do you think your surroundings have had an influence on your sound at all?

I think in many ways it was the act of moving away from familiarity and a clear sense of home that has shifted or influenced me more than anything else. It was very unsettling. It is very unsettling. Which is what I wanted. I think. There is very little possibility for you to not change. I also get to see a lot of bands here that I wasn’t able to in South Africa. Although the past two years have now allowed for much of that. Putting together a new band here in Berlin has also definitely had an influence on my sound. Playing with Liú in particular.

You’ve mentioned how Nick Cave and the Bad Seeds has been an inspiration for you. If you could perform with any artist dead or alive, who would it be and why?

Oh that’s so difficult. And now you’ve placed Nick Cave in my mind and it’s difficult to move him. I suppose watching somebody and listening to their music would be a very different experience to performing alongside them. It’s such a hard question to answer and overwhelms me a bit to imagine.

It sounds a bit dramatic and sentimental to say, but I do feel like I have the best guitarist playing alongside me already.

I’d also very happily be Big Thief’s merchandise person, and have the chance to watch them every night. Perhaps they’d let me pick up a tambourine every now and then.

I would also love to listen to Jenny Hval speak about her relationship to performance. I’m so fascinated by people that create in so many different ways, and what those different aspects of creating/sharing mean to them.

With a tour slated for this Spring, what else can we expect from Lucy Kruger & The Lost Boys in 2022?

I’m so excited to perform again. If I could I would just tour for the whole year. But I’ve also been working on some new music. A deviation from the tapes that I’m very excited about.