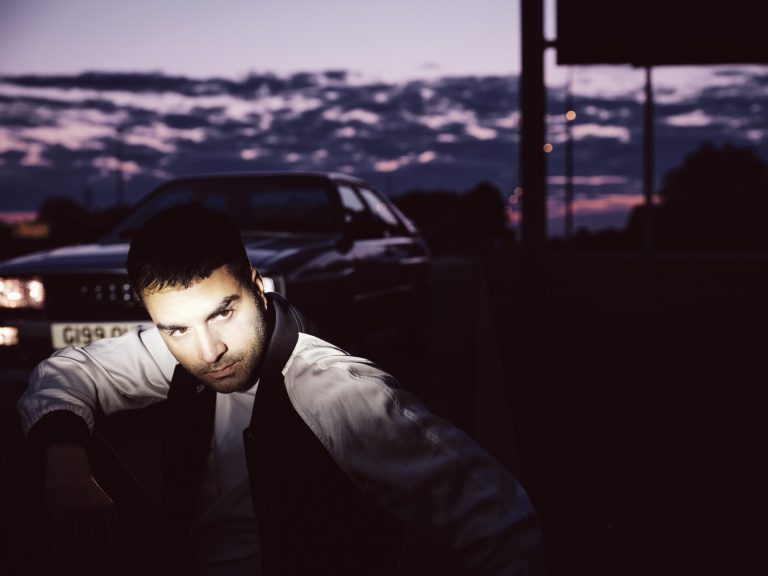 With a distinct sonic identity and immersive visuals, Mickael Karkousse is without a doubt one of the most exciting names currently rising within the indie and pop music scene. Part of celebrated indie-electronic band GOOSE, he began embarking on his solo journey a couple of years ago and is showing no signs of slowing down anytime soon.

GOOSE have carefully crafted a phenomenal catalog of rock-edged electronica over the years, receiving massive acclaim across the industry. Though he is very focused on his solo endeavors, Mickael Karkousse insists: “All of my solo experiences, I will take them back to GOOSE. It’s just like going away for the weekend, and coming back with stories and inspiration. Or new friends.”  This immense dedication has led Mickael Karkousse to many notable achievements. All the while, he gears up to share his debut EP later this year, which will feature ‘Never Give Up‘, one of his most stunning and intricate singles to date. Mickael Karkousse reveals that he always looks to find a certain romance when writing music, as he’s inspired by how cinema can move you; something which becomes apparent the moment you press play on ‘Never Give Up.’
Filled with sparkly synths, washed-out pads, and 80s-inspired drum work, ‘Never Give Up’ is a truly impressive slow-burn over its almost 5 minutes of runtime. Produced by Victor Le Masne, it holds certain anthemic qualities like its intimate vocals and an immersive arrangement that cements it as a true alt-pop masterpiece.

Talking about the song, Mickael Karkousse says: “It’s the first track that I worked on with producer Victor Le Masne. He just finished producing Gaspar Augé’s album so the timing was perfect to embark on new adventure together. We both love the sounds that we grew up with watching French television shows and Japanese animations. The warm and synth-based sounds would form the soundtrack of our collaboration. Each video of the EP is approached from a storytelling point of view, like a short film. Each song of the EP can be interpreted as a movie scene. For the video of ‘Never Give Up’ I asked my Friend and filmmaker Marnix Ruben to dig into his film archive and make a collage translating the mood and story of ‘Never Give Up’.”

Mickael Karkousse is well on his way towards building a massive career for himself, through his consistent delivery of instant classics. As audiences prepare for the release of his upcoming debut EP, Never Give Up’ will certainly act as the perfect appetizer to be kept on repeat.