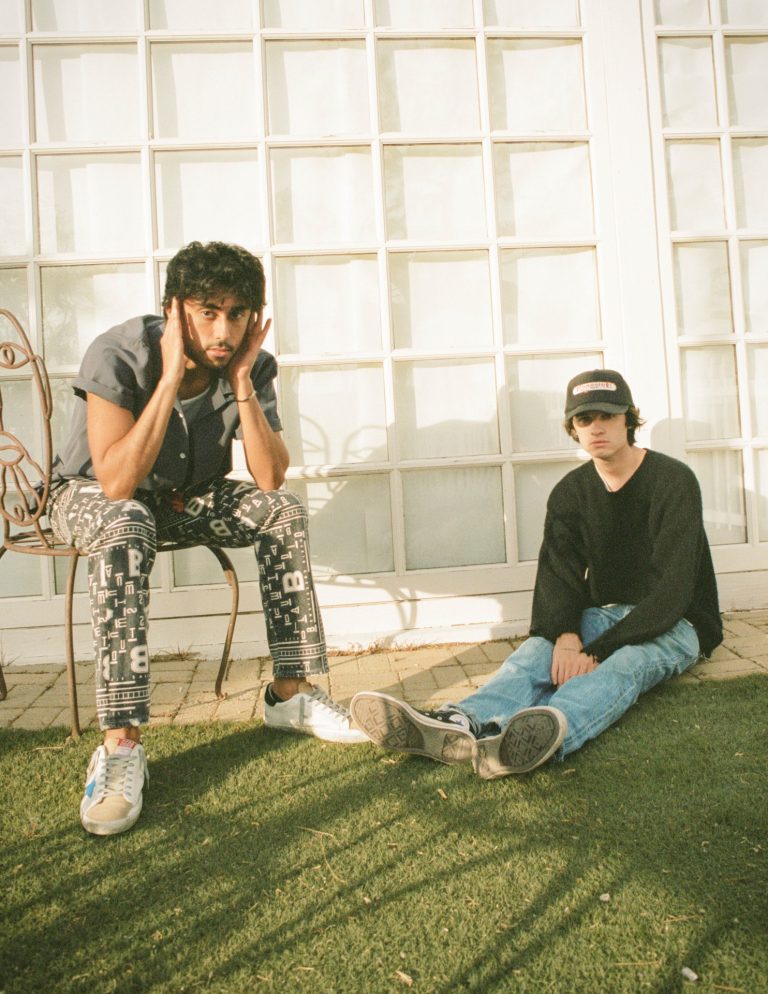 LA-based creative duo Motel 7 have been lighting up the music industry since they arrived on the scene earlier this year. Simultaneously forging their own unique take on alt-pop, whilst winning over the hearts of many with their emotive lyricism. Consisting of Anton Khabbaz and Dylan Jagger Lee, who forged together from their shared appreciation of the softer side of electronic production while students together at music school, the project has filled a creative vacuum in their lives. In January they released their debut EP ‘Reminder Not To Think Too Much’, which was originally released anonymously, however due to its astounding success – reaching over 5 million streams – the duo realised there was certainly a space in which they could flourish.

Now they return with their latest single ‘Messing With Fire’, a heartfelt song that highlights the theme of battling your emotions whilst in a vulnerable state. The song underpins everything the band is about, summer-soaked production, lo-fi infectious vibes and an emphasized approach to song writing without boundaries. Accompanied by a music video directed by Paris Brosnan, ‘Messing With Fire’ really is the package deal. We caught up with the duo to learn about the creative process behind their latest single, as well as all the things about Motel 7.

Hey guys! Congratulations on the release. How and when did the ‘Motel 7’ Project start?

For the longest time we were just making beats for fun, and there was a summer when we had a pair of speakers and a microphone set up in Dylan’s backyard. We would make like 3 songs each day at least. One of those nights we stayed up until like 5am and got high and a song called ‘On My Mind’ came out. We decided to put it on Soundcloud as our first ever release and of course, we needed a name to put it under. We just jokingly said how funny it would be if it was called “Motel 6”; but then we were like ah fuck there might be some issues with that since Motel 6 is already taken by the one and only. So, we changed it to “Motel 7” and never looked back since.

You’ve carved your own unique take on alt-pop, what’s been the main influences behind this?

We listen to such a large variety of music. It ranges anywhere from BROCKHAMPTON to John Mayer. For this release, the guitar work was definitely inspired by a lot of the songs on the Nirvana ‘Nevermind’ album. Like specifically the tone and also chords that we went for on this record give us that same timeless feeling that the guitars had on that album. Thurston Moore was also a big influence on the distorted feeling guitar sections; like especially in the songs outro. As far as the actual bare bones of the instrumental, the 808 is a perfect contrast to both the guitar work and vocals. It has that “hit you in the chest” feeling that you get from the Kanye stuff, and alot of modern pop productions you hear these days – we definitely wanted that bump in the bass for sure.

Your latest single ‘Messing With Fire’ gives us serious summer vibes, although lyrically it seems pretty deep. What was the inspiration behind the song?

There are bands like The 1975 who always write songs with such beautiful feeling chords and melodies but to contrast it all, the lyrics are sometimes very dark feeling or opposite of how the song makes you feeling just based on the instrumentation. That’s for sure what we were going for on this record. The main theme behind the song is the concept of conflicting emotions and thoughts in your head. I am pretty sure these days everyone has gone through moments just like that. In relationships, it’s sometimes hard to fully get a grip on what your partner is feeling and vice versa. It can create either self-doubt, confusion, or lack of trust. If you pick at it too much it can really break through vulnerability. That is the “messing with fire” in a relationship.

You seem to have a fearless approach to song writing, with this song talking about emotionally tough moments and being vulnerable, how natural does this come to you?

When we write songs, we don’t really like to think about it too much. I feel like whenever we feel something on our chest, we just say it exactly how it’s being played in our heads. Honest and transparent lyrics are so important, and a lot of times people shift away from it because it may be “too real”. I feel like songs like that need to come back. You hear it so much in the John Mayer records. He’s definitely one of the best at writing songs about true moments and true emotions that actually can be relatable to almost everyone on earth. Song writing is meant to feel natural and never forced.

The accompanying music video has a retro feel to it, how was the creative process and was this intentional?

We literally just set up shop in Dylan’s garage. Bought like $100 worth of blank photo paper, a cheap projector, some props from home, and did our best to make it look somewhat like a professional studio haha. We didn’t really want the video to feel like it was a high budget production at all. We wanted people to get that feeling that we just kind of just turned a camera on and filmed something in one take. The retro feel definitely is highlighted through the VHS stuff. We had like multiple cameras rolling at different angles, but the majority of the shots in the video came from this old VHS Camera. The video was very intentional in terms of how we wanted it to look, and we’re so proud of how it all turned out in the end.

What creative challenges did the pandemic put in front of you and how did you deal with them?

There was a period of time where we didn’t see each other for like 6 months. We had to naturally adapt to a new workflow where we’d send ideas and bounce sessions back and forth via email. All the old Motel 7 stuff was written together in one room, so it was definitely a new adjustment in terms of the creative process for us. Despite that challenge, it almost made us write better lyrics in our verses. I guess it can be tough to get super vulnerable and honest with song writing when you’re in a room with someone, but all that time in the pandemic being alone at home and in a way feeling isolated from social life and being with others, definitely sparked a more intimate and real approach to our song writing.

What message are you hoping to portray to your listeners as your profile continues to grow with each release?

Ever since the beginning we always joked about how Motel 7 started out as this tiny idea that we created by accident one night, and now I guess we are taking things more seriously so it’s been an interesting adjustment since then. But we never want to lose that feeling, at heart we always want the music to feel like it is still coming from that night that we first we wrote our first song for fun. No matter how far we go and how big things get, we want it to feel genuine and authentic. We want our fans to be a part of the music as much as we are. Motel 7 is a creative outlet and space that we want everyone to feel a part of.

What do you guys have planned for the rest of 2021?

We’re definitely going to start brainstorming how we want the live show to feel. Like we are so excited to roll out this batch of music so we can start playing it out live. That’s definitely something we have never done before, and it’s a bit nerve racking but also very exciting. I feel like songs feel so good when it’s played live, it almost feels entirely different. But meanwhile in addition to that, we are just going to keep on writing new music. Our goal is to always grow and expand our boundaries in terms of creativity, and never make the same song or album twice. We always want the next one to feel “new”. We’re so excited for all that’s to come for the rest of this year, and all the years to follow.