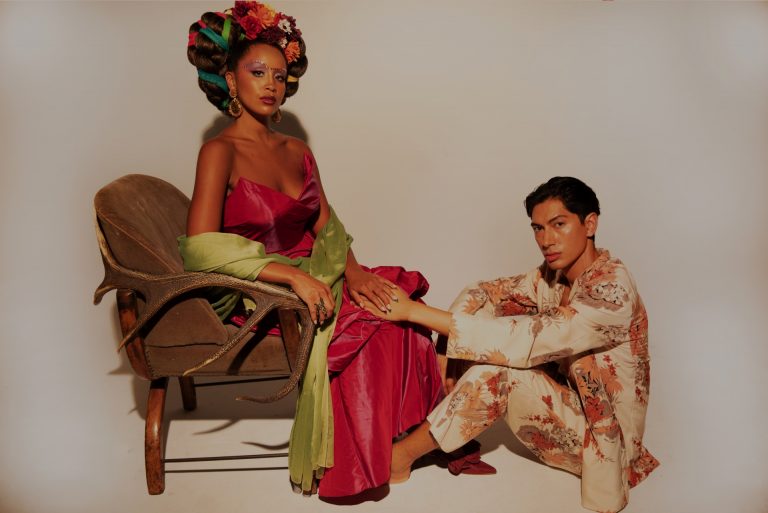 In Conversation With LION BABE

The forthcoming album ‘Rainbow Child’ by New York-bred duo LION BABE will serve as a reminder “never to lose sight of your inner light no matter how tumultuous the storm may be”.

LION BABE is an alt-R&B/pop duo comprised of multidisciplinary artist Jillian Hervey and producer/DJ Lucas Goodman, also known as Astro Raw. Ever since their first project, ‘Begin’ released in 2016, they’ve seen a gradual rise and reveal that ‘Rainbow Child’ is a more concise body of work as a whole.

The majority of ‘Rainbow Child’ was created during the pandemic, and speaking on their previous single ‘Frida Kahlo,’ due to the extra time, Jillian found herself revising a lot of artists’ work that reminded her of why she creates in the first place.

Released on August 6th, ‘Rainbow Child’ also includes singles like ‘Signs’ featuring the exciting Ethiopian-raised and Brooklyn-based music artist Siimbiie Lakew and the most recent release ‘Get Up’ with Trinidad James with new accompanying visuals.

Before we talked about their new project, Jillian and Lucas talk about their first meet-up and how things progressed from there, visual inspirations, and astrology.

How are you both doing?

J+L: We are very well and busy, busy, busy. Blessed that things have picked up for us, a lot of big things on the horizon. Gearing up to release our new album, so it’s really just been about completing everything we have been working on over the past year and change.

J+L: We are based in NY, between the East Village in Manhattan and Brooklyn. We usually travel a lot more, but really have been in New York for the majority of our time since the pandemic hit.

How did you guys first meet?

J: Have no idea how this much time has already passed, but we met 10+ years ago at a party in Boston where Lucas aka Astro Raw went to school. Our meeting was brief, but somehow music was part of the conversation. I was checking out colleges, and wound up at this solo cup filled, brofest with a family friend. Thankfully the music saved my boredom at the party and it turned out it was one of Lucas’ songs. I just walked up to him and said “Hi I’m Jill. I like your music.”

We didn’t reconnect again until a few years later, back in New York through my same friend. He was still making beats and I was dancing at the New School. I ended up reaching out to him to see if we would be into helping score the dance piece I was choreographing for school. He agreed and that ended up being our first collaboration and started our relationship that would evolve into LION BABE.

How and when did you decide to become LION BABE?

J: We would hang out, and I would go over to listen to his beats and hang with the other rapper/friends there and we casually started to talk about making a song/music. I was becoming more confident as an artist, and I wanted to branch out and try writing songs. Like I mentioned before, I liked his sound and thought it could be a cool way to get started. The first song we wrote was “Treat Me Like Fire” and after that we felt we had something fire, so we attempted to fill in the blanks needed to release the song, which at the time we’re having a band name, creating a Soundcloud, Bandcamp, Facebook and Twitter page! The rest is history.

Why did you call yourselves LION BABE?

J: It pretty much came together after I learned Astro was a Leo in Astrology. I was super into lions after a safari in Africa changed my life, and I am also a Leo rising, so the lion part was in the mix from the jump. We ended up with LION BABE because we wanted something ambiguous, we liked how Blondie was both Debbie Harry and the band as a whole. My astrological sign is Gemini so the babe represents the duality of the name. In short, it means strength through vulnerability.

How did you individually get into music?

L: I started playing guitar when I was 12 and from there started to gain interest in production and beats. A lot of my friends growing up played music, so we would all play together. My family loves music as well so I was encouraged.

J: My family is filled with creatives so music was introduced to me at a very early age. Both of my Grandparents on my mothers side were music teachers and a family requirement was that I had to be in band and chorus during all of grade school. So I had a wide range of styles around me all my life.  My grandpa taught me to play trumpet and I sang in an acapella group in high school. My Dad is also a PR veteran and manager who worked with icons like Babyface, Rick James, and my mother of course to name a few, so he introduced me to a lot of the soul music that I adore to this day. Dance was my true passion though and once I became a dancer, I had more bravery to sing and write. I always knew that if I was going to be a singer, I would want to write my own music.

How did living in New York influence your sound, visual and general artistery?

J+ L: New York is always buzzing and is filled with so many different cultures, energies and moods which has always complimented our aesthetic, lifestyle and inspiration. We are both eclectic and passionate so it all just feeds into each other. It is also home, so the chaos is somehow comforting and the city allows us to escape through the music.

What is your favourite thing about New York?

J: When people think about New York they mostly assume it’s just the city but my favorite thing about NY is how vastly multidimensional it is. We have the greatest city in the world here filled with culture and amazing food, but also beautiful mountains in the Catskills, dreamy beaches in the Hamptons and lush woods filled with animals in Westchester and upstate NY. You really get a little bit of everything here.

Where did you take your inspiration from for your visuals?

J: It mainly starts from whatever the song makes us feel while we are writing it. I will usually see something in my head and then we’ll look everywhere for images, movies, nature, old records, and photography and pure living life to compile it all into one place.

How would you compare your older projects with ‘Rainbow Child’, what’s changed?

L: Having grown even more as musicians and people, this is definitely a project that has more of a distinct sound. It still taps into sounds that we have always been interested in but as a whole it is more concise.

What is the backstory to your song ‘Signs’ featuring Siimibiie Lakew?

J: ’Signs’ came together in the studio when Siimbiie stopped by for a session. Lucas was playing guitar and we started to build it all after that. Siimbiie took the lead and I just followed along, and started writing from there. It was all very organic and ironically Siimbiie and I are both Gemini suns, Leo rising and Capricorn moons so the collab was obviously meant to be.

How did the concept for ‘Frida Kahlo’ come about? Why Frida Kahlo?

J: Frida has always been a muse and inspiration of mine. We wrote the majority of this album during the pandemic and at that time I found myself revisiting a lot of artists’ work that reminded me of why I create in the first place. Frida is special though because her work is so introspective. I think all of us were rediscovering ourselves during 2020 and having never really tied any of my inspirations directly into our music, I thought her work, legacy and message was very timely and needed in the world at large.

What can you share about your upcoming album ‘Rainbow Child’? What can we expect?

We are really proud of this album and will always remember how we felt emotionally creating it. We got to collaborate with so many creatives, visual artists, musicians and friends who represent the people and art we are inspired by. It is a reminder to never lose sight of your inner light no matter how tumultuous the storm may be. What makes life and each of us beautiful and powerful is everything we experience, the good, the bad, the ugly, the sacred and the unseen. Only all colors together make a rainbow. Expect more magic, love and classics baby!