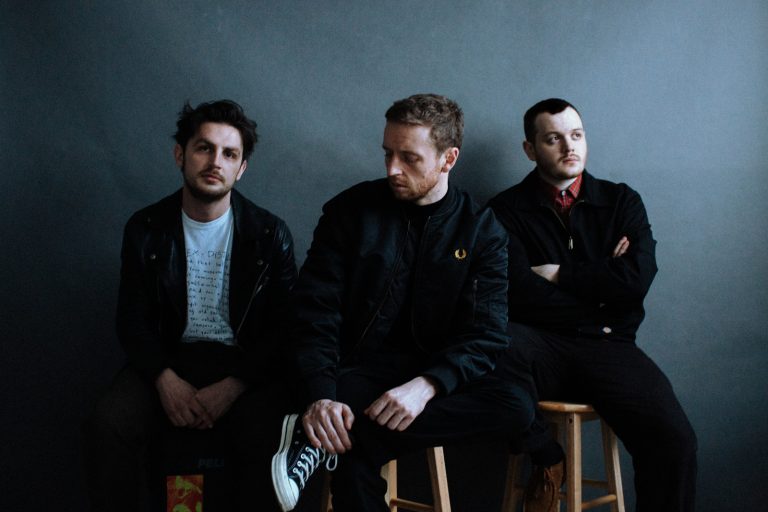 With its combination of timeless songwriting, wholehearted emotion and fervent soul, newfamiliar established their huge potential with their debut track ‘How Can I?’. It accelerated to #1 on iTunes’ singer-songwriter chart and earned its first airplay via BBC Music Introducing. Building on that stellar introduction, newfamiliar today share their follow-up ‘Here For You’.

Originally from Belfast, vocalist Ryan Johnston met his bandmates Will Booth and Danny Hepworth through Wakefield’s creative scene. They have collaborated together in various projects, with newfamiliar representing the realisation of their collective potential.

The latest offering from this creative collective, ‘Here For You’, puts a fresh stance on the compassionate stance that newfamiliar explored with their debut track. It’s a straightforward message that while what has broken can’t be fixed, there’s someone on call to help you weather the storm.

Speaking about the song, Ryan explains: “‘Here For You’ is about empathy, it’s about simply being a shoulder to cry on when that is all someone needs in that moment. No words of advice, no explanations of how you came through something yourself,  just listening and being there when someone truly needs you.”

Last month, while anticipating the release of ‘Here For You’, we spoke to vocalist Ryan about the bands debut on Radio 1’s Big Weekend, and creative process while exploring their innermost feelings about deeply personal topics such as loss. Read on for a fascinating insight into newfamiliar and stream their new single ‘Here For You’ below.

Hey Ryan, Will and Danny, how are you doing? How’s 2021 been treating you so far?

Ryan: Hi we are doing great thank you and 2021 has been ok so far, just happy to have some news music out and more on it’s way

So let’s go back to the beginning, what would you say was the point where you realised you wanted to pursue a career in music?

“How Can I” is such a heartfelt and personal song, was it inspired by something either of you personally went through?

We were all losing someone in each of our individual family circles at the time. It was a very emotional song to write and in a way it’s almost an anticipation of how we and those around us would feel once our loved ones had passed away.

Take us through the process of creating that track, is it something that evolved over a long time or was it written in a studio session?

It was first started in Wills back room while he was at work. Danny and I were writing with a friend of ours Alfie Jackson. We wrote most of it in a few hours but didn’t and just recorded a few voice memos of the idea. A few months later we were offered to stay in a boathouse on a really picturesque Loch in Scotland. We took some really basic recording equipment and wrote a few songs there. One afternoon we decided to finish writing ‘How Can I?’ and we recorded a really low Fi DIY version that heavily informed the sonic of the final production of this song and it’s now become a staple in our sound.

Working with Rich has been a total godsend! We have worked with many well known and successful producers but it’s not a one shoe fits all kind of thing, you really have to find someone that brings out the best in you and someone you naturally gel with. Rich has brought so much to our recorded sound and he was a total pleasure to work with.

You’ve been compared to some really timeless acts like Dermot Kennedy and Paolo Nutini, what do you think about those comparisons? Do you listen to those artists?

We can hear a bit of similarity in terms of song writing, lyricism and accent and we have a lot of respect for both of them. Paolo’s ‘Causitc Love’ Album was heavy on all of our playlists at one stage.

What other artists inspire you right now?

Moving on to the visuals for “How Can I?”, what led you all to making an animation video over something with you featuring in it?

For a long time now we have been fans of an Illustrator called Bel Mehta and her work has really influenced the aesthetic of the band and this particular time in our music. We wanted to carry that vibe into a video as we felt it could add a new layer to the song in an emotive way.

BloodBros is an incredible animator, did you consider many artists or did you want to go straight for BloodBros because of their signature style?

Working with BloodBros actually happened because an old friend of ours had started working in this area of the industry and he put BloodBros forward. His work just matched our vision for the song perfectly.

Debuting on Radio 1’s Big Weekend last year must have felt amazing even during lockdown, how did that opportunity come about?

Honestly it was the highlight of last year! We have been active in the West Yorkshire music scene for many years now, Emily Pilbeam and Shell Zenner have been great supporters of what we do at BBC Introducing West Yorkshire and they kindly put us forward.

Can we expect a full length project this year? Or is it too soon to ask!

We will be following up very soon and hope to have a full EP out by the end of April.