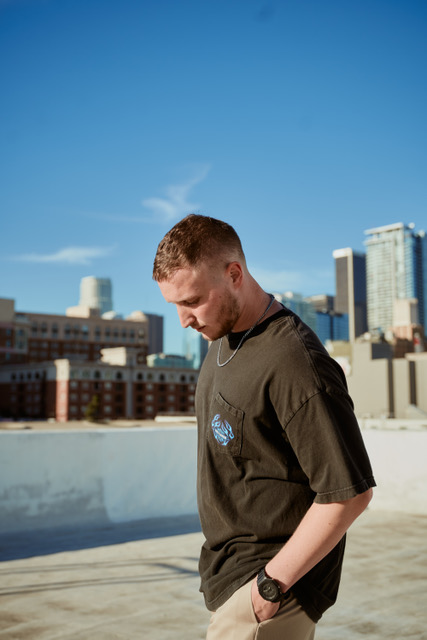 Next Up: Ty Brasel

Hailing from a writing retreat, Nashville-based rapper Ty Brasel is tunnel vision focused on creating new music since his empowering album ‘Destiny: Vol. 1’. Brasel feels a responsibility to encourage people to pick themselves up as someone who’s not scared to look into the eyes of darkness.

“I think I’ll just take it a day at a time this go around,” Brasel admits. New Year’s resolutions never really worked for him anyway. With a history of choosing the wrong paths, Brasel carries a sense of community as he’s seen it all. For the upcoming year, he manifests the following: “Hopefully positive feelings and inspirational thoughts and ideas for my generation and the one after me.”

It’s always fascinating to see who or what is the reason for someone’s career. For Ty Brasel, it was 50 Cent and Eminem. “When I was a young boy, it lit a fire in me that made me want to do what they did.” However, he keeps getting inspired by the legends as well as newcomers:’ “Definitely, Kendrick, Kanye & Drake were the most influential, as well as Curren$y & Big KRIT. But I’ve been influenced by so many artists and from so many different styles; it’s crazy. I think more recently, I’ve gotten a lot of inspiration from Post Malone, Travis Scott, & Don Toliver”.

What you will take away from the Ty Brasel discography is his ability to be vulnerable and showcase a broad spectrum of covered themes beyond the usual superficial topics of money, women, success. At the end of the day, he aspires to use his passion for rap music with the best intent possible: “I think it is the most expressive art form in the world, and it’s also the coolest, in my opinion. I just always gravitated towards it and felt moved by it and connected strongly with the art form and the culture”, he explains.

Ty Brasel has experienced rock bottom throughout his life due to his struggle with addiction. Getting out on the other side, he shows gratitude for people around him: “I realized more than ever when I was at my lowest moments that we need each other to survive.” Feeling appreciative of his closest circle, he wants to do the same for other people who may be at their lowest.

He dedicated his songwriting to portray a traverse through his personal life, hardships, and victories on his previous albums ‘Young T’ and ‘The Divine Storm.’ “I write my music from a real place of where I am in my life at that point in time. So I think people really get to walk through life with me as I’m figuring it out myself, and they get to experience the growth musically because I’m always trying to experiment and explore with new sounds and ideas.”

‘Destiny: Vol. 1’ embodies the next chapter of Brasel’s journey, where he aims to inspire people to chase their dreams. “I think I didn’t take myself so seriously. I just had a lot of fun creating it. It’s also definitely the most commercial music I’ve ever made. I tried to be intentional about making music that feels good & that could reach the widest audience possible”.

He elaborates on the backstory of ‘Destiny: Vol. 1’ and what he wants it to represent: “I wanted to use my story as inspiration to other people to chase their dreams and find their purpose in life. I wanted to show people that it’s possible to persevere through the hard times in life and do great things”.

He turns to his songs like ‘Right My Wrongs’ and ‘All I Got’ for a pick-me-up whenever he feels down. Acknowledging the power of his own lyrics, Ty Brasel is often a source of hope for many: “That’s actually my favorite part about what I do. I’ve heard some incredible stories of the way my music has impacted and changed people’s lives or ways of thinking, and that’s a blessing to me. I really think that’s the reason I can stay so passionate about my music even when it gets hard”.

Brasel’s career is picking up, and he never stops aspiring for greatness. One of his dreams is a collaboration with Kanye West: “I feel like we’re on the same wave and we could make some great art together. From a production standpoint, probably Pharrell or Metro Boomin”.

Even though the release of Ty Brasel’s most recent album, ‘Destiny: Vol. 1’ was only a couple of months ago, he already has different projects in the works. He is staying busy, so strap in for what’s to come for the rising rap superstar and lyrical genius.