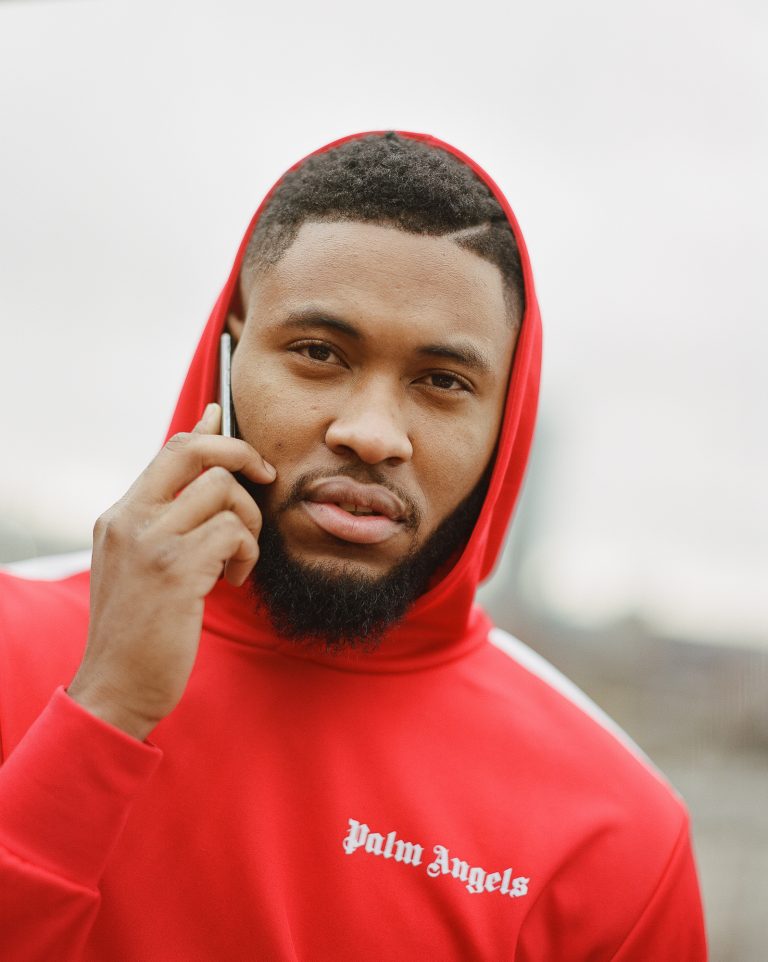 “I always knew that I would make it, the only surprise was the timing”. We’re sitting at the bar of Radio Rooftop London on an early Saturday morning and Osh is being set up for the 4th set of his photoshoot with photographer Nahwand Jaff. We are discussing his love for constructive criticism and how it pushes him to do better whilst showing no concern over internet trolls who in his words are “just idiots because they could never say any of that stuff to my face”.

Osh attracted overnight fame at the end of 2018 after he posted a barely 60 second video of his self, bolting out his remix to Burna Boy’s ‘Ye’. It was shared, sang over and meme’d so many times to the point of going completely viral the next day.

Undoubtedly talented with a soulful voice and skilled in playing the piano and violin-Osh’s passion for music goes deeper than what some may argue to be a social media fad. Now signed with Colombia records, he has already worked with Idris Elba and performed live on the London Eye with BBC 1 Extra. With his drive, talent, passion and charm, it’s evident that the 23-year-old Croydon native has a lot more in the pipeline to share with the world.

Osh is much taller than I had expected. We first met back in January during London Fashion Week Men’s in between shows at The Truman Brewery. Having seen his face so many times across my social channels, it was very easy to instantly spot him among the fashionable crowd and our short conversation with me fan -girling a little bit (I remember telling him that he’s amazing) led us to arranging this interview just over a month later. Obviously withholding an interest in fashion, I had to ash him to describe HIS ye’ “My ye’ is different haha. Ermm how would I describe it? It’s the next line init, I’m always just dripping in sauce. Saucy in terms of how I dress, how I conduct myself, my personality. I don’t try to be fair, I just think I walk in to a room and my aim is to own it.” He also shares that he would love to one-day feature on a Louis Vuitton campaign “I love a bit of Louis Vuitton. Virgil- he’s inspiring! He’s very inspiring. DJ plus designer…”

I instinctively chose Radio Bar as the ideal location for the photo-shoot to highlight Osh’s accomplishments. The 360-degree view of London is none other than jaw dropping whilst putting into perspective the endless possibilities of what’s ahead of him. The eclectic, crisp interior also smoothly mimics his ye ;). Dressed in slides and socks with a stiff, casted left hand and right hand holding a freshly ironed outfit, he greets us and tells a glorified story of him protecting an elderly woman from being attacked by a dog to mask his recent football injury. Whilst surprised that he still has time to enjoy the sport he loves, more of his team arrive carrying more bags of clothing whilst discussing their busy schedule for their long night ahead of more gigs appearances.

His team on the day included his manager, stylist, designated driver and nephew – just a few of the people he recalls as being on ‘This Side’ which I can hold my head high up to proudly be apart of. “One thing I live by is loyalty. I’m a big fan of it and I’m very loyal to my own, will always try to protect my own for an example when I say ‘this side’, this side means anyone that supports what we’re doing so you’re part of the family, like you’re apart of the family for an example. We met, I liked your vibe, you set up everything and were here doing this so yeah I try to be loyal and I try to give back to people who give to me”.

Osh’s chilled demeanor is further reflected in his laid back approach to making music. “My process is quite different. I’m not at the stage yet where I can just sit down and write. I need to just be chilling as most of my lyrics I come up with when I’m getting ready, in the shower, sometimes ill be driving and ill have the instrumental on loop and be singing over and over until I remember it. I have to be in my comfort

zone.” I would argue that you can tell a lot about an artist according to their aspirations so it was only normal (yet slightly basic) to list the names of those that he would love to collaborate with “I believe I’m able to do different genres so some people may say I’m crazy but I would love to sing with Adele one day and for personal reasons I would love to do a song with Stormzy. I knew him before and his journey has inspired me quite a lot so it would mean a lot to me to do a collaboration with him. Drake, J Cole, Beyoncé, I’m a big fan of Alicia Keys, Kirk Franklin so many…

He is modest yet confident at the same time and from our conversation, certainly has a clear vision of his goals and where he aims to be. He shares that ‘My Ye’ “kicked down the door and the next single will let everyone know that [I’m] here to stay…there is a lot on the way”. Having only committed to music seriously a year ago whilst at university, it’s no surprise that Osh’s entitled industry critics have a lot to say. I went snooping for more of his work and was enthralled by the way he skillfully experiments with various genres. His style is the outcome of his love for gospel music aswell as a few obvious icons such as “Kirk Franklin, Michael Jackson, Drake, Biggie… there are so many influencers to list but I would say genre wise- gospel, hip hop and R&B. I was at university when I said that I want to take my music seriously so a lot of the UK artists today in terms of the graft and accomplishments so I’ve been influenced in different ways”.

Though I could not pin it down at the time, Osh’s energy reminds me of the panel discussion Stormzy hosted for his book launch in October 2018 whom also made a huge statement in saying “I always knew that I would make it”. There must be something in the air in South London to be producing so much drive and talent which makes me excited to see what new work Osh will be releasing over the coming months.