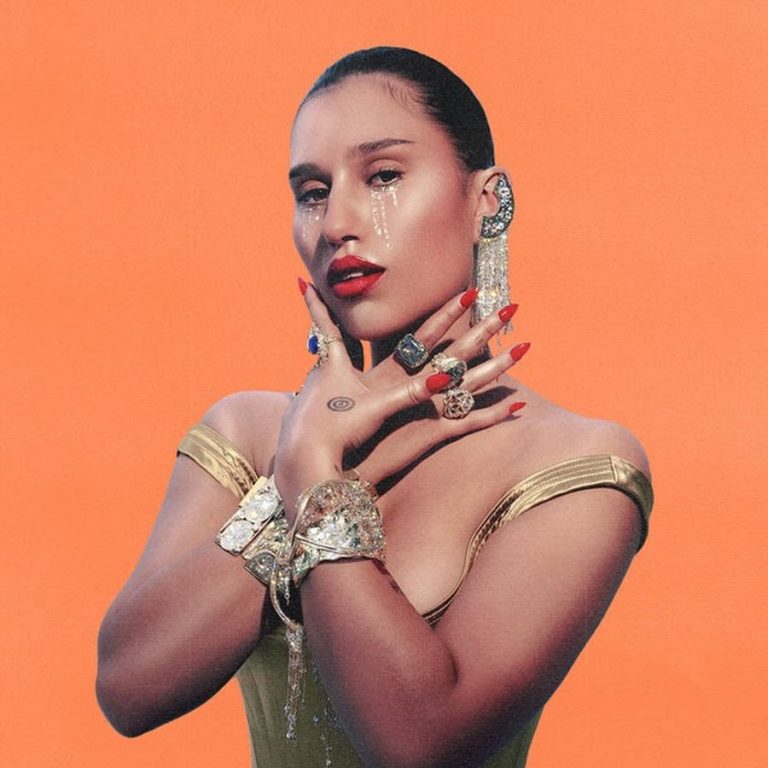 We sat down with the songwriting juggernaut where she talks contributing to Rihanna’s new album, identity struggles, and finding her sound by ‘going through it’.

Sylvia Plath once famously wrote “August rain: the best of the summer gone, and the new fall not yet born. The odd uneven time.” We’re in that strange place right now, but I love in-between spaces. In the spirit of all that lushness, I have a few things in bloom “.– and within that, this is perhaps the place where RAYE is currently sat in. Waiting pretty in white accompanied by a bold red lipstick, she matches the dining room setting like a chameleon changing colours to adapt to its surroundings but never truly blending in, without fully making it home. Diffused and a bit of everywhere without belonging to one particular place.

Immediately she is earnest, warm, honest and does so without being self-deprecating, a friend you could call up at whatever hour when you’ve done something stupid, again. Which in her case, actually happened amongst the rendezvouses; arriving fresh from filming for her newest single Love Me Again and The Lion King premiere the night before where she was notified by Beyonce that a song of hers had not only made the cut for her new album, but was made to be the opening track. That may sound like a mouthful, imagine living it and what’s most intimidating about all of this, is that she’s only just taking flight.

Reigning from South London, RAYE always knew that she wanted to become an artist. Planning a bucket list of accomplishments since the age of 10, eventually going to Brit school then leaving at 16, later going to sign her first publishing deal a year on through showcasing over 100 acoustic songs that she had created and produced. It wasn’t long until she landed her first cut for All Cried Out for Blonde which soared up to number three in the UK charts standing as proof that her songwriting credentials stem from many years back. “I remember thinking, ‘Oh my god, this is so cool’, and so I wanted to be known as a writer as well as an artist, you know? It’s just something that I’m so passionate about, I just love writing. It’s my outlet and I’m also not necessarily always writing RAYE songs, and so this enabled me to write any sort of song for anybody”. It has been all uphill for RAYE since then, though she claimed it wasn’t an easy journey to get to where she is as an artist, telling me “I have literally given every single ounce of myself to this job, and I still have so far to go. Achieving incredible things as a songwriter is great but I’m an artist as well as a writer and that’s really important to me. It is…a hustle! I’ll tell you that. You have to find your way into the rooms”.

With her discography including co-writes for artists from John Legend, Charli XCX and Khalid, to Little Mix and Ellie Goulding, and through this she has managed to garner a total of over a billion streams. Yes, You read that correctly. Just over 1 billion global streams alongside multiple platinum discs. At 21, most of us would be glad to be balancing a degree and not being too deep into our overdraft, however it’s worked a little differently for RAYE, who can now add Beyonce and Rihanna to her list, “I’ve written songs in contention. There is no artist who more songs that I’ve written for. I’m so excited for who my music might uplift and support, I just want it to help people. That’s what Beyonce’s music does, it makes them feel incredible”.

When I asked her how she achieved this at such a young age, being intimidated by the fact that our birthdays are only a few months apart, she answered, “Sometimes my manager will go to a few meetings and play some songs and people will decide whether they want it for a certain artist. Other times, I’ll send directly to an artist that I’ve formed a relationship with, like me and Normani are proper tight and we’re always going back and forth on ideas. And sometimes you get invited to a session with the artist to create something with them, which I think is when I have the highest success rate because I’m actually with the artist. I’m such a people person and I love to get to know you and talk so that we can write the truest and most honest piece of music that we can”.

Yet, despite all her triumphed collaborations and diverse discography, RAYE claims that her proudest song to date is her newly released Love Me Again a heartbreak anthem that came out at the beginning of August. “It’s a tough one to release because you have so many opinions and people to keep happy when you’re on a label. I fought for this song, it’s a very vulnerable song as well. I’m really going through it right now”. The song is described to be ‘an ode to winning back a lost love’, an electro pop infused single accompanied by visuals that show exhibit RAYE at her most vulnerable “Sometimes I want to say ‘Shut up and let me be an artist!’ to the labels critiquing but I also understand because winners listen and take in those opinions, consider them and then choose where they want to apply it. Only idiots think that they know best, because I don’t”.

With mercury retrograde coming to a close, RAYE is entering a new phase in her life and career both literally and spiritually. Growing up with Ghanian, British and Swedish family members, she not only had a difficult time establishing herself as an artist, but also an individual, facing a continuous battle with how to present herself, “I had a hard time in primary school, there was literally no black people in my classes. None of the boys fancied me, I had a really hard time. I used to always be sad about not having blonde hair and blue eyes, and obviously the first moment I could, I dyed my hair blonde as soon as I was allowed to, you know? You see how emotionally scarring this like that do come around. I was trying so hard”.

Within mixed communities, identity struggles are a pretty standard issue. However, RAYE relishes in the fact that it helped her explore different genres of music. As she explains her musical upbringing, I can’t help but notice the three tattoos on her arm, which involve all of the flags of where her family is from, which are also on her Instagram bio, a proud nod to her cultural heritage, “I had to question why I was doing everything. I realised that I’m so scared sometimes to just be who I am. The problem is, I am white, and I am black, and I am a combination of all those things. Does that make sense? And depending on the environment that you’re in, you’re torn and stuck between which identity you’re supposed to be by the day”. She continues, ”I do really struggle with that and I think that a lot of black and mixed artists feel the same. It’s important to talk about and that’s the thing, no one does talk about it so then we deal with it on our own and that’s when it gets worse. Do you ever find that whenever you try to explain it to someone that isn’t mixed how you feel and they just look at you funny? Not to be rude or whatever, but I’m trying to tell these white men how I feel, but sometimes I get ridiculed and dismissed or being told that I’m overreacting. It’s really, really difficult. It gets tough, my label have been very supportive but it’s hard to get across and explain that I don’t want to ‘whiten’ myself to the point where I’m not me anymore. I always thought that in order to win that I was going to need to compromise on this and that, which you do. You need to, it’s essential. But, it began to get to the point where I was compromising my culture, and who I was”.

Though a lot is currently going on for her, RAYE still feels like she has a lot left to explore and create. As we conclude the interview, she is preparing for her flight to Ibiza to further collaborate with new friend David Guetta, and further produce content that feels more real to her, like she’s coming back to herself. “I’m just not trying to be someone that I’m not, anymore. Before I was always thinking about how I can be a pop star and how to make my label happy, but those aren’t the things that I should be focusing on. It’s now like, do I like my music? Am I happy with how I’m being presented to the world? Am I confident? Does it reflect who I am? I’m proud of myself as a person, I’ve got nothing to hide or be ashamed of. I can acknowledge that I was trying to be someone else, and I feel a lot more of a woman now than ever. I started releasing music at 17 and a lot has changed since then. I’ve grown into that, I’ve found my feet”. `