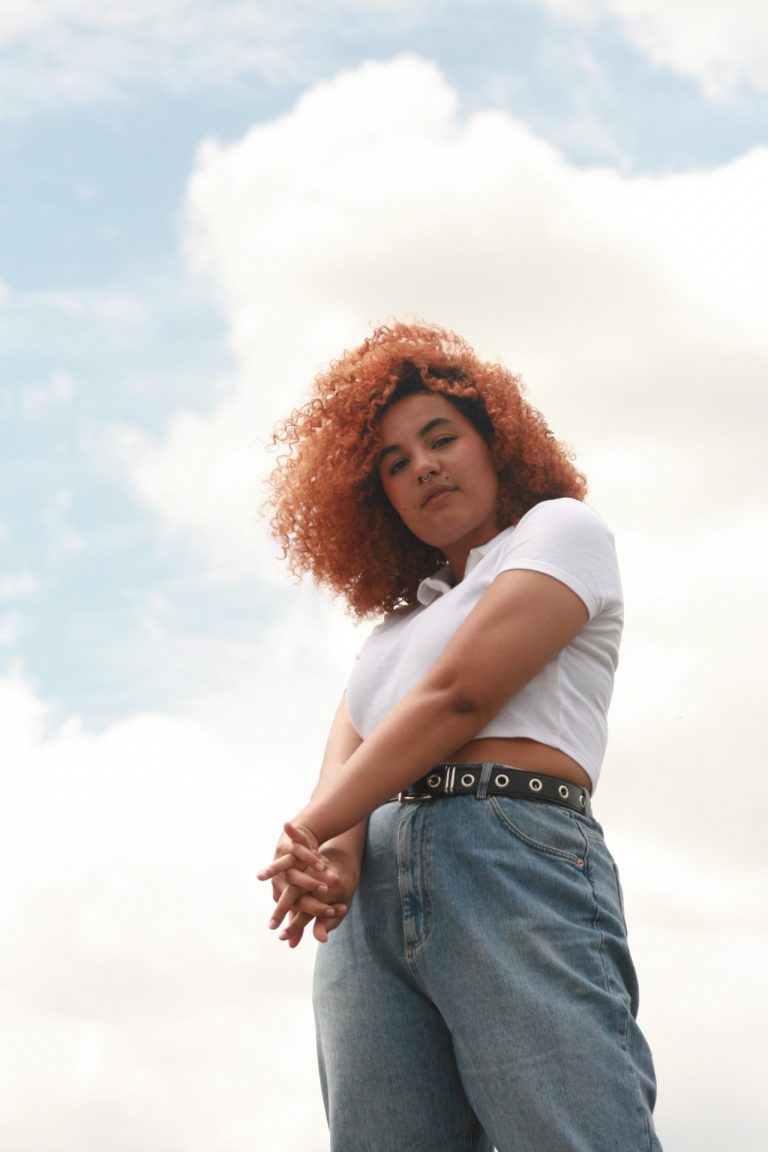 On The Rise: Ruti

In the year that changed the world that was hell-bent on pushing us all back, Ruti charged forward. With her silky smooth vocals, cheerful and chilled tone and a vibe that lifts the spirits, you can see why she’s caught the attention from legends such as Sir Tom Jones, describing her and her win on The Voice UK as ‘a breath of fresh air’. Agreeably, she’s minty fresh, optimistic for the future, and ready to serve us the summer nights freedom feeling that we all crave this year, turning our heads towards a hopefully more colourful 2021. On a grey rainy afternoon spending some time with Ruti on a zoom call, it was safe to say she was the sunshine needed to brighten the room.

Hey, Ruti! How do you feel 2020 went for you? How has the creative process been during Covid?

2020 was difficult, for everyone of course, so I definitely feel I’m not alone in that. It was a mixture of relaxed and anxiety inducing, being worried a lot. But career wise, obviously I didn’t get to gig, I didn’t really get to release the amount of music I wanted to. But at the beginning of 2020, I actually did get to do a huge gig with a company called Young Voices. It was a huge tour, something I’ve never done before which was so exciting! But straight after, we fell into lockdown. So a mixture of highs and lows defined 2020 for me. But creative wise I have had the opportunity and time to work, and I did spend some time in studios when the restrictions eased a little. I had a big realisation that normality was going to be a while away, so I had to change my outlook to work around that for sure. I allowed myself a bit of grace, and put my wellness at the forefront.

You’re a born and bred Essex girl with a Nigerian heritage, do you think the infusion of that ultimately became reflected in your music style?

Ooh, that’s a good question! I’m not from a big musical background growing up, but I remember listening to music on MTV Saturday mornings with my mum and dad, so it grew to be a passion slowly but surely. Now I’m older, I’ve started listening to the big Nigerian artists like Fela Kuti, because my dad loves him! Bobby Benson too. But most of my music inspiration actually came from the vibes of my school friends, so it has many British culture influences. In fact the Essex area I grew up in wasn’t overly diverse, which was a little anxiety inducting and isolating sometimes too, so all these things influenced the music I make today. But I want to explore my heritage further though, and my dad is a great teacher of that. It’s definitely more recently that I have embraced both sides of my cultures, and I hope to continue that.

Who would you pin- point as your main influencers in music? Who do you look up to?

Oh gosh! Um, I always struggle with this question! Haha.

I think when I first discovered my voice and began to sing, I was an Adele girl through and through. I was in year 7, everyone in the talent show sang an Adele song, including myself of course. So Adele was a big influence. And actually, Rebecca Ferguson who was on The X Factor, I really loved her voice. It was different to any other voice I’d heard before. So those strong, female voices are the big sources of inspiration for me. But also, moving on to listening to artists like Laura Mvula, Lianne La Havis- seeing black women play and compose and sing in front of thousands of people, it’s helped pave the way for me.

What ultimately was the turning point for you in your life, making you want to start a career in music?

I wouldn’t say there was a specific turning point looking back, I slowly got involved with music more and more through school, into sixth- form taking it as A Level. Before music though, I was a young dancer, specifically ballet and musical theatre, but joining show choir at high school steered me to change direction. I learned to play guitar, became interested in music technology and production, so yeah. It was a gradual process, I think! I actually thought about perusing the music tech side of things into university, but I ultimately ended up not going, but where I am now- no regrets!

Who would be your dream collaboration? I would die to see you on a track with someone Ari Lennox, ENNY, Hope Tala, that kind of vibe!

My track ‘Closer To You’ that I released last year caught the attention of Tyler, The Creator, and ever since then I’ve been like ‘oh my god, could you imagine if…’ I could even be a sample on a track with him, I don’t care! I just feel like that would be so fun.  So at the moment, working with Tyler, The Creator would be the big dream right now.

Tell us about your experience on the Voice, do you feel like such success on such a commercial show sparked a different independent path for you?

I always knew I wanted to be an independent artist, and The Voice was a stepping-stone to get experience. It wasn’t a planned path, but I loved my time on it. It was so unique and so fun, and I’m really glad I did it! I didn’t go in with any expectations, I didn’t even think a chair would turn for me. I keep saying I did it for LOLs, but in a way, it was a strategic move, working with a band, meeting and working with the coaches, etc. It’s a massive platform to be on, with lots of people watching, meaning that exposure is there.

Sir Tom Jones himself pressed the buzzer for you and described your voice as ‘a breath of fresh air’. How did this moment feel?

That moment actually still feels kind of blurry in my head. That was the moment I felt so nervous on the show, the blind auditions. I watched it back once, but only once because I can’t bare to watch back at myself! Ha-ha. It just feels so surreal, like it never happened but it did. It was such an honour for Tom to say that about my voice. He’s still very supportive of me! I’ve spoken to him quite a few more times on the phone than people might actually think. I’m so glad it was Tom that turned the chair, but they’re all such good coaches that I wouldn’t have been able to choose! But that turn changed my life.

What artists have saved you during this pandemic to keep you grooving, have you opted for classic bangers or new discoveries?

I’ve been listening a lot to Rina Sawayama, because she brought out an album last year called ‘Saywayama’, and that’s kind of saved me, like, I’ve listened to that so much. But I do get a lot of comfort from a lot of songs I already know, playlists that I’ve made and had for years, especially right now when my anxiety at its height feels calmer singing along to songs I already know the tune and words to. It releases stress. So a mixture of old and new depending on the mood!

What are you looking forward to the most once we get back to normal life, festivals with crowds, or jamming in studio sessions?

Performing live, without a doubt. I’ve been able to do a few jamming sessions throughout lockdown, but I just cannot wait to perform again. I still haven’t really done a headline gig yet since The Voice, and I’ve done some festivals, but I can’t wait to see the name ‘Ruti’ in a headline. I want to play live with a band again, in real life!! I’ve got new songs as well that I haven’t had a chance to play live yet, so I’m really ready to do that.

Let’s talk about your newest single ‘My Sunrise’! It feels so chilled, a summer sunset bop with some really smooth sweet vocals- a pick me up that everyone needs right now! What was the inspiration for this single?

I didn’t really write it for anyone in particular. It could be to my friends, it could be to myself, or in fact anyone who listens. I wanted to tell myself and everyone else listening that there’s a lot more time that you are giving yourself. We give ourselves such a tiny amount of time to do everything we want to do, the world always feels like it’s in such a rush. We’re allowed to enjoy ourselves too, we’re allowed to relax! In my head when writing it, I envisioned going away somewhere, like Europe, maybe Spain, Barcelona, being able to relax, have fun, party, talk until the sunrise. Sounds cheesy, but that’s what I was imagining. It’s pretty relevant now the meaning of this song, as lockdown is challenging us and we can allow ourselves that grace for relaxing, enjoying our own space and taking the pressure off ourselves a little.

I don’t know if you agree with this, but ‘My Sunrise’ sounds like the perfect song for a KAYTRANADA style remix, how would you feel if someone took that kind of project on with you in the future?

Yeah I would definitely be up for that. I love remixes because I love how other people might interpret my material, a mash-up of different ideas coming together. I would be so up for that, yeah! Anyone who wants to remix it, please do, I want to hear it!

2021 is looking like a bright year for you! What kind of new projects are you working on that you and hint at for us?

I’m releasing my second EP this year very soon, so I’m really excited to share that with the world. Both ‘My Sunrise’ and ‘Closer To You’ will feature, but with some new tracks of mine too. They’re all inspired by seasons, each one with a different seasonal feeling and vibe. A little undecided of the name yet, but it’s coming soon, and I can’t wait!

I’ve already started working on more songs too, whether that turns into another EP or my first full album is undecided yet, we may have to wait until next year for an album. But more material is on its way, I’m just focused on smaller projects at the moment.