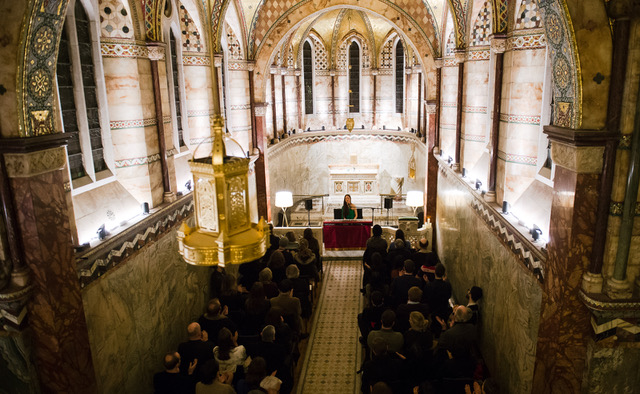 With its intricate stain glass windows and hazy golden walls, the Fitzrovia chapel in West London was the perfect location for the inaugural performance of some of the tracks from Sasha Siem’s forthcoming EP Holey Wholly Holy. Having studied music and poetry at Cambridge University and Harvard, there is no denying Siem’s academic prowess, and the nuance and intelligence of her musical catalogue acts as an illustration of what she learnt there.

Siem began her performance as she meant to go on with a spirited and enthralling rendition of her recently released single Eve Eyed, a powerful invocation for female empowerment. The track encourages us to challenge the Judeo-Christian notion that all women are inherently guilty for man’s original sin, and invites women around the globe to explore and dismantle this harmful gender ideology. The track’s powerful sentiment and Sasha’s captivating stage presence meant for a beguiling start to this unorthodox premiere.

Next came the albums title track, a song that reminds us that regardless of our race, gender, or religion, we are all people and should be respected as such. The track’s thoughtful sentiment encouraged the audience to think and challenge their preconceived biases or prejudices in order to create a kinder, gentler world. The acoustics of the space gave this single the commanding presence that it deserved, and the strength of Siem’s performance made for an intense listening experience.

The empowering Fiercely Fearless came next, followed by Come As The Sun, and the rousing Members Of The Dawn. The  performance ended with an enchanting cover of Your Song, a performance that showed Siem’s gentler, milder side.

Siem’s magnetic presence and thought provoking lyricism combined to create a truly unforgettable evening. With the rest of her album being released throughout this year, and the suggestion of more live dates in the not too distant future, I’m excited to see what this writer and musician gets up to next.