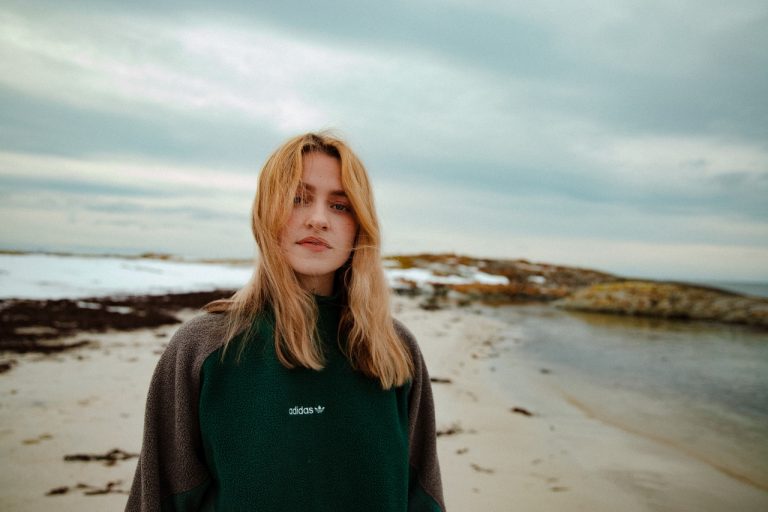 Shelving her microphone to help out as a health care worker, the Norweigen rising alt-pop artist SKAAR returns with delicate yet confident vocally charged album ‘Waiting’. After last year’s ordeals, SKAAR is more certain than ever; she is meant to write songs and perform.

‘Waiting’ features the compelling ‘Say Something Now’ and other tracks like ‘Time’ and ‘You’ featuring Emelie Hollow. SKAAR is getting the respect she deserves with Best Pop Artist and Best New Artist nominations at Spellemannprisen (the Norweigen Grammy Awards). Noctis talks to the songstress in an interview below.

Hey SKAAR, what have you been up to lately?

These days I’ve been trying to relax and just catch my breath! Been a tiny bit stressed out in 2021 because of fun things like my album hihi, but it was nice to take a couple of days to calm down a bit.

How did you discover your voice and your passion for songwriting?

I wish I had a better answer, but I really don’t know! I just remember always having a passion for music (which came out of nowhere), and ever since kindergarten I’ve always wanted to be an artist. I guess it just developed from there! Haha funny thing

Were you surrounded by music when growing up?

Not really! My parents met each other in a choir when they were young but that’s about it….

I remember always singing, wherever I went. It all kind of escalated though when my brother showed me how to play the guitar, and I wanted to sing and play at the same time! Then I started writing songs because I didn’t want to play covers for the rest of my life haha!

What did you want to express with your debut EP ‘The Other Side Of Waiting’?

I wanted to show how big emotions can get, even though it starts out as something small. It’s kind of a coming of age project (cause I was coming of age hehe), and when you’re a teenager, every emotion is blown out of proportion. I wanted to reflect that in the music, because I want to send the message that no emotion is too small.

You struggled with lack of inspiration during the pandemic, how was the situation in Norway?

Well it was pretty depressing… It was locked down for a while, opened up again a bit and then it was locked down again. We are still locked down and I miss my friends and just everything. People are starving for social situations, but we have to stand together to fight this….

How did you deal with the pandemic and the extra time we weren’t used to?

I actually moved home to my parents for five months. Started working as a health care worker and didn’t really do music for a good while. It really sucked and I realized that I HAVE to do music for a living, because it gives me life!

What helped you get back into it?

I just pushed myself A LOT to write music even though I didn’t have any inspiration. Suddenly one day I had something to write about, and I was so happy that I pushed myself.

Congratulations on the release of ‘Waiting’, what themes are you touching upon in this album?

Thank you!! I’m touching upon themes like breakup, being in love, anxiety, moving from a small town to the city, losing friends and so on! I think you will find something to relate to either way.

Tell us about ‘Say Something Now’, what does that project mean to you?

‘Say Something Now’ is a song I wrote about a very spesific moment in a breakup.  It was that moment where I was standing at a crossroad, and needed to know if there was anything left to hold on to or if it was time to move on. I needed that other person to just speak up and be honest. I remember feeling desperate to know what was going on in his head, cause I just couldn’t hold out any longer with beating around the bush. For me, Say something now is kind of a sequel to one of my earlier singles ‘Quiet’. Where ‘Quiet’ talks about realising that your relationship weren’t as strong as it used to, ‘Say Something Now’ is at the end of the road where you finally put it out there, that this is bothering me so much that it might be the end of us!

Are you working on new music? What can we expect from your future releases?