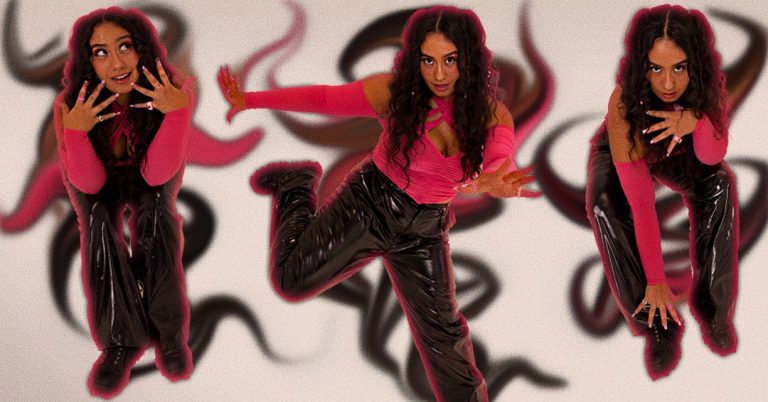 Soaring Through The Cosmos With LAILANA

Catapulting through an assortment of galaxies, both sonically and visually, is an artist named LAILANA, who also goes by her alter ego identity, Galactica Shora.

LAILANA, who is of Palestinian/Lebanese and Filipino descent and who is currently hailing in London to pursue music, tells us that life has been “a little crazy” recently. It’s everything she’s ever dreamed of: “I’m very much feeling the fantasy right now!”

Since the age of 6, her mother suggested she train in classical opera and since then it was a string of musical theatre, choir and band work that soon aroused the idea of writing her own material, an assignment LAILANA took on at only 11 years old. “After graduating from university in 2018, I set a goal to start recording my own music and ended up with 10 singles”, she tells us. “…stories from my childhood, teenage years and young adult life”. It wasn’t until 2019 when ‘Loneliness ≠ Real’–a soul-infused lo-fi canzone and the first to be released from the ten singles– saw the light of day.

Like all modern love stories, a worldwide virus threw a spanner in just about everything LAILANA had planned, forcing her to push the breaks on her voyage to new dimensions through music… albeit, this pause came partly as a revolution.

“When I started this music journey I wanted to do a little bit of everything. I kept experimenting with different genres but found the most comfort in indie-soul. As an artist, I am always evolving, I don’t think sticking to one sound will ever do me any good, to be honest, and it’s important to remember that there are no rules in music!” Radio silence allowed LAILANA to craft music based on emotion rather than choosing a sound and building from it, and it’s a newfound method she won’t ever look back from.

Although life around me was literally put on hold, it gave me the time to fully immerse myself into my music

Launching imminently will be LAILANA’s debut EP, ‘Galactic Shores’; a sweeping cinematic and genre-bending experience that’s self-proclaimed as an ‘aquatic-alien modern-day love tragedy’. The title ‘Galactic Shores’ is one LAILANA has held close to her for quite some time, based on real events that occurred during her upbringing in Dubai. “It’s about a past relationship of mine, where in the beginning I thought was out of this world”, she outlines, reminiscing nicknaming an ex of hers ‘Galactic Boy’.

I have created this concept of a place called Galactic Shores, which is a safe haven for myself in outer space, on a foreign planet with myself as the only inhabitant. It was a place I could escape to whenever I needed

This is where the alter ego, Galactica Shora enters the picture. “I think Galactica came about as a coping method during that relationship’, LAILANA clarifies, explaining how when detaching herself from reality and treading onto the sandy Galactic Shores, that’s where she feels she can express herself wholeheartedly. “I could tap into her mind and write and write and write for hours”. Thanks to Galactica, she now acquires a rolodex of 50 songs and counting.

Title track ‘Galactic Shores’ uncovers the beginning stages of a relationship LAILANA found herself in; a track that encapsulates the euphoria of falling into lust with someone, yet being unsure about the person at the same time. “It was only meant to be released as a single, but as the relationship evolved, my time on the Galactic Shores did too. So I thought, ‘Why don’t I build this aquatic alien world where I can describe each stage of my love tragedy to my listeners?’ My plan was to ride the waves and see what I could come up with”.

LAILANA’s clear adoration for outer space dates back to her father repeatedly telling her younger self to look up at the night sky, asking: “Do you think that’s a spaceship?” The intrigue has only grown since then. “Every time we discover a new planet my heart explodes a little”.

Before the introduction of ‘Galactic Shores’ we had only the pleasure of hearing standalone singles from LAILANA, tracks that have only shown us an indistinct version of the artist. “My listeners are so used to getting one song at a time so I wanted to create something that they could listen to for 13 minutes straight; to zone out of real-life and travel somewhere else”. With ‘Galactic Shores’ an introduction will be made, and LAILANA’s façade will fall, unveiling an artist of multidimensional talent.

“For me, it’s always been the most important aspect of creating music”, she starts, explaining how pivotal narratives are within her music. “There’s this quote I saw somewhere that has forever been burned into my brain, ‘Art describes space and music describes time’. My music has always been like my personal fuzzy pink padlocked diary, but one that the whole world has the key to it”. The EP begins with ‘Galactic Shores’ which documents a blooming love, then we hear ‘Pan!c (Interlude)’ which spotlights paranoia in a relationship and the possible threat of a third party. By the time ‘Temptation’ rolls around the relationship has come crashing down and we explore whizzing emotions of deception and grief that follow the loss of a lover. ‘The End’ is just that, the grand finale that sees Galactica rise from the ground and shower herself in self-love.

Discussions to bring ‘Galactic Shores’ to life with its very own short film took place back in November 2020, and after an entire year of working with cinematographer and friend Ollie Paxton, LAILANA’s vision has been brought to life, and it’s yours from the 12th November. “I won’t give it all away, but expect big dance numbers, multicoloured aliens and a majestic CGI purple spaceship!”

She makes it known that despite ‘Galactic Shores’ being a breakthrough moment for the artist, it isn’t only for LAILANA, it’s for everyone that has experienced a dagger to the heart, and to the people that have come out of it stronger than ever. “I hope it gives my listeners a chance to escape reality as much as it’s given me that opportunity to do so”.

LAILANA has big plans for the future, most notably the plans to conjoin the universe of ‘Galactic Shores’ into our very own, taking to the stage and having us hop on board her spaceship. “My plan is to spread some Galactic love to the masses!” Our bags are already packed, are yours?