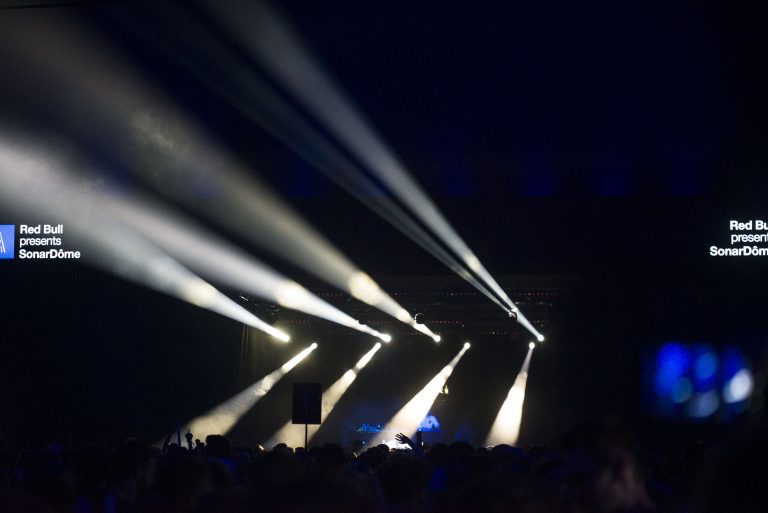 Few festivals have the longevity to stay relevant and Avant Garde after 25 years, Sonar however does exactly that. Born with the aim to bring an event to Barcelona with an alternative and experimental aesthetic, Sonar has now expanded to cover seven countries across the globe, with Istanbul and Athens becoming recent additions. Barcelona being its original home brings in the biggest artists and crowds. 2019’s edition saw Stormzy, Skepta and Disclosure headline and although official figures have not yet been released, it’s believed over 120,000 people attended the festival.

It takes first class production to merge artists from the Dance, Grime and Hip-Hop worlds, often these acts interchanged between genres on the same stage. Stormzy, for example was followed by DJ Seinfeld, who in his own right is a very left field DJ, but the crowd loved it. It was this stark contrast that cropped up everywhere at the festival, it was almost as if the organisers were testing us, just how large can the musical sphere at Sonar be and what can we handle?

The festival was split in two events, Sonar by day at Fira Montjuic and Sonar by night which was 20 minutes away at Fira Gran Via. The day event played to Barcelona’s amazing weather, with the main stage being outside, green AstroTurf was laid and giant visors helped to supply some pieces of shade from the 30-degree heat. The night event was in a giant indoor complex, somewhat fancier than the warehouses we’re used to partying in. The Sonarpub stage gave one of the best settings for the closing DJs with the sun rising above the stage at dawn. There’s nothing quite like dancing under the moon.

Sonar by day built an event around emerging talent with the red bull stage playing a predominant part in this. Two young artists who made their mark on the event was Nistra and Perel, with the latter playing a live set that involved warping her own vocals over broken dance beats. Nistra who has close ties to the band … where he is a guitarist played a set that ranged from drum and base to industrial techno, it was unexpected considering he was opening the festival.

Mans O also stood out on the Sonarhall stage, playing a live set from his latest EP ‘Three Stages of Change Appreciation’, the artist merged improvised dance alongside performing himself. Two other dances accompanied him on stage, the music started slow and as the went on the beats became heavier and darker. This was a unique performance at the festival, and it captivated the viewers.

Each day there was an artist that drove the music forward before the night event. On the Thursday Daphni, Caribou’s dancehall alias, was given the task of closing the event, with the night event starting on the Friday, this was a slot with big expectations. Daphni delivered what was expected, a fast-paced mix of techno, disco and African selections. The highlight was his mixing between his latest single ‘Sizzling’ and Four Tet’s ‘Only Human’, going in between two of the hottest records of the summer.

Artwork closed the Saturday with a set that was driven by upbeat disco and house. His performance clashed with Stormzy, who was playing at Sonar by night however the DJ still managed to pull in one of the largest crowds of the festival. Following from a killer set from Maya Jane Coles, Artwork’s usual style of disco would perhaps have been too slow for timeslot forcing him to play one of the best sets I’ve heard from him.

Red Axes played the final notable set from the day event, a rare live performance which was surprisingly based around their older material. I expected a set based around their last two EPs however none of that material was played at all. The performance was everything expected from Red Axes, it was weird and left field, it was a little less Dance driven than their studio productions however they had the crowd moving throughout.

With the day event leaning towards the up and coming talent, Sonar by night featured some of the biggest names in the dance industry. The likes of Joseph Capriati, Amelie Lens and Dixon headlined, with performances from Underworld and Four Tet also. Often the line-up was almost too good with artists clashing frequently, not the worst problem to have. Being based in an indoor complex, it had a dark, warehouse vibe which suited the production of heavy strobe lights across the stages.

Friday night started with a bang thanks to a live performance from Acid Arab. Their psychedelic style of dance music was mesmerising, with heavy influence from the Middle East and Asia they create a style of music that really stands out. Legendary duo Underworld followed, now both in their sixties, they displayed the energy of more than half their age, especially Karl Hyde who provided vocals throughout. After a solid hour of building suspense, they finally played ‘Born Slippy’, one of the most famous dance tracks of all time, the whole room exploded with joy.

After Underworld’s huge performance Sonarpub was the stage to be at for the rest of the night. Daniel Avery played a set that stuck with his dystopian techno aesthetic. Dark and twisting, his DJ sets are replicating the sounds from his last EP ‘Dominuendo’. If you like that gritty, aggressive side of techno then there’s no one that does it better than Avery.

Four Tet followed with what felt like a once in a lifetime set, having placed a media ban on all photography and videos, the artist played outside in the pitch black using only the moon for light and aesthetics. It was something so completely unconventional however it enabled us to concentrate only on the music without any distractions. The performance felt like a protest to what the modern-day dance scene has become. Previously underground, the world has now been opened to live streams and endless Instagram stories. Perhaps this was Four Tet’s way of fighting back against this.

The Saturday night had a lot to live up to after the Friday night success. Skepta stepped up and bought the south London grime scene with all the energy that comes with it. Playing a set that revolved around his last two albums ‘Konnichiwa’ and ‘Ignorance is Bliss’, the pace never slowed and the performance was topped off with a rendition of ‘Shutdown’ that saw mosh pits across the stage.

After Skepta’s performance had finished, many of the fans who were so gripped by the hour of grime didn’t know where to go, most stayed at the main stage to see what was next. HAAi, a DJ whose aesthetic is the opposite of Skepta’s then played to a crowd of around 20,000. The Australian DJ was only given just over an hour and wasted no time in setting the pace. It was a performance that was fifth gear from the start, with hard techno and psychedelic beats, Insert supplied visuals the made the experience feel perfectly curated. Again, previewing some of her latest work from her upcoming EP ‘Systems up, Windows down’, this was a set that showed how far the DJ has come.

Dixon closed out the festival with a set that was both melodic and tribal. The set was steady, but the DJ didn’t take any risks. It was a pace that suited the set time, many were on there last legs at this point and Dixon wearily took the crowd over the finish line to mark an end to a great weekend.

By splitting the event into day and night events Sonar managed to incorporate innovate, emerging talent alongside names with a certain wow factor. At Sonar by day it felt like you were constantly finding something new and unique, whereas at Sonar by night was more of a standard warehouse event except with very high-class production and huge names. It was this vast change between both that made it stand out in the crowded list of European festivals. The curation to include such a wide range of genres was brave but it allowed each varying style to shine. Stormzy and Skepta showed just why Grime has become a worldwide phenomenon, Acid Arab and Red Axes displayed the weird and wonderful side of Left field and HAAi, Four Tet and Daphni showed why Sonar have placed so much emphasis on dance music for so long. After 26 years Sonar still feels young and fresh, with a key focus on the future, their worldwide impact looks sure to grow for sometime as yet.