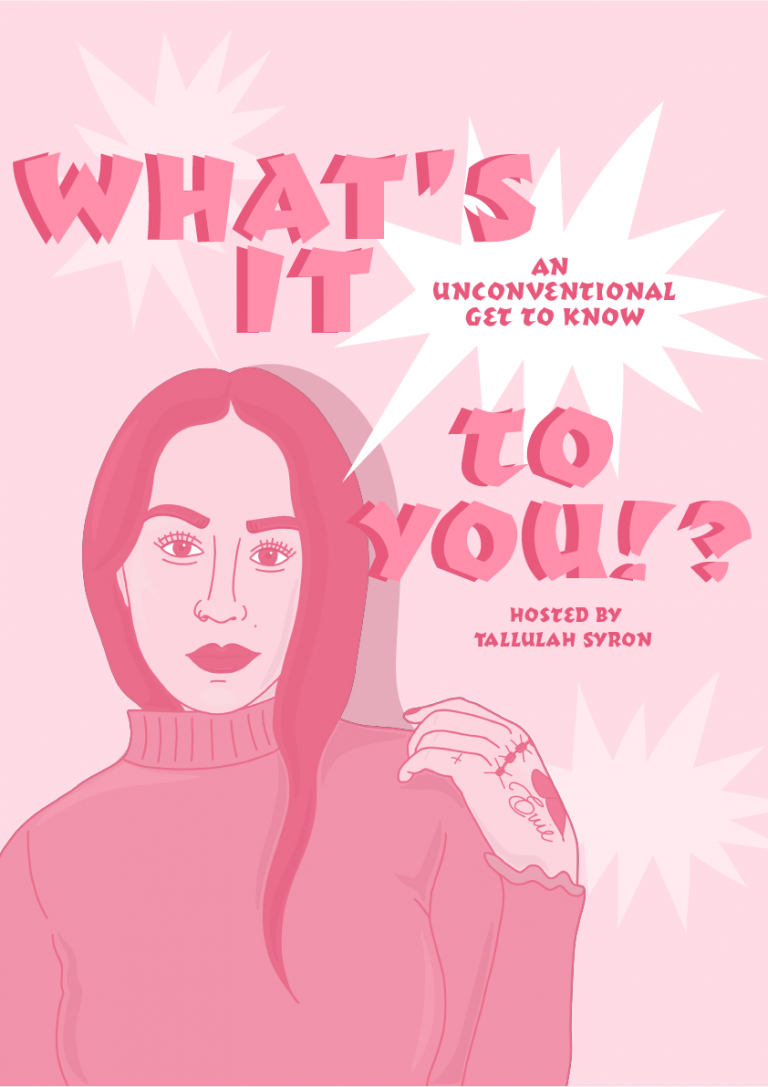 Tallulah Syron presents ‘What’s it to You!?’

“Although no doubt every musician in the series and beyond reflects on all aspects of their lives for their music, there really is so much more to each of them than just their music, and I guess if there wasn’t there’d be no music at all. Having the opportunity to listen and learn from them whilst digging a little deeper was an absolute pleasure, and I hope we hear so much more of whatever artists want to share in series to come!”

In a world that seems like a distant memory, a large chunk of my time was spent searching for new artists and putting on shows. Organising venues filled with people wanting to hear something new, and artists buzzing with nerves and anticipation waiting to open their mouths and hearts and share their creations – I miss it so much. At the end of the first lockdown I really felt for a lot musicians – having previously worked as a songwriter and singer myself, I know the horrible feeling you can get when you don’t feel productive or feel unable to express yourself, so I decided I wanted to do a series of interviews, something fun and lighthearted with artists, a chance for them to just have a chat.

Sick Love Zine is an independent platform that has a large focus on young creatives having the issues that affect them. Since we had previously collaborated together, I felt they would be the perfect place to pitch the interview ideas to. Sick Love’s wonderful founder and editor Izzy got back to me suggesting the interviews be done as video format and with me hosting them; so the two of us along with Fraser Hanley-Nicholls, (who filmed the series, minus the Pxssy Liquor episode that was filmed by Aria Shahrokhshahi) began brainstorming ideas and ‘What’s it to You!?’ was born.

The concept of the ‘WITY’ interviews are that the artists chose the location, what activity we’re doing whilst we chat, as well as what we’re actually chatting about. We wanted artists to get a chance to discuss topics that are close to them, felt personal or important to them, or to even just choose subjects that they wanted to bring light to; all whilst having fun and feeling comfortable! Allowing the artists to choose the topics also meant we could avoid any questions they didn’t feel comfortable with, we really just wanted them to be able to express themselves without any pressure.

Music interviews often consist of a lot of questions surrounding what the artist has been working on or towards as well as announcing release dates and future plans – It felt important to try and avoid these kinds of questions. With so many plans not going to plan right now because of the country’s current restrictions, I think it’s so important that all creatives really look after themselves in a compassionate way, without comparing, or scoring achievements.

Between lockdowns I was super lucky to have Charles (who is featured on the last episode of the series) play at the night I co-run Trash Like You. During his performance Charles addressed the audience and said something along the lines of “for some people this period of time will be time just to pause and rest, so that they’re ready to go once this is all over” he went on to talk about people trying to do the most in this time and why in some cases the opposite is necessary. That really resonated with me and in turn solidified my goal to make sure the ‘WITY’ series was about whatever the artists wanted to make it about, and not just career based questions.

With the artists confirmed and destinations being chosen, between lockdowns and restrictions being lifted – myself, Izzy and Fraser made trips up and down the country. After feeling pretty trapped for the past year, travelling (even when it was just to other London boroughs) felt so rewarding and meeting new people and interacting face to face (at an appropriate distance) was a delight after countless zoom glitches. Izzy, Fraser and I knew that with such a vast range of genres and styles between the artists confirmed there would be huge differences between chosen topics and locations, but I don’t think any of us quite realised just how different each episode would actually end up being.

Having the artists lead the interviews really meant that they were the ones to set the tone, and in turn it allowed for more personal and vulnerable moments that I don’t think any of us were expecting: like Elli Ingram reading an extract her mum had written in her school diary when she was in year 3, Quarry expressing his gratitude for his parents and upbringing and Shae Universe opening up about having to remind herself of her own self worth.

Sometimes – especially in creative jobs – it can be hard to see yourself as more than just your title. It can be what you spend most of your time thinking about and in turn a lot of your time being asked about. From experience I’ve had many times where creative endeavours have been the last thing I’ve wanted to talk about, so I am so pleased we were able to create an opportunity for musicians to talk without having to just talk about ‘being musicians’. If there has been anything that the series (and lockdown to be honest) has taught me it’s that whether someone is a musician, an illustrator, a plumber or a doctor we’re all built up of so many layers, our interests and stories. Although no doubt every musician in the series and beyond reflects on all aspects of their lives for their music, there really is so much more to each of them than just their music, and I guess if there wasn’t there’d be no music at all. Having the opportunity to listen and learn from them whilst digging a little deeper was an absolute pleasure, and I hope we hear so much more of whatever artists want to share in series to come!

Watch the series so far below