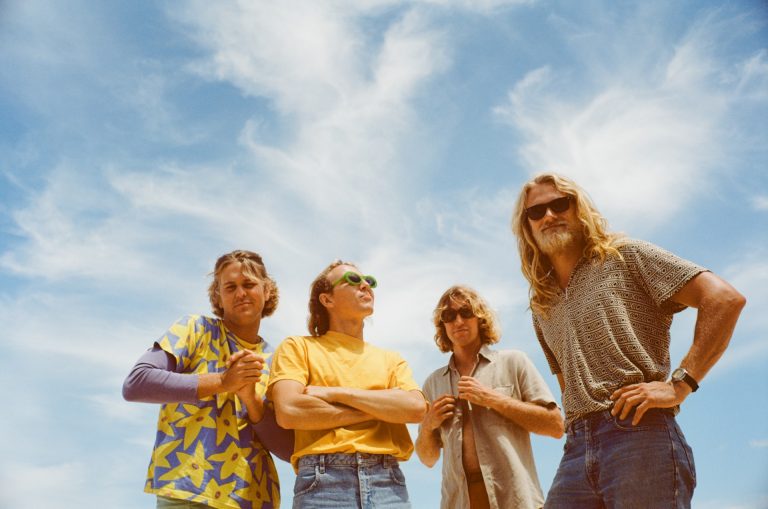 The Infectious Warmth of Babe Rainbow

Disclaimer, we strongly recommend playing ‘Changing Colours,’ Babe Rainbow’s new album, as you read through this interview. While the warm sounds of psychedelic rock will play, you will imagine surf waves crashing; you will smell the fresh pot of coffee and contemplate why the hell you are not living in Australia already.

Miles and Jack, from Byron Bay’s psychedelic rock band Babe Rainbow share insight into the incentive behind their music just after they finished watching a beautiful sunset like a tamarillo.

Inspired by the Babe Rainbow painting by Peter Blake, Angus, Jack, Eliott, and Miles formed a band one day after a surf with no hesitation. Together, they create music that will warm the coldest heart with their imaginative lyrics and boozy guitar sounds.

Let’s get into it.

Are you guys excited about the release of ‘Changing Colours’?

M: Yeah, we’re very excited for people to hear those recordings, finally, we’ve played some songs off the record at shows but it’s always so different. The songs are quite old to us now and still very special, we had a lovely time making them all and putting them together, it’ll be great to move on to new things and celebrate this past creation.

Where are you based at the moment?  What are you guys up to these days?

M: We’re all living in the warmth of the Lismore shire at the moment, 5 or so minutes from each other. We spend most of our time with our families and partners, occupying time as it comes. We work on our own farms or gardens, we get together to jam, work on paintings and things, we all spend as much time as we can at the beach surfing or swimming. Reading, writing, cooking, cleaning, learning, listening, thinking and speaking are very important to us too.

Could you share the story of how you guys met and formed a band?

J: We met at Elliot’s share house when he would put old surf movies on a projector and play records in his back yard and charge $10 for sausage on bread doobie and a beer. I’d cycle over, it was good times. and then everything revolves around surfing and getting gigs mostly Fingal and playing up in Brisbane, when I moved to Rainbow Bay we started formally the Babe Rainbow and writing songs for that project which is now what it is still.

Could you also introduce each member and their role?

M: All of our rolls are always growing and shifting and move to suit our lives and changing energies and certain songs, but for the sake of the question; Angus is responsible for the words people hear and the voice that projects them. He also organises a lot of things behind the scenes, tour posters, merch, so many things it’s incomprehensible. Elliot sits in the groove on the Bass but is also responsible for some poetry, a lot of the art associated with the band, the new album cover, he brings vitamins on tour too, very important for our health. Bass, Poetry, paints and vitamins. Jack is the captain, so much of the song writing, all the sprouts of songs and the work that goes into them to let them grow, all of the beautiful chords and strings are his work and Jack even sings too. Jack does lots of other work associated with the band too. Miles, I, make the groove on the drums and percussion, I’ve been known to be responsible for other little sounds on the recordings. Have been experimenting with other instruments and sounds lately also. I usually make or source coffee on tour haha.

When did you guys know you wanted to fully commit to the band?

J: From the beginning

M: One day, I had never met the band, the next day we had met, played a show and I had joined and knew I was committed. Early 2019 I think.

What is the meaning behind your name ‘Babe Rainbow’?

J: It’s a painting by Peter Blake as well as sounding like Rainbow Bay a place we live near and surf at. The meaning is open to interpretation.

How has living in Byron Bay influenced your sound and music?

M: All of us living here, together, means we have time to jam or practice and meet up whenever our lives allow us the time. To be able to pick and choose when we play together is such an amazing thing, I feel this has changed our music for the better. Being able to take the time to rework and refine a song or even a part within a song is such a luxury. Of course, it’s very beautiful here and things operate, perhaps, quite differently to a city. The geographical and what you might call, cultural influence of the Byron shire, might just be present but subconscious haha.

What do you want your music to represent?

M: I can’t speak completely for the others but I really want our music to be warm space for a listener to enter, to welcome in Joy or any feeling that needs to be felt. Not to completely step away from what is happening in their lives or the issues of the world, reality, but to have it be enhanced by our music, to lend a hand with the day or the moment. I suppose, a lot of people have told us of the Joy our music brings to them in their lives, I’m very honoured to be that, to represent that for some.

How would you describe the sound ‘Changing Colours’?

J: Coffee in a pot, the pleasant feeling of knowing it’s there and the various potential feelings and thoughts you might have and experience while taking time to sit and sip. That’s a very warming feeling for me. This album is a new sound for us, a step forward in creating something, yet again, newer.

Could you share how you got to collaborate with Jaden on ‘Your Imagination’?

M: My Partner, Mashara saw that he commented on one of our photos. We started talking to Jaden, we sent each other our latest albums and spoke about making things together. We had ‘Your Imagination’ already recorded and it had that long instrumental solo section that seemed perfect for Jaden. I like the verse Jaden put down so much.

What is the inspiration behind ‘Zeitgeist’?

M: That song was originally a beautiful solo acoustic song that Jack was working on. We jammed it in our friend Kyle Mullarky’s studio in Topanga with drums and bass. It worked so well with a Tony Allen style groove which ultimately was changed. Putting a strong beat and bass to the song really changed where it was coming from, I feel. At the time it was written, Australia was experiencing some of the worst bushfires in history and it had been months since it had rained. All of our lives had undergone small or large changes and I personally felt, there were new thoughts and feelings being shared by many, a shift in what was important. The spirit of the time, the zeitgeist, was changing.

What is your favourite song from the album right now and why?

M: At the moment, I like ‘Thinking Like A River’ the most. I love Jack’s chords in this little moment after the chorus, maybe it IS the chorus, actually. I’ve always really admired this song, it’s simple but always brings such a sweet feeling. The song ‘Changing Colours’ is maybe my long term fav, though, it’s so playful.

Who would you love to collaborate with in the future?

M: wow haha, I could go on forever, the list could be so extensive. We’d love to work with Luca (Domingo Mariani/Maria Benz) again, as a collaborator, producer, anything, he’s an amazing musician, he’s our best friend really, so of course working together is so natural. We miss Luca. Niños Indigo maybe. I love Liv.E’s music at the moment too, maybe that would be an idea .

Are you planning a tour?

M: Yes, definitely planning more touring, more shows, there’s always something coming up. We’re going to WA this weekend actually. There will certainly be shows later in the year though, I don’t have the details for it yet but I’m sure they’ll be somewhere soon, we’ll make a nice poster first though.