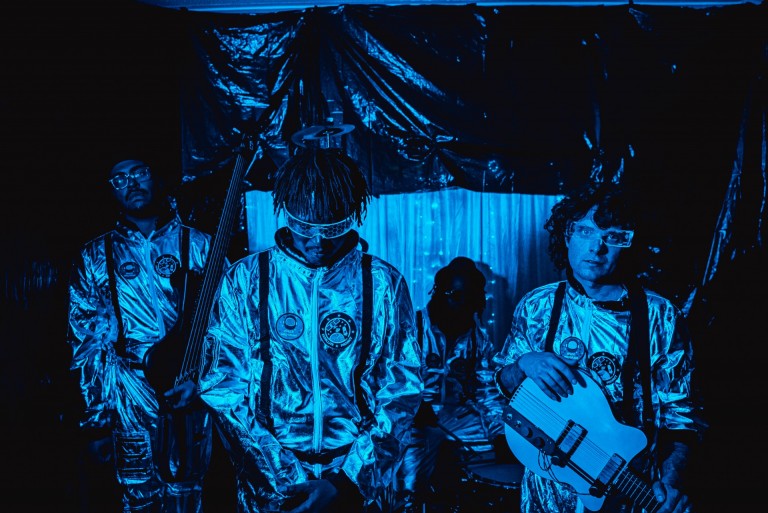 ‘Love Cadet’ is the first single from the multifaceted artist since last year’s debut EP “The Tennis Champions”, which will be followed up by new track ‘Orbit’ featuring Pho Queue Crew . Brimming with hip-hop, electro and funk the track clusters rhythmic complexities with lyrical playfulness. We speak to Tom Ford about what to expect from the upcoming project.

Hi Tom, thanks for speaking with us, can you introduce yourself to our readers?

Hey all, I’m Tom Ford, a singer songwriter, guitarist and producer based in the UK predominantly but often found elsewhere.

Your music defies genre yet sits between jazz, funk and hip hop what would you say you would like people to experience when they hear your new single? And where do you think they would place it in their record collection?

I’m generally not thinking too much about specifically how to blend genres or even my influences when i write I try to just finish whatever initial ideas come out naturally, It’s like its own little individual world. So I think I’d hope that the experience of my music to a listener would be similar, it’s not so much about defining where the music fits in the wider context but more the individual experience of the listener to that music in that moment and then they can decide themselves where it fits in their life and musical preference. I feel this is getting easier as music is becoming more homogenised and less genre specific anyway, it’s no surprise anymore to find people with vastly broad music tastes and in a way I feel way more inspired to write and create my music in this age of blurred boundaries stylistically. That said i’ll never be annoyed if someone sits my music next to
Talking Heads in their collection.

I was quite late to the whole socials thing with instagram etc and realized rapidly that my desire to have ‘tomford’ as a handle in any kind of variation was long gone what with the brand and it being a common name. So I decided to just go for something totally unrelated but curiously memorable, the name itself is actually from some long forgotten injoke with my friends I grew up with, I don’t really remember the context but the name ‘The Tennis Champions’ has stuck in the back of my mind all these years. It’s also a little homage to those old friends(we called ourselves Friends Club). With regards to “The Return of The Tennis Champions’ as the title to my next EP I just like the idea that listeners might create their own fictional world and meaning for these so called returning tennis champions, it’s just a bit of fun really.

You studied at Berklee and have been working extensively in the US and UK jazz scene. How would you compare the two?

I feel that jazz as a music is part of the African American folklore and culture, its deeper there than here as it is their music, it’s more than just a genre it’s a tradition that spans back to west africa so I feel there is such a deeper connection to that on every level than here in the UK. That’s not to dismiss jazz outside of the US as culture and traditions aren’t bound by borders and they move freely around the world and influence cultural
innovation and expansion. I feel deeply honoured and grateful to be able to work jazz musicians both there and here and being part of such an important tradition even in a small way is a beautiful thing.

Your music explores the idea of humanity and our relationships extensively what draws you to the subject matter?

We’re naturally a social species so i think the basis to all our existence heavily revolves and relies on our relationships to each other, I also am an anxious introvert who’s constantly avoiding confrontation and going through simulated scenarios of issues in my head so I feel in a therapeutic way by writing about this stuff in my music I can actually channel that anxiety towards something more worthwhile.

You have worked with a lot of different artists. Who would you say your ideal collaboration is?

I mean some of the people I am already fortunate to work with such as Reuben James, Chris Dave and Karma Kid you could say are ideal as I have gained so much from working with them creatively. If we’re talking about dream wish list of people I’d like to try working with one day it would definitely be a toss up between Björk, Thom Yorke and Milton Nascimento…. maybe just all 3 in the same room!

In your perfect world in what situation would you like listeners to enjoy your music?

I think live is always best, I always feel best on stage and its always the most accurate representation of my music, mistakes and all. But other than that I just hope my music elicits some emotional response in a listener, the situation they are in at that time isn’t too important to me.

What is next for you

The full EP ‘The Return of the Tennis Champions’ will come out in March, between now and then there will be singles each month and I will also be back at Ronnie Scotts on march 15th with my band to celebrate the EP release. Outside of that I’m planning to do some more collaborative records for the rest of 2023 and aim for a full album early 2024.