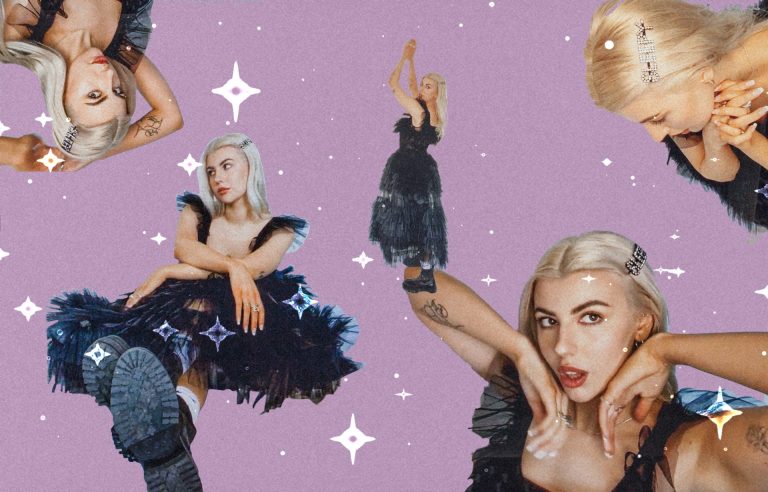 When life gives you lemons, make a lemonade and when 2020 gives you a virus, stay at home and make an EP. That’s what Sølv did, and it sounds freaking awesome.

With never-ending lockdowns and uncertainty found at every news blast, a singer-songwriter Sølv decided to comfort us with her new EP, ‘Synthetic Feelings’, which was produced from A to Z in her bedroom. The self-sufficient artist created a sixteen-minute harmony full of nostalgia and self-expression. Dark-sounded tracks put you in the blissful mood of being somewhere between hell and heaven; an innocent and mysterious world of imagination, combined with self-fulfillment, and personal growth. The London-based artist is a reflection of a pop singer who hates mainstream and has its own R&B dark pop path, which paves a promising way towards success.

The name Sølv isn’t a coincidence as it stands for ‘silver’ in Danish and has its special meaning to a singer. “I love Denmark, and my favourite place in the world is Copenhagen; I feel such a connection with the place, so it made sense to me to use a Danish word. I love the connotations of silver; it’s reflective and all-encompassing,” she says. Sølv thoughtfully chose the name and started to reflect herself through melodies. She was involved in music ever since a young age however, only a few years ago she decided to give it a try and compose her own tunes. “I’ve sung since I can remember, but I wrote my first songs when I started playing the guitar at around 15 years old. A couple of years later I decided to teach myself production and that’s when my world opened up and I really found my sound,” she says.

A desire for freedom of word and a strong belief in abilities, let the singer release her soul and transform it into magic called ‘Synthetic Feelings’. Speaking on creating the new EP, the singer says: “I wrote, produced and recorded the whole EP during lockdown so it was a pretty intense time. Luckily my boyfriend planned everything down to a ‘T’ for me, so that I could get on with the creative parts. We also shot the artwork from our flat and I did the graphic design. It was a strange time to create an EP with everything going on in the world, but I’m so glad I had something to distract me and work towards.”

‘Synthetic Feelings’ is like a treasure, with it’s creation based on sincere thoughts, but also a need for distraction from an uncomfortable reality. During the process, it turned out to be an effective project which, like a trophy, can be put on a pedestal with a label ‘the great achievement of 2020’. Many creatives found it difficult to be productive during these times, while others have opened various doors to creativity and went beyond their expectations. That’s what Sølv did; she poured her idea on a paper, then converted it into music which reflects her temperament. “The EP is basically a vision into my mind. Each song explores suppressed or fabricated feelings in one way or another. Each song expresses a different side of my personality. I wanted it to feel like a journey from start to finish, almost like going from day to night,” she says.

Creating music is not only sharing thoughts but also expressing feelings. This ability of expression efficiently fills the gap of not being heard or understood. “I’m not always the best at articulating my feelings or even knowing how I truly feel in the moment. Writing music allows me to explore and make sense of what’s going on in my head,” Sølv admits.

Asking the artist about a favourite track is like requesting from a mother to indicate her favourite child, but at the end of the day, there’s always something to emphasize in each song. Sølv admits that her favourite baby changes every day. “Production-wise I really love Gentle Riot, but Girls Should Be is a really special one to me. It explores the toxic conditioning women frequently have to endure and aims to empower them, encouraging them to have their voices heard. It’s almost like a note to my younger self and definitely the rawest and honest song I’ve ever written.”

Her current inspiration is James Blake. “He’s the reason I started producing music. I just think he’s an absolute genius,” she says. The song considered by her as a life-changing track is ‘Limit to your love’, by the same artist. Asked about the artist she would like to be, she says: “I’d go back in time and be Bowie; probably during his time in Berlin with Iggy Pop. I’d love to be able to step inside his mind and harness all that brilliance and creativity.” It could be interesting, probably extremely trippy times, but definitely worth experiencing.

In the future, Sølv would like to be a puppy mum who sings for her fluffy children, surrounded by loved ones and fulfilled as an artist. “Making the music I love, playing shows around the world and collaborating with amazing artists/musicians is what I would like to do. Also being surrounded by the people I love and 100 Pomeranian puppies would be amazing,” she says. Cruella de Sølv and her ‘One Hundred Pomeranians’ are on the way, get ready people.

‘Synthetic Feelings’ is just a flicker of what is there yet to come. “I’ve got an exciting collaboration coming out soon. I’m also going to be releasing so much new music this year which I can’t wait to share.” For now, let’s adore amazing sounds of the fresh EP and cherish every single bit of it. Sølv allows us to forget about reality and invite us to float with her music into the world of milk and honey. I am down for that; you better be too.