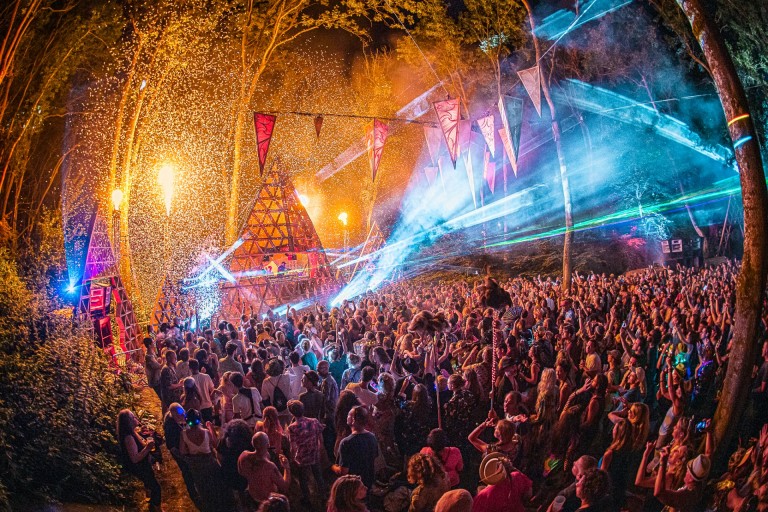 Walk Through a Woodland Wonderland at Noisily Festival 2022

Last weekend, after its two-year hiatus, Noisily festival 2022 rose as a fiery dragon from the ashes. Their devoted community propelled the festival onward into a new age, celebrating one last dance in the Coney Woods before re-location.

This year Noisily commenced its reinvention; taking great pride in appreciating its past and looking resolutely toward a bright and daring future. They hosted a triumphant 6 soundscaping stages and invited a huge range of Techno, Trance, DnB and bassline DJs from across the globe to their beloved forest, where they have been dancing for 11 years, since 2012. One stand-out signature of this year’s instalment of the festival was the precise devotion to the production and atmosphere of the event. The mega-thrilling set designs were some 2 years in the making, transporting every raver to their own idyllic surrounding.

Speaking on the production, founder Chris Williams says “the entire team have stepped up several gears to deliver a seismic event and something special for everyone to remember.”

The main stage, which was designed to be their iconic wooden triangle, was situated deep in the jungle-like folds of the festival. They corresponded this triangle theme with phenomenal laser lights, creating an unforgettable sci-fi experience. Starting the celebration on Friday, downtempo, melodic female DJ LIZE opened the main stage and in her own words she “captured mine and thousands of other people’s hearts this weekend.” Other record-spinners that day on the main stage included Tom Real, Audley, Luis M and Ben Coda, with established Eats Everything headlining.

Frida Darko then launched the Noisily main stage with her good friend Tony Casanova on Saturday, bringing the woodland to life with her dreamy downtempo techno. Her music, albeit downtempo, had a driving intensity that ignited the disco; she shifted us through the gears and welcomed another day on the Noisily dancefloor. Carbon (who has consistently provided fantastic albums over the last two years) performed a seismic psychedelic techno session on Saturday night with Lampe & Luis M at the main stage lifting us into the forest treetops. John Digweed, the UK progressive house superstar finished the Noisily main stage on Sunday evening with a mammoth four-hour concert.

The liquid stage represented trance music at its finest, creating a bumblebee ambience with honeycomb LED lights. The hive surroundings became a dreamy environment for nature lovers, this stage was by far a highlight to all, particularly Tristan’s midnight performance on Saturday night. Another honeycomb highlight was Hamish who played on Sunday at 7 pm – this was a rejoicing and euphoric ending to an impressive weekend.

Situated at the top of the festival’s forest hill, was the Treehouse stage presenting pure bassline gooey-goodness as party-goers could see over the whole festival. DJs such as Deekline and catchy bassline master Ms Pink span a high BPM remix of “Do It To It” (we lost our shit).

Smack bang in the middle of the forest valley Noisily placed a unique stage that showcased top-quality street performances including fire eating, dangerous dancing, instrument musicians and so many more engaging interactive skits. Also on top of the music, Noisily heightened the immersively and connection with the ravers by offering a Mind, Body, Soul section near the campsite – here ravers could get involved in yoga, meditation, sound baths, body painting and a variety of other workshops.

Noisily is the cutting edge of music and party knowledge, they foster conscious awareness, kindness, and care for ourselves, one another, and the world we call home. While doing this, they exceeded our expectations and created a life-sized pixie village in the middle of Leicestershire. This event will go down in history since the venue is now relocating due to an infestation of the devastating fungus known as ash dieback. To prevent the woods from destruction, major portions of the forest will have to be felled, rendering the area unfit for the Noisily celebrations.

The festival website says “we are moving to a new home in 2023 and having spent the past year visiting site after potential site, we are over the moon to say we have secured the perfect woodland location in the vicinity of Noisily.”

Regardless of the site change, be sure to add Noisily to your UK festival bucket list as it will undoubtedly surprise and enchant your soul.

You will never want to leave the fairytale forest.