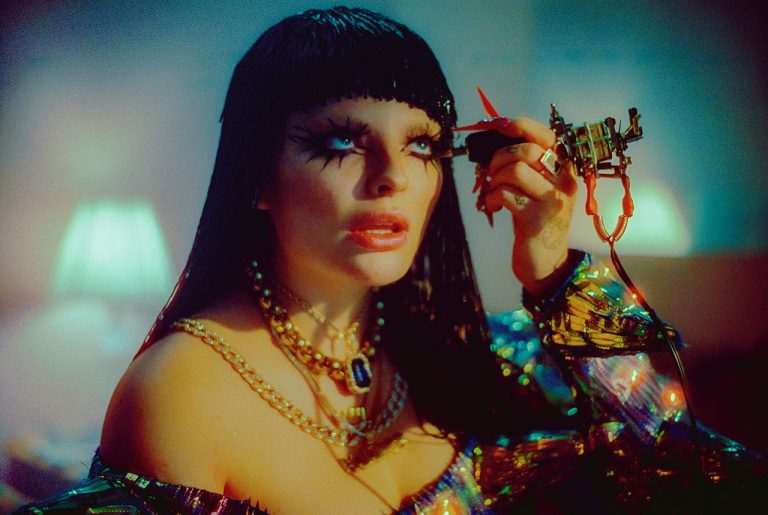 Welcome To The Savage World Of FAANGS

“Talk only gets you so far, and I wasn’t going to let being misunderstood stop my dream from slowly coming alive”, states FAANGS, a 22-year-old pop powerhouse. Following multiple doors slammed in her face, she decided to take matters into her own hands and shoot the ‘RICH KID$’ music video on her own. What acted as an introduction to the chaotic world of FAANGS now serves as a testimony to her tireless perseverance and determination to be a superstar.

Awaiting her debut project ‘TEETH OUT,’ FAANGS releases a new single, ‘Relapse,’ with accompanying visuals shot at the iconic Pink Motel in Los Angeles. FAANGS allows Noctis to step into her world and peel the layers of make-up and extravagant clothes to reveal a girl who used to tell people in the grocery store she will be a rockstar and is completely and utterly obsessed with the dream.

How are you today?

Thank you so much for having me! I’m a huge fan of your magazine. Honestly, today I woke up on the right side of the bed with a better mind set then I’ve had in a while. All I can think about is this project coming out and planning live shows. I am so excited to perform as soon as this pandemic is OVER!

What were your musical influences when growing up? When did you know you wanted to make music?

Growing up I solely listened to Whitney Houston, Christina Aguilera, Rihanna, Green Day and The Beatles. Quite a crazy array of artists! Haha. I’ve always been singing – I swear I was singing before I could talk. My dad gave me a small keyboard when I was 8 that he had in college, and as soon as I started to play it, I couldn’t stop. Then I started writing songs and literally never left my room. Soon enough I was telling strangers in the grocery store that I was going to be a Rockstar when I grew up, the rest is history!

My career officially started at 12 years old. I saw an ad in the paper for a televised talent competition in Canada. I auditioned, which terrified my parents, and ended up winning the entire show. Kind of crazy to think about it, honestly. That show sparked a vicious fire in me that made my starvation to be an artist even greater. After that, I landed in TV for a few years as a child actor, and now I’m fortunate enough to have transitioned into FAANG’S WORLD. It’s been a long road so far, but I’m just getting started. I can’t wait to show the world this project I’ve created!

I always find this question tricky. I feel like my sound is so many genres. I think I would describe it as Pop, trap, high fashion and a f*ck ton of attitude all smashed up in a blender. Hehe. Basically a neon, dark, hot mess that you can rage, dance and cry to.

When and how did you come up with your stage name?

I came up with the name FAANGS when I was 16 years old, coming to LA for the first time. If anyone remembers their first trip to Los Angeles, it’s extremely overwhelming. It’s a city of unlimited potential, laced with dream crushing failure. It’s dark. It’s beautiful. My friend who used to live in LA messaged me as I was driving away from the airport, he used to live there. He asked “Hey, how is LA? Don’t you love it so far? Isn’t it amazing” I responded: “This city is a monster, it doesn’t have teeth, it has fangs. Its going to chew me up and spit me out, I just know it”. After that message sent, I couldn’t get ‘fangs’ out of my mind. I added an extra ‘A’ because I have a gold grill on my bottom teeth with two sharp teeth that look like a’s. The name came from my ever-growing fear and obsession with LA.

Could you name a few items of clothing that are the most FAANGS?

OH! Clothes. My favorite thing in the whole world. (Besides music, of course.) I have this neon yellow faux fur jacket that is floor length, that says ‘RUDE GIRL’ in massive vinyl blue bubble letters. The lining is hot pink silk. It just screams attitude. Definitely FAANGS to a tee. Hehe. I have a few custom gold and diamond grillz crafted by my two favorite jewellers Dolly Cohen and Mazz Amini. Those are most definitely the most me of anything. FAANGS fangs!

What was the main driving force behind your move from Canada to Los Angeles?

I will do absolutely anything to give my vision as an artist the life it deserves. It was difficult moving, I won’t lie. It’s lonely and terrifying, but I really owe all these years of fighting for this dream, to enable it to grow in a city where hard work is embraced. At this point in my life I’ve sacrificed damn near everything to make this music I promised myself I would make, no matter the struggle. I don’t regret it at all, even on the hard days.

Is Los Angeles what you’ve envisioned it to be?

Like I said previously, I love LA and I’m am scared sh*tless of LA. It’s a weird mind bender for me to be living in a place that I grew up seeing in almost every movie. It’s definitely different than I believed it was as a kid. I really have a sick obsession with the work ethic here, but I’m sickened by the bullsh*t. It’s home.

You described RICH KID$ as the building block to the FAANGS world, could you elaborate?

I feel like RICH KID$ as an entity is the perfect introduction to the chaos that is about to unfold. It’s strange but still palatable. It’s dark but still sweet in a way. I want people to be intrigued by the song and video, and search for more. As the vision starts to unravel it gets more and more chaotic. I didn’t want to freak people out at first, but gentle swallow them into this world I’ve created.

The visual for RICH KID$ is your very first visual you worked on yourself. How did you build up and work on your confidence to execute all the tasks surrounding a music video?

When I created the RK visual, I was hustling non-stop across Europe, to gain skills as a song writer and search tirelessly for my sound. I literally slept an hour a night for months at a time because I was trying to uncover what was buried in the back of my brain. I was tired. I was having doors slammed in my face so much because people didn’t understand how big the vision really was. I decided to say f*ck everyone and make the music video on my own (with help from my beautiful Berlin producers Hit Impulse) and show people what it was I was creating. Talk only gets you so far, and I wasn’t going to let being misunderstood stop my dream from slowly coming alive. We shot the music video in an abandoned airport in Berlin, I was able to get some beautiful clothes lent to me from my friends in Prague who run a designer store, and we just hit the gas and started making the world I always toiled over in my thoughts. I needed to see it in the flesh, I was exhausted of trying to sell it to people with words. They needed to see it.

Could you share some stories from your collaborations with Ashnikko on ‘Cry’ and on Rico Nasty’s single ‘Own It’?

I love both artists and am very thankful to consider them close friends. Both have incredible writing talents and strong visions. I am very grateful to be a very very very small part of their musical journeys.

What is your new single ‘Relapse’ about?

Relapse is all about breaking someone’s heart so horribly, yet you know they’d still have you back in an instant. I was in a bad place when I was with someone that I didn’t treat with the respect and love they deserved, yet I came back and they opened the door. It’s kind of f*cked up if you think about it. Damn, am I psycho? Haha. I really write all of my music about what I’m going through. No secrets here!

What is the inspiration behind the visuals?

I’ve basically worshipped Tim Burton since I was very young. I watched The Nightmare Before Christmas, and after that my mind was blown. His vision is so dark, yet so strangely beautiful. I fell down a ribbit hole of all his films and became obsessed with the juxtaposition all his movies possessed. They were creepy yet colorful. Neon but morbid. Sad but exciting. He is truly the biggest inspiration behind my visuals. I just added high fashion and attitude!

What can we expect from your upcoming project ‘Teeth Out’?

I won’t say too much other than, prepare yourself!! Teeth Out is sonically and visually the most incredible piece of art I’ve ever made. I am so proud of it, and I can’t wait to welcome people into my beautifully disastrous world. Get ready to rage, dance, cry and lose your mind. I can’t wait to have you x