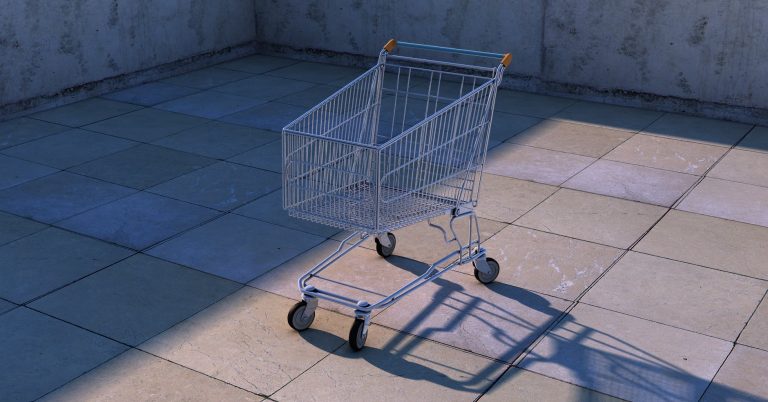 My job is a prison, and I am the warden. The fumes, the decay, the neon lights faltering along the ceiling lead me to nowhere every day.

I joined the Happy Shopper Super Box Store at 17—I’m 36 now. It was supposed to be a summer job.

Every time I tried to leave they would give me a nugget of extra responsibility, the mirage of a raise or at the very least, a gift card for Sabrino’s, the in-store cocktail bar where every drink tastes basically the same but with a different dried herb stirred in. I became as numb as an anaesthetised hand, but then I met her.

Our pupils mingled, dancing a dilated tango across the break room.

She walked with a limp, and you could make out her silhouette from the darkest corners of the store. Her smile had a wry quality that sucked my face in like a magnet, and her fragrance was cheap yet moreish.

We fell for each other, hard, working the floor and each other in the stockroom at every pilfered moment. She wore an aura of sadness around her neck, just like me—her ends were tethered and frayed, just like mine.

Neither of us respected our colleagues or the store’s greased up, pocket-frayed clientele. One time we planted a digital camera in Tilly’s backpack, and she got fired, fast, as if she was actually shot from a canon. Then there was Cody. We filmed him eating store’s promotional chocolate bars on the job and sent it to the boss. He’s an alcoholic now.

The rampage continued as did our affair, every ill-doing fuelling our thirst for revenge on The System, The Man. Things were just so until The Big Boss began to eat our love like cancer.

Everywhere we went his waxed toupee, and Irish coffee stench followed, like a gas leak in a family home. He would make comments about how her limp would make her ‘outstanding in the sack’ (the abnormal rhythm, he meant) and how she was nice and ‘pert.’

I could hear her through the wall as she wept in the bathroom every lunchtime, sobbing and convulsing in a sea of phlegm and anxiety. It was too much to bear—I had to dry her eyes, somehow. So I did something. But, it backfired.

The dose was only meant to clear out his bowels and make him sick for a few days—but it clashed with the cheap scotch rolling around in his belly and prompted a caustic reaction. His ulcer popped, and he hit the floor, 350 pounds of flesh spread out all over the break room.

I lost my freedom, but I did it all for her, for us. It felt noble, the ultimate stamp of enduring love—that thing that Meatloaf wouldn’t do.

It turns out she never really loved me; it was all an illusion. She was married with four kids and a distant husband. I was just a release valve, as throwaway as the items in the store.

An eye for an eye is the basic law of retaliation. What I believed to be noble was an act of manslaughter. I was deceived into thinking otherwise and a man, albeit a vulgar man, lost his life.

So, I restored the balance. I had a friend on the outside deliver a special cupcake to her house, chocolate fudge, her favourite. I had one, too; redemption tasted sweet.

I’m condemned to waltz the viscous floors of the Happy Shopper Super Box Store. I place the same items in the same places and see the same distorted faces as they fill their carts with crap. The Big Boss’ stench melts my nostrils from morning until night, his menace pricking up the hairs on my neck, forever—she is nowhere to be seen.

Today, I stand, like all days, and stock the shelves of my demons while I think of ways I can beat The Big Boss. It may well take an eternity, still, at least they serve cocktails in hell.