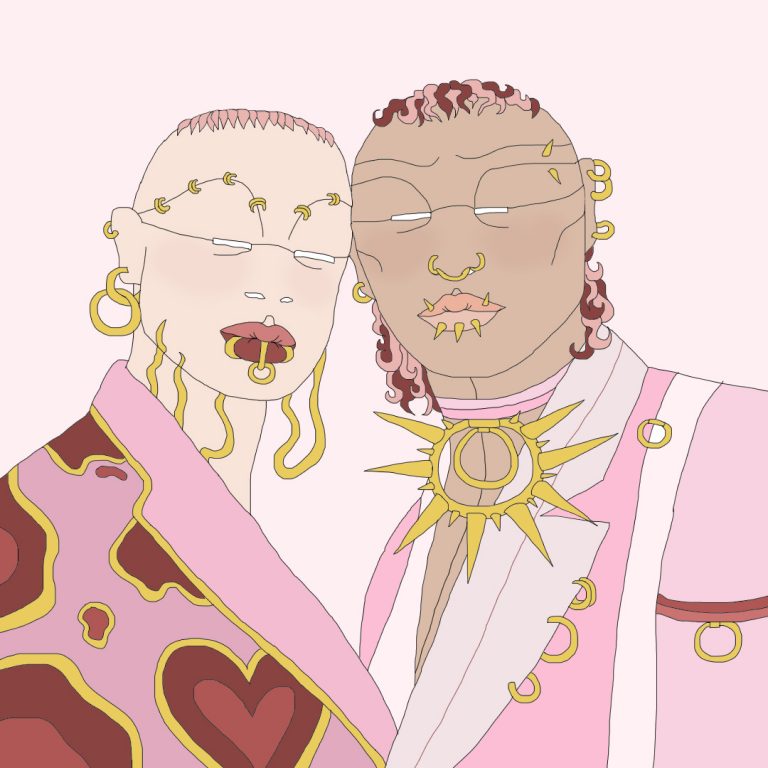 Journey Down The Rabbit Hole With Josefine Aspvik

On a Saturday night, when most people would be dancing in local bars and darkened clubs, you might find Josefine Aspvik casually learning a new language, adding to the plethora of talent they already possess. With an Instagram clad in pastel hues and a message never more critical, Aspvik provides their audience with a much needed political acid trip.

Art often issues an immediate reaction, a sudden feeling or evocation that affects your future perceptions of that artist’s vision. In the case of Aspvik, soft colour palettes combined with pointed piercings and contemporary patterns create a somewhat dystopian version of their characters.

“I like the contrast it brings,” says Aspvik concerning their chosen colour palette. Though pastels are nothing shocking to a millennial audience, having all of us once believed that the future was bathed in pastel glow, the true genius behind this colour palette is its ability to act as a security blanket.

“It kind of draws people in, and the closer you look, the more you’ll realise that my drawings go beyond visuals,” they continue. The colour story allows the audience to become enthralled while also absorbing the strong narrative arcs behind Aspvik’s art.

For many artists, and therefore most people, inspiration comes from their overlapping areas of interest. Art is often inspired by other iterations of artistic expression. Alexander McQueen was heavily inspired by contemporary art, while Japanese artist Takashi Murakami is often slated as the next Andy Warhol. “Artistically, I am very inspired by alternative fashion designers who do not gender their clothing,” Aspvik explains.

“I also find a lot of inspiration from my own mental health journey,” they continue, touching on the vulnerability expressed through their designs. In 2021, mental wellbeing encompasses a vast portion of our lives, and with it, the inherent need to feel better. Though no one claims to know the solution to the mental health pandemic, being creative is proven to aid in a better mental state.

The age-old tradition of using your own experiences as inspiration has served creatives for years. Writers tend to create work from their own trauma, while musicians compose music around their trauma. For Josefine, their art is a form of therapy, a cathartic experience that allows them to deal with feelings. When going through challenging moments, Josefine turns to their art, using trauma and conflicting emotions for inspiration.

In 2021, the intersection of technology and art has created a new breed of artists willing to tackle more significant issues. From the controversy surrounding a whitewashed facade of feminism to governments’ elaborate corruption, artists worldwide are shedding their own light onto problems close to their hearts. Josefine Aspvik is doing just that.

At first glance, their artwork appears to be editorial fashion wrapped up in a modern pastel bow, but should you fall down the rabbit hole, the meaning and message are far more profound. From the political discourse surrounding gender pronouns to a mental health message most people could relate to, Apvik’s art is universally understandable.

Art and political ideology have always been strange bedfellows. They often come into contact with each other, but their individual success is not directly linked.

For instance, Kenyan born artist Wangechi Mutu draws from the pressures and expectations surrounding women, gender constructs, and the environment. Her visceral depictions of the female form, combined with nature related anecdotes, challenges ideas of body image and our place in the world.

In countries where the dialogue surrounding cultural issues is often overlooked, art has always been a way to fight back, a tool in every activists arsenal. Pussy Riot, a performance group located in Moscow, has been challenging power since their formation in 2011. As outspoken allies for feminism and queer rights, they take political motivations and create something universally understandable. Art is not limited by language, but when applied correctly, they unpack problems we are all familiar with.

“It doesn’t have to be beautiful at all,” Josefine continues. “I also think that in today’s political climate, it is more than important to use your platforms to speak up.”

Arguably one of the most important political topics that Aspvik touches on is gender conventions. “For me, it just does not make sense why gender roles, norms, and beauty standards need to exist.” The characters depicted in Aspvik’s art are striking without a doubt, but their true power lies in their ability to push back on most societal norms. “There is no standard model,” Aspvik states about the body types they decide to display in their art.

Aspvik’s art is undeniably stunning, so why do we as a society continually oppress those who walk a similar path to those in the illustrations? Society shrugs off the identities of queer people, those displaying alternative fashion choices or beliefs can be made to feel outcasted and othered. Art offers the audience a look into the artist’s innermost feelings, and in Aspvik’s case, that is an experience of a person calling for change.