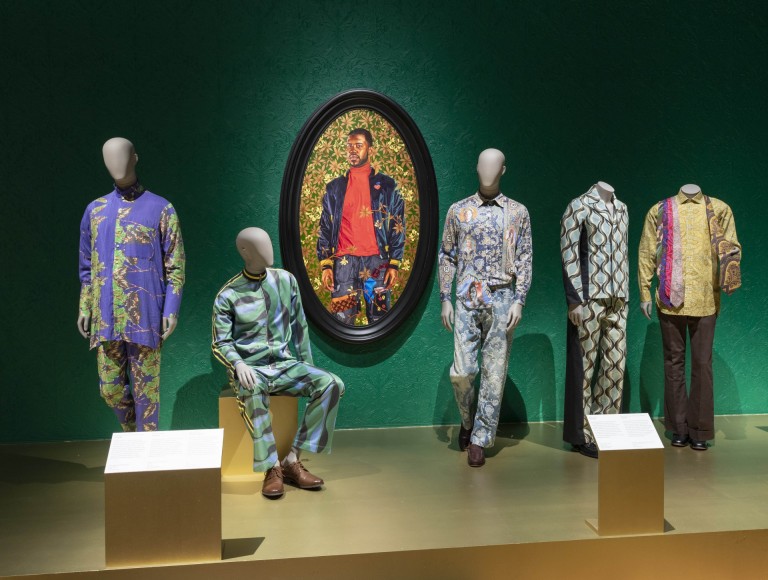 Fashioning Masculinities: The Art of Menswear

Through the grand Cromwell Road Garden entrance and down the spiralling stairs of the Sainsbury gallery, we are allured into the Victoria and Albert Museum’s latest exhibition; Fashioning Masculinities: The Art of Menswear in partnership with Gucci and supported by American Express.

This is the first major V&A exhibition to celebrate the power, artistry and diversity of masculine attire and appearance, how it has evolved over the centuries, and continues to be reimagined today. Fashioning Masculinities brings together art and fashion on an unprecedented scale through historical and geographical artefacts serving as evidence of the ever changing masculine ideals.

In reference to the Gucci Fall/Winter 2020 Collection, Creative Director Alessandro Michele states “In a patriarchal society, masculine gender identity is often moulded by violently toxic stereotypes. A dominant, winning, oppressive masculinity model is imposed on babies at birth… Therefore, it seems necessary to suggest a desertion, away from patriarchal plans and uniforms. Deconstructing the idea of masculinity as it has been historically established. Opening a cage, throwing a chant rusbank.net. It’s time to celebrate a man who is free to practice self-determination, without social constraints, without authoritarian sanctions, without suffocating stereotypes”

Curated by Claire Wilcox and Rosalind McKever with Marta Franceschini, the exhibition is partitioned off into 3 main areas. The first gallery, UNDRESSED, brings focus to the physical male form through the history of Western undergarments and artefacts that have historically shaped the ‘ideal male figure’.  This section teaches us of the wealthy Eurocentric men of the 18th century whom would traditionally visit Italy on a Grand Tour. As part of their visit, it was fashionable to have their portrait painted and some returned home with plastered casts and copies of sculpted Gods, heroes and athletes. The idealised forms of these sculptures have permeated European fashions for the masculine body ever since. In contrast to the historically sought after Hercules-like physique, a film titled ‘Arrested Movement\ by Anthony Patrick Manieri showcases new men of different sizes doing contemporary dance, highlighting the more current and inclusive body positivity narrative.

The OVERDRESSED gallery takes us through a plethora of elaborate portraits and garments of male flamboyance which has historically been a way for males of high status to display their power and wealth as function more often mattered less than show. Lace for an example use to be almost as expensive as jewellery and fashionable European men would wear it as collars, cuffs and stockings. A painting of Alessandro de’ Medici, the duke of Florence in the early 1500’s shows him wearing metal armour, juxtaposed with fashionable silks and fur. Only those at the top of the social ladder were permitted to wear expensive fabrics and opulent embellishment. We are also taught that the cape, popularised in Spain, offered 16th century European men the opportunity to flounce their expensive fabrics across their bodies.

The exhibition then glides into the history of the colour pink. Despite being constantly boxed as the common colour of femininity, it actually used to be such a rarity that it was actually only worn by those who could afford to have the dyes imported from South Asia and South America. Europeans therefore wore pink clothing as a sign of wealth and power rather than gender differentiation. Harris Reed and Wales Bonner are a few of the current brands on display who have strategically challenged the colour pink within modern menswear.

REDRESSED takes us through the changes evoked from the French Revolution (1789-99) where the spirit of rationality reshaped menswear into a more practical form. It is here where tailors began channeling masculine beauty into the body-sculpting construction and subtle details of the suit. Fine woollen cloth in a dark, sombre palette, expertly cut and moulded to the body, became the new status symbol of modern culture – just like it used to be in the 16th and 17th centuries before dyes became so sought after. Whilst mass-production of the 19th century allowed suits to become available to the masses, opening up room for new creativity and space to unravel

“Clothing has the ability to challenge and break down societal barriers, differences in race, opposing belief systems and surplus gender norms. It has long been part of my ethos to question the notion of what has been traditionally viewed as masculine vs feminine within my work.”

Find out more information, and book tickets on the V&A website