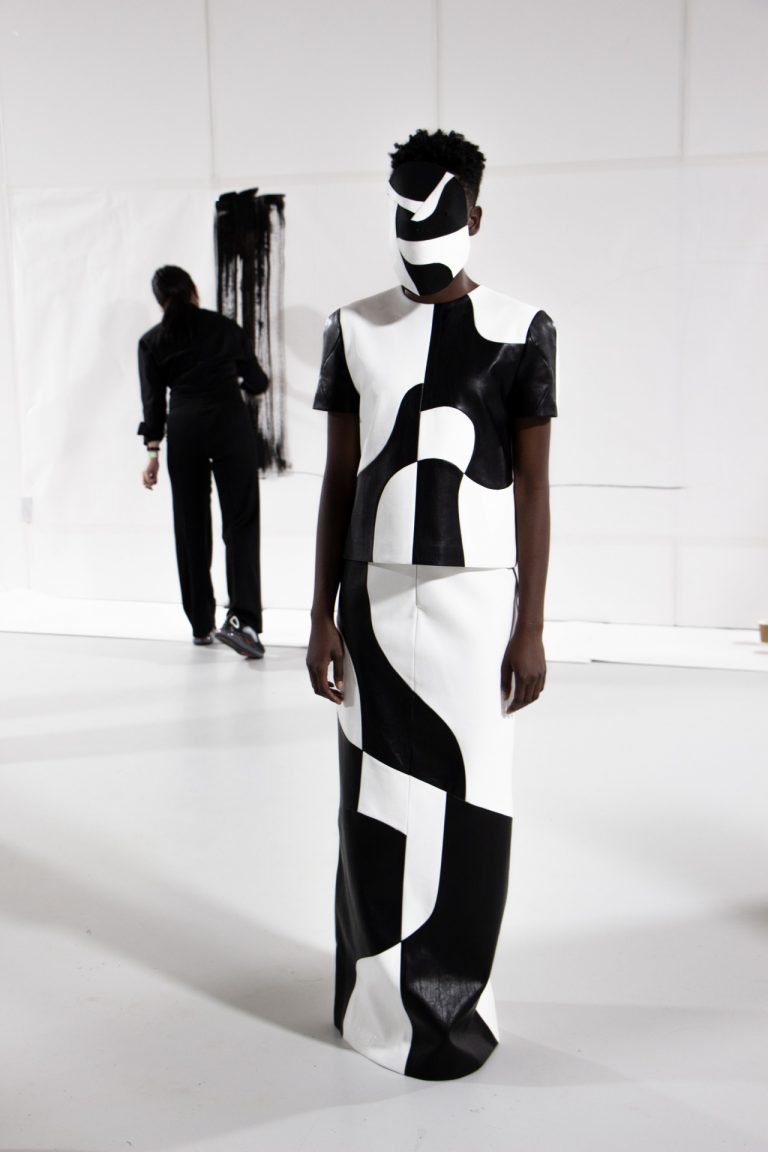 Due to travel restrictions and social distancing requirements, London Fashion Week looks different this year. The global pandemic has forced designers to get creative with how they present their collections. For LFW SS21, we’ve seen virtual runways, livestreams and films.

Korea-based womenswear label Hanacha Studio decided to take a look back the past with a retrospective film. The film included design inspiration, illustrations and clothing from the brand’s archives.

Launched in 2012 by Hana Cha, Hanacha Studio’s aesthetic merges art and fashion. Cha obtained her MA from London College of Fashion in 2012, earning the title ‘Women’s Collection of the Year 2012” from the V&A Museum. She holds a Ph.D. in Fashion Design from Seoul’s Hong-ik University.

The film, presented by Fashion Scout Digital, starts with flashing black-and-white words: “opposites,” “complexity,” “interdiscipline” and “creativity” are a few terms that pop up on the screen.

Each of Hanacha Studio’s collections is inspired by artists and design movements and named appropriately after. The aesthetic of merging art and fashion together stems from Cha’s obsession with complexity and simplicity, concepts she’s studied through sculptures, painting and nature.

According to a brand statement, Hanacha Studio’s design approach centers on  the “understanding of art reflecting her own respective and artistic language mixed with odd combinations.”

To understand Hanacha Studio’s aesthetic, it’s important to note that the nod to Bauhaus is a recurring theme in all of Cha’s collections. Bauhaus is a German art and design movement founded in the early 20th century that combined creativity with manufacturing. Art and architecture merged with functionality in this design style, defined by bold typography, color-blocking, geometric shapes, clean lines and primary colors. Cha has interpreted these abstract concepts onto clothing through consistent use of straight, minimalist silhouettes, red, yellow and cobalt blue fabrics, black-and-white color-blocked prints and stark metal embellishments.

Photos with works of the referenced artists flash quickly on the screen, followed by images and sketches of Hanacha Studio’s creative, contemporary clothing. In the collection images, the models’ faces are painted over with ovals in black and white, which appear like masks and coordinate with the garments. Many of the images also show the clothing alongside rectangular sculptures and in front of enlarged circle-and-square shapes pasted on the the walls.

We then see Cha speak, and she comes across articulately, describing herself as an ‘interdisciplinary designer and researcher.’ She then explains her designs, emphasizing her approach of merging fashion with value and simplicity with complexity. Her goal for the future is to continue creating seasonless, sustainable clothing. This forward-thinking approach is just starting to hit the fashion industry, but it’s clear Cha has been thinking this way since she started designing.

In this film, Hanacha Studio’s timeless, yet modern designs are presented in an exhibition-like manner for a unique experience that keenly shows Cha’s eye for concepts and her interdisciplinary “art-meets-fashion” approach. In our current world where many things feel uncertain (including the fashion industry’s future), a nod to the past with a forward-thinking mindset is a smart and effective way to take on fashion week.