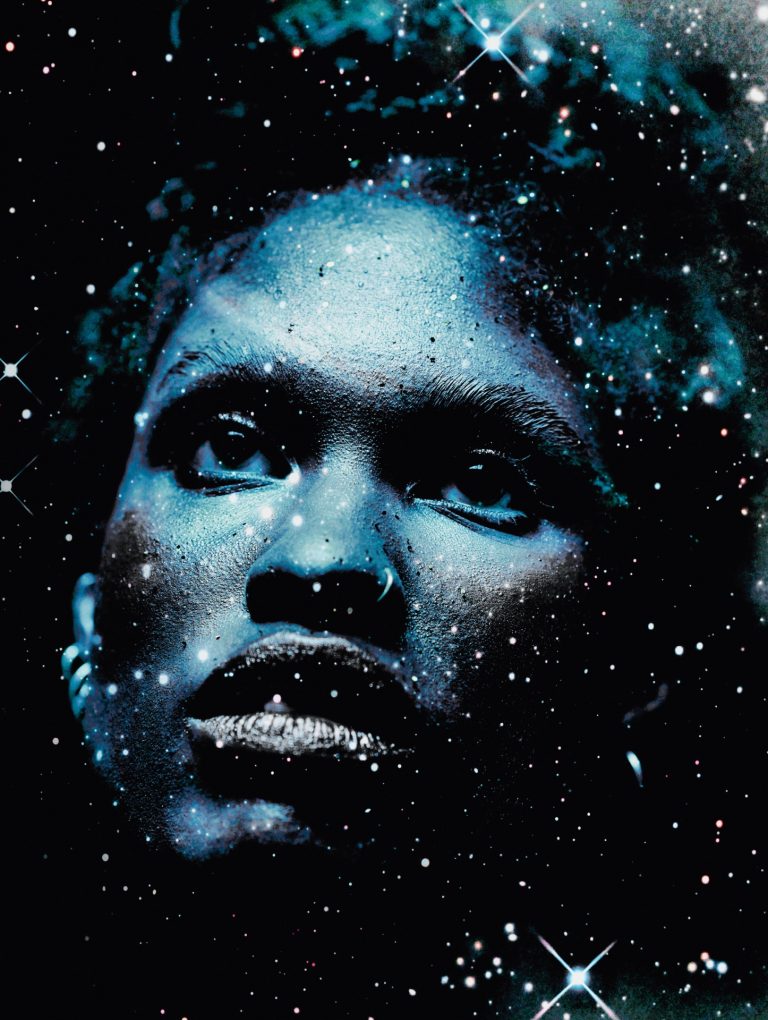 ‘Been spending a lot of time performing the necessary human actions required to keep myself alive, but not quite feeling like my feet are on the ground. Maybe that’s why I fall over as much as I do.’

The first issue of BBYTTH: Escaping Reality, created by music artist, designer and Depop seller Kenzie TTH, lands somewhere between an intimate self-portrait, a collection of thoughts and feelings, and a collaboration of work from designers, artists and photographers from around the world. Each piece in the magazine holds a very personal and sentimental quality while managing to obtain the overarching feeling of other worldliness. Directed entirely by Kenzie, she references ‘The BBYTTH World’ and the feeling she wants this to create. With the help of Louis Morlet of Emulsion Magazine and the support of Depop, Kenzie’s vision has come to life in a beautifully surreal piece.

Turning the first page of BBYTTH is like peeling back the glossy front cover of a dream, the reader quickly becomes lost in the belly of a hazy, satiric, wonderland. The magazine feels like something from the past and the future at once, capturing a kind of nostalgic quality while pushing forward and testing boundaries to create something new. A poem in all lower-case sprawls across the page with no punctuation, creating a kind of hypnotic rambling rhythm. Images with unfaltering surreal strength sit side by side, dark corners bleeding into visuals that look like something you might once have glimpsed in a dream that you can’t quite remember, or the despondent gaze of a model that you can’t place in time.

Breaking the mould of a traditional magazine, pieces of writing by Kenzie, Nicole Miglis and Tucker Bryant have no titles or introduction. The recollection of a dream spills out onto a double spread with no warning, emulating the feeling of finding yourself in one after being unaware you ever went to sleep. Stories are slipped in between the slick stream of editorials, scattered text in red, yellow and white illuminate short phrases of a relatable uneasiness. On a quick flick through, some pages appear as the kind of advertisement you would see in a traditional magazine, such as toothpaste, yet with a second glance blood ominously drips down the chin of the smiling model. However, any feeling of unease is quickly dispelled as once you turn the page, a renaissance-esque model floats across on a gloomy beach in peach ruffled chiffon, or sweet girls with horns and deep dark eyes are smiling in pretty white dresses and another feeling takes hold.

The idea of this zine originated from Kenzie’s idea of being like ‘an extended CD booklet of her musical outputs’ combining her music, art and creativity into one physical item, recognising that this is often lacking in today’s society with the absence of producing records or CDs like many artists used to.

Kenzie’s music, released under the name Kenzie TTH, has a dreamy, ethereal vibe with modern electronic influences. Even her recent release of the music video ‘Losing Sleep’ acts as an extension of the magazine, with hazy, multi framed scenes blurring into each other that gives the feeling of being in ‘The BBYTTH World’. In this sense, BBYTTH acts like a lifeline between the physical and digital world, linking the two together. Kenzie has also created an Instagram filter under the name ‘bbytth’ that can be used to create the illusion anyone is on the front cover, once again merging the boundaries between digital and physical experience.

Depop backed Kenzie in this project and gave her full creative control as they want to put emphasis on supporting their community and encouraging them to grow as creatives. They aim to play an important role in the reshaping of the fashion industry to become more sustainable, accessible and diverse. During this moment in time where digital storytelling is at the forefront of our community, especially for the younger generation, being able to hold a tangible product that spawned from an online platform and creator is almost shockingly personal.

Visit the BBYTTH store on Depop