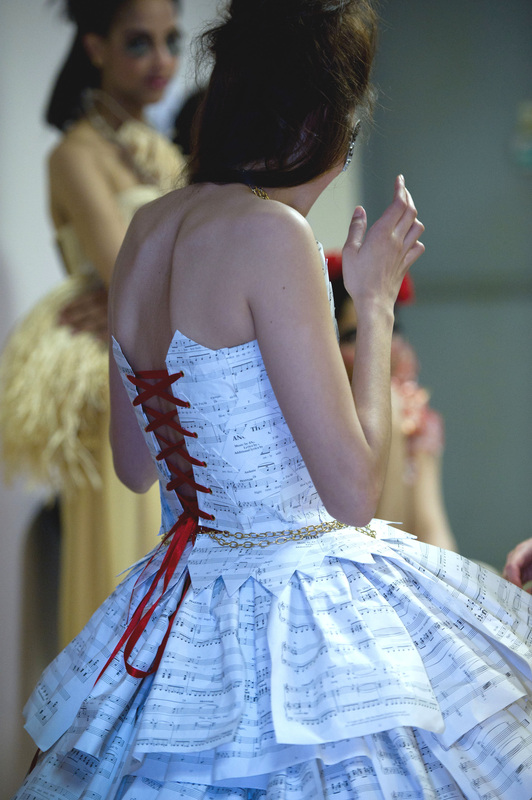 Based in the elegant setting of the Pullman hotel eleven young designers showcased a range of unique designs. The combination of statement pieces influenced by each designers’ personality, varying between haute couture and ready to wear pieces, perfectly embodied the driving concepts behind each design.

Offering one of the most contemporary designs of the collection, Dimitar Milchev, presented a pure white fitted jumpsuit, built upon by the incorporation of metallic blue tassels, accentuating and adding detail to each shoulder. Discussing the minimalist concept behind his creation, the designer of three years credited Givenchy as an influence that added to the couture nature of the design. Winning third place in the category for ‘Best Young Designer’ commenting on his design Milchev stated “I am definitely aiming for celebrities to wear my designs, even in their music videos someday”.

Another designer bringing a modern elegance to the collection was Amandine Cole, combining the contemporary with an elegant flare of simplicity. Cole’s design consisted of a cream co-ord, built up of a sharp tailored blazer, the baggy cropped trousers paired, added a relaxed element to the design. Further building on the design the metallic silver details incorporated through the headband, shoes and lining of the blazer brought an edgy element to the design, bringing the cream co-ord from dated to current.

Displaying an abundance of originality and innovation through his designs, Fraser Miller added to the collection, presenting a colourful knit based design, influenced by the clean lines and impeccable preciseness of Danish architecture. As one of 10 siblings, Miller incorporated the idea of hand me downs into the design representing the originality and personal style of an individual. “We got so many clothes passed down to us, I wanted to change them and make a piece my own,”. After winning the ‘Visionary Knit Wear’ award at Graduate Fashion week, aiming for the runways of London and Paris fashion week, the Scottish designer to watch aims to create his own brand in the coming years.

Displaying a variety of inspiration and vision through the designs presented, the Young Designer Awards showcased the future talents of the fashion industry highlighting a range of designers whose creations may be walking the runways of London Fashion Week in the coming years.