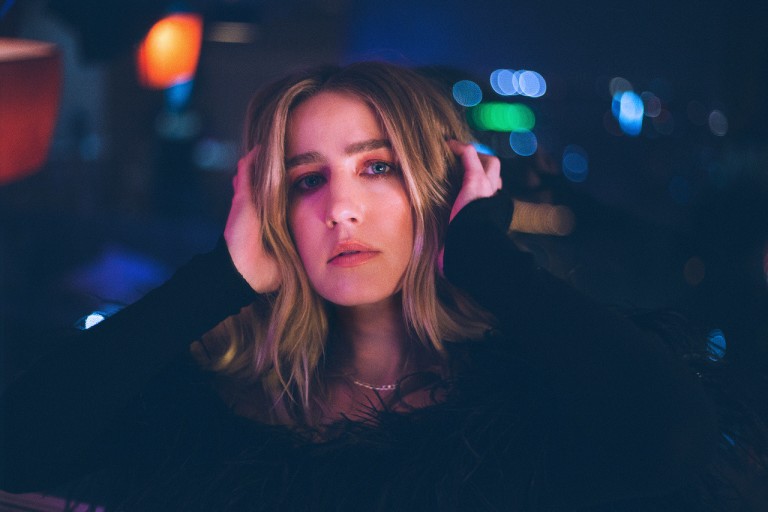 American singer-songwriter, Ingrid Andress, turned more than just a few heads in 2020 when she released her debut album Lady Like. It was a project that earned the artist three GRAMMY award nominations, and thousands of new fans across the globe. Now Ingrid teases her next LP with the single ‘Seeing Someone Else’, an emotionally charged track that highlights the complexities and consequences that arise with self-growth and evolution. It also showcased a noticeable change in sound, stepping away from a largely acoustically led aesthetic to one where the glistening production is now a key focus, helping to push the message further.

‘Seeing Someone Else’ arrives alongside a retro infused music video that translates Ingrid’s sense of self-reflection. Illuminated nighttime cityscapes and dive bars set the tone, whilst a mirage of dark and grainy VHS footage takes the viewer on a journey of self-awareness, towards independence – a moment achieved at the end when she is watching the visuals back. It’s a powerful piece that will resonate with many who’ve found themselves in similar positions. Such relatability has always been one of Ingrid’s strongest assets, alongside a fearless lyrical approach in sharing her most vulnerable moments.

‘Seeing Someone Else’ is the perfect display of Ingrid’s evolution as an artist and her fans are in for a treat when her album drops. It’s a project that really enticed us, and we just had to speak to the artist about it. Below, we chatted to Ingrid about the power of introspective songwriting, the story behind her new single, and how the track reflects what’s set to come on her sophomore LP.

Hey Ingrid! Thanks for speaking with us today. Can you tell us a little about how your love music came about? What originally inspired you to venture into the industry?

I didn’t start creating my own music until I was in high school. I started learning how to play the piano when I was 5 or 6, but I really needed an outlet for my thoughts and emotions when I switched from being homeschooled to public high school, so that’s when I started writing songs. Once I started writing, I realized that it was the only thing I wanted to spend my time doing, so it sort of snow-balled from there. Not a ton of inspiration other than me realizing it was the one thing I could do for hours without wanting to stop.

Within the three years you’ve officially been releasing music you’ve achieved a lot, including three Grammy nominations for your debut album, Lady Like. Has the speed in which your music has taken off been somewhat surreal?

Yes, and no? It’s all been a little surreal to be honest. But also a lot of hard work. Releasing your first album at the beginning of a global pandemic is not something I ever thought would happen to anyone, or me, so there were a lot of dark moments that accompanied the light ones. I suppose that’s how life works for everyone though at the end of the day! All I know is that I am forever grateful for my fans and my team for keeping things moving and making me feel like things were still happening while the world stood still.

You’ve just released your latest single, ‘Seeing Someone Else’, a deeply emotive track that focuses on the consequences that arise with self-growth and evolution. What drove you to focus on such a subject?

The pandemic gave me the opportunity to step back and really look at who I was as a person. It’s so easy to get caught up and distracted with everything going on as a new artist, so this was the first time in a while that I got to be like “Ok, where am I at, and am I happy?” The answer was “no,” so I started unwrapping the layers of where the unhappiness was stemming from, and it turned out to be the relationship I was in for 6 years. I had grown and changed so much but I didn’t even notice because the person I was with was keeping me down at their level. It happens to even the strongest of us, and once I saw it, I couldn’t unsee it. I wrote this song pretty much right after I realized it was time to move on.

It adds to a back catalogue of uniquely introspective singles that show you to be an accomplished songwriter. Is this an area in which you feel truly comfortable?

Definitely the most comfortable. There is nothing quite like the high I get after writing a song that I know hits hard emotionally and tells a story. I got into music because of songwriting, so I think I will forever be in love with the process of narrating the emotions and life situations we all experience in our own way. Songwriting reminds us that we all have more in common than what we think.

‘Seeing Someone Else’ also arrives with a music video that contains a mirage of dark and grainy VHS footage. It shows you undertake a journey and by the end you achieve self-acceptance and independence. What influenced this visual story?

I wanted the visual to be raw and gritty, just like the story in the song. It’s vulnerable, but it’s also a bit frustrating and liberating at the same time. The version of me in the video is meant to portray the “old” me. Staying out late, wild and free but also discontent with the situations I put myself in. By the end of the video, I am ready to move on from that chapter in my life. As far as what I was influenced by, I am a punk girl at heart, so I loved the throw-back vibe of the VHS. Sort of like a nostalgic nod to simpler times.

This release is also the second single to land from your upcoming sophomore album, can we expect a similar aesthetic on that project?

You sure can! The visuals of this second album are going to be equally as important to telling the stories as the music. I’m definitely exploring new territory, both visually and sonically, on this next project and am so excited for people to see what I’ve been putting together for basically the past 2 years.

How would you say what you’re creating now is different from the last album? The production seems to transmit more energy than previously. Is that intentional?

Yes, the production is definitely a little different on this next album than what I’ve done before. I think I’ve grown a lot as a producer, so I wanted to push the envelope as a musician even more when it came to instruments, effects, etc. My goal is to always get better and learn something new about myself and music with every album, so this one is more about showing all the different dynamics I have as an artist.

A couple of weeks ago you performed ‘Good Person’ live on The Tonight Show Starring Jimmy Fallon. How did you find such an experience?

It was my first time playing Fallon so I was pretty excited! It was nice to launch the new chapter of my music on a show that I love so much. The Roots are the house band for that show, so I had a lot of fun watching them play and definitely fan-girled a little bit.

When can fans expect to see you perform the new album live?

So soon! I’ve been adding some new songs in my set list here and there to start testing them out with my band, so I’ll probably start playing most of the record by the second part of the Keith Urban tour.

What else do you have planned for the rest of the year?

The Keith Urban tour! I’ll be on the road with him for pretty much the rest of the year, as well as getting everything ready for when the album comes out. I’m sure I’ll do some writing while I’m out on the road as well, but mostly just excited to hang and play music and travel. The best part of being a musician is getting to sing with all your fans in different parts of the world, so I plan on doing that and having a kickass time.