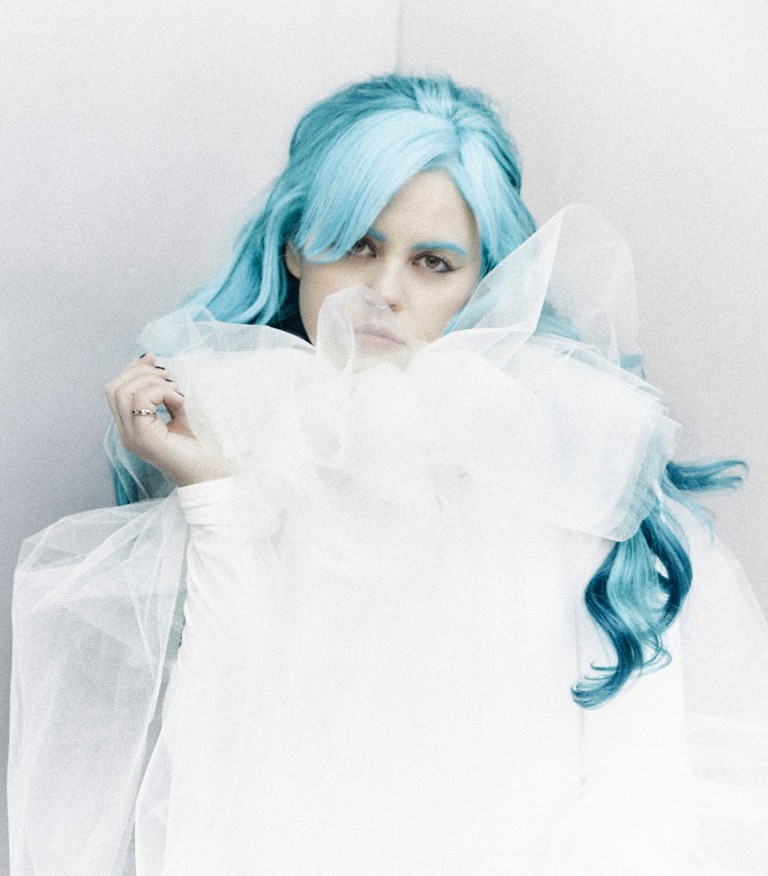 The first time listening to ‘I’m Getting Tired Of Me’ by Kings Elliot, there was an instant feeling of overwhelming excitement and admiration, thinking, ‘she will be huge, more than huge.’ Two years later, the half Swiss, half British singer/songwriter released her sophomore EP ‘Bored Of The Circus.’

Even though Kings Elliot is only at the beginning of what will be an astonishing career, it’s always gratifying to see someone you have been a fan of since day one to accomplish what they deserve. In the case of Kings Elliot, she represents the bravery and strength of the new generation.

With her signature blue hair color, Kings Elliot is letting everyone know she’s free and ready to handle whatever comes at her. She’s been described quite a few times as one of the most promising names to come out of alt pop up-and-comers. She is a prime example of someone who built the courage to remove their facade and start becoming someone they always wanted to be.

Consistently narrating her internal torment and outlining knotty emotions, she promotes vulnerability and acceptance of one’s issues that carry the power to institute open conversations. Elliot’s stand-out tracK ‘Cry Baby Cry’ is an urgent existential cry for help for letting people feel what they need to feel.

‘Cry Baby Cry’ will be a pivotal record in Elliot’s career as she attacks the generational response of ‘hush’ and ‘don’t cry’ that pushes people to suffer in silence. This anti-lullaby gives center stage to Kings Elliot’s sensational vocal performance.

While you momentarily delve into the sphere of Kings Elliot’s artistry, you can listen to ‘Bored Of The Circus’ out now.

Could you please share and elaborate on how you got into music in the first place?

I think I got into music when I was like 7 years old and discovered Lucky by Britney Spears!! I remember asking my mum what this magical thing was, I was so mind-blown by it haha! Queen was on all the time because my Mum loved them so much, and I am massively influenced to this day by their vocal arrangements and songwriting.

Why do you think you don’t hold back when it comes to your vulnerable songwriting?

I think it’s because I couldn’t bear continuing my life any other way. I’ve held back for a lot of my early life because I was ashamed. Now I feel like I’m making up for those times.

Is it therapeutic for you as well?

100%. This is the main reason I even started writing songs and singing them. It’s my number one way to cope.

You were born in Switzerland, why did you move to London?

I wanted to remove myself from my roots, from the need to hold up a facade that I no longer had the desire to maintain. I wanted to start fresh as the person who I am and not who I felt I needed to be and I could only do that by leaving the nest.

How do you think London as a city affects you and your music?

At first it just made me more insecure, because I met so many talented musicians and realised that I wasn’t on their level. It’s also much more widely accepted here that being an artist or a songwriter is a job! So my dreams felt reinforced, I just had to get way better at it, and so I did.

What are some of your favourite things about London?

My favourite thing about London is its diversity, creativity and vibrance and also Richmond Park, deers everywhere, my safe haven where I always go when I have a down day.

Is there a story behind your signature blue hair?

I dyed my hair blue when I needed courage to release my first song ‘I’m Getting Tired Of Me’. The colour represents freedom and true expression, and that was exactly what I was looking for.

You’ve been touring with Imagine Dragons & Macklemore, how has it been?

It’s been absolutely surreal. I can’t even fathom that the last 6 weeks happened and it’s almost over. They have been nothing but supportive towards me and I appreciate them so much for taking a chance on me.

How do you feel when performing on the stage in front of thousands of people?

The first few shows I had a really hard time getting on stage because I was filled with so much fear and surviving the show was the only thing on my mind. Now I can finally enjoy it. The Dragons fans are so supportive, some of them would turn up with ‘sick puppy’ signs and I’ve felt nothing but love up there and I’m so grateful for that.

Do you have any rituals before live shows?

I’m very chaotic, so currently every single day is different to be honest!

Your upcoming EP ‘Bored Of The Circus’ is out now, what is the backstory behind the title?

By the circus I mean what goes on in my mind. It’s a lot to process and sometimes I’m tired of it, tired of feeling so much all the time.

What would you say is the prevailing theme of this EP?

While the struggle with my mind is a thread that goes through the whole EP, it’s also acceptance because fighting yourself is very tiring.

Your single ‘Cry Baby Cry’ is absolutely beautiful, would you mind elaborating on what this song means to you and what inspired it?

I wrote this song as a letter to my 14 year old self. It’s something she desperately needed to hear, and to this day I still need to be reminded. Nobody should be ashamed of the way their mind works, to have emotions, to express them openly. Growing up we’re always told “don’t cry” and to “hush”, but often this leads to emotions emerging in more harmful, destructive ways! So I wrote this as a kind of anti-lullaby, for everyone and for me, to remind us to not suffer in silence.”

What would be some of your dream collaborations?

It’s not a musical artist, but I’m obsessed with the Zelda series, and when I saw they had a new game coming out the only thing I could think about, other than how excited I am to play it, is that I’d love love love to do something with the game. Anything, a song in the game, one of those things I’ve seen artists doing lately where they become characters in the game, have a world in it. Anything.

When you close your eyes, where do you see yourself in your day dreams?

In my daydreams I see myself selling out arenas!!! I know that’s a long, long way away, if ever! But it’s something I’ve dreamed of since I was a little girl, so I’ll just keep going!