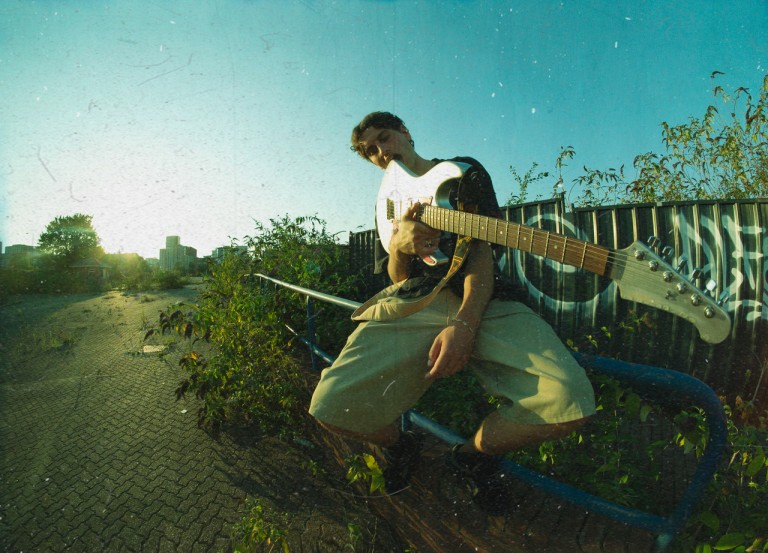 London-based Mancunian musician JAXN has been establishing a following on TikTok, with over 1.1 million likes. Engaged in transporting the ’90s atmosphere to the twenty-first century, JAXN has received praise for tracks that echo the sounds of Britpop as well as American radio rock of the time – and he now unleashes a new single.

Created with fellow Manchester artist Mattu, ‘Foolin’ Around’ combines all of the elements of the time’s pop-punk and hip-hop: chugging guitar riffs, lively rhythms, scratching, and an instantly irresistible song. While the song sends you to a 1999 skatepark in California, it is complemented by JAXN’s current British humour.

As a songwriter, producer, and musician, JAXN channels the visual style of the 90s era for this song’s artwork. Its photos were recorded on an old school camera before he passed them through an old box television and digitally eliminated the white noise.

With London shows booked up for the end of September and added dates for Leeds and Middlesborough in October, JAXN has a busy schedule ahead and has an eager fan base waiting to experience his music.

Noctis Magazine speaks with JAXN to learn more about the artist’s career, creative inspirations, and we find out more about the current tune ‘Foolin’ Around.’

I was given a Bass Guitar for Christmas at an early age, I then fell in love with learning how to play all the traditional band instruments. It was kick-started there, more of an obsession than anything. I have always wanted to be able to play and write music, not necessarily a music career, I guess that will come hand in hand if all goes well.

Your music is said to echo the sounds of Britpop as well as American radio rock, can you elaborate on this and the sound you create?

I guess it boils down to my tastes as a child, I was constantly experimenting with the two flavours. I would obsess over British bands like ‘The Cure’, ‘Blur’, ’The Verve’ and later storytellers like ‘Jamie T’ that would really speak to me in a way I understood. I’d then quickly switch it up and dive into my imagination whilst listening to bands like Red Hot Chili Peppers and all the nostalgic American Rock you’d find flicking through MTV.

And, what inspires your music? Personal memories, art, etc.

Aside from my tastes as a youngster, my Music is just inspired by feelings. I just like writing songs that make me feel a certain way when I’m walking down the street or daydreaming, if it makes me stick my chest out or feel a little more confident than usual that’s normally when I want to release it.

You have just released a new single called ‘Foolin’ Around’ with fellow Manchester artist Mattu. Why did you decide to collaborate with Mattu?

When I met Mattu, it became clear really quickly how much our tastes in early 2000s rock and alt-rock overlapped. I think we spent a few days geeking out and then decided to write our own song.

And what inspired the theme and lyrics in ‘Foolin’ Around’?

I was walking through Manchester town centre and heard a guy tell his girlfriend to stop ‘Foolin’ Around’ with loads of emphasis on the ‘ooo’s’… it made me laugh man, so I put the phrase into my notes, not knowing at this stage how and when it would be used. When I eventually sat down with Mattu, I thought it’d be the perfect phrase to coin. The rest of the song was kind of built around the theme of someone messing you about and essentially foooooolin around.

How do you want people to feel when listening to the track?

Upbeat, feel good with a hint of teen rom-com nostalgia, excited to show their best mate the new song they just found.

The single artwork was created by yourself in a cool process, can you explain what you did here?

We shot the artwork on some steps in an industrial park in Manchester. We used an old skate camera and I spent the best part of 2 hours bunny hopping this fence whilst my guitar was precariously balanced below my feet until we got the shot. I then used an old TV I found on Gumtree to run the video through, then took the images from there I added some handwritten calligraphy, tweaked the colours and started to piece together the design.

Do you think it’s important for other artists to explore creating their own artwork? And why?

I do, very much so. I think it’s difficult to present an organic vision straight from your brain if someone else’s creative brain is at play. I think collaboration is an amazing tool and works for a lot of people but I think if you have a clear vision and the tools to execute it, the best way to really solidify your vision is doing it, DIY baby.

How would you like your music to develop, even more, over the next couple of years?

I’m keen to raise the bar. The type of songs that live on big old arena stages and will be played at a BBQ in 50 years’ time. I want to create anthems that feel like you’ve known them all your life.