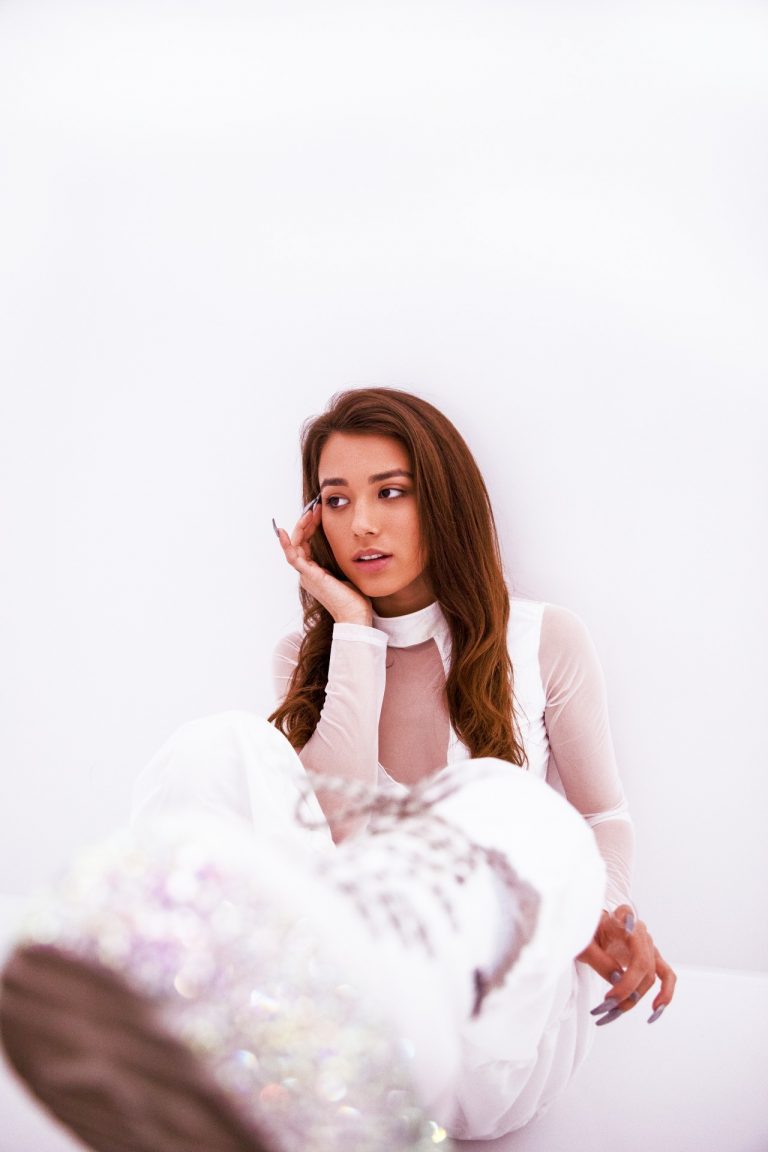 “I decided to be happy and follow my dreams,” says Alaina Castillo in her Spotify bio. It’s no surprise artists usually enjoy self-loathing, so it’s refreshing to see Alaina allowing herself to be happy and leaves her shy personality behind whenever her pen touches the paper.

Hailing from Houston, Texas, the 19-year-old beauty Alaina Castillo comes out with not one but two EPs ‘the voicenotes’ and a Spanish version ‘mensajes de voz’. This bilingual singer/songwriter currently based in Los Angeles combines her Latin roots with her passion for R&B, Pop, and Hip-Hop. We dive a bit deeper into what inspires her work, the lyrics she’s especially fond of, and shares a list of the ultimate vibe songs.

“I think I’m pretty shy at first, but after I warm up to someone or a situation, then the weird Alaina comes out,” Alaina admits as she introduces herself. “My music has a mix of the shy girl vibes but also incorporates different sounds to create something that is vibey, fun, or something that someone needs to hear at that moment. I think it’s a combination of R&B, pop, Latin, and sometimes a little alternative as well”, she adds.

As children, we tend to dream big, fairy dust, and all. We dream of being pop stars, astronauts, superheroes, but for some, it actually comes true. Alaina Castillo explains how she made her dream, her reality: “My mom sang in the church choir, so she signed me up for my own choir whenever she could, then when I joined the choir in middle school, I just felt so connected to music. It made me feel like I had something to put all my time into like it was meant for me. In high school, I was at a really low point in my life and decided to turn what I thought was just a dream of mine into reality”.

During Alaina’s first year of college, she decided to upgrade from uploading covers on Youtube to making something on her own: “I’ve always been writing my own music in little diaries my mom gave me or just random books I could find, but the first song that I produced and wrote was in my first year of college. I had been doing YouTube covers and wanted to make my own song, so I decided to make a really simple loop on GarageBand and sing over it. I remember putting it on YouTube and feeling so proud because I knew that was what I wanted to keep doing, and my fans were all so receptive and nice to the song”, she elaborates.

Taking inspiration from the GOATS like Elvis Presley, Whitney Houston, Rihanna, and Adele, Alaina does not shy away from getting personal with her music. As my favorite song is ‘i don’t think i love you anymore’ Alaina uncovers what it’s about: “This song was written at a time when I hit a wall with love and didn’t know if I should keep trying or give up. I’m a hopeless romantic, so I’ll continue to think the best of someone even if that’s not what they’re showing me, but after enduring that for so long, I didn’t know what I was fighting for anymore. It was kind of me coming to terms with the fact that the memories I had of this person might not ever happen again, and I had to start thinking of myself and my happiness”, she reveals as she opens her heart even more.

For the sake of her artistry, Alaina exercises emotional vulnerability with her music. In 2019, she released her debut EP “’antisocial butterfly’”, and earlier this year, she presented a new EP ‘the voicenotes.’ Alaina compares these two projects in terms of growth and messages: “‘antisocial butterfly’ was a statement of my style and my music because I was learning how to make songs that spoke about who I was a person. But ‘the voicenotes’ EP is taking everything that I’ve learned from writing and using it to talk about my problems, my life and how I try to overcome those things or how I fail at it. ‘the voicenotes’ is much more vulnerable because it’s going through the thoughts in my head as each of these personal things is happening.”

With her newest body of work, Alaina utilized smartphone’s app of voice memos as a way of capturing the rawest emotion: “The idea behind titling it ‘the voicenotes’ came from all the moments where I would think of something or get an idea from a situation that had just happened and then take out my phone and record it. It’s basically a fresh thought before you have time to think about it or change it to be what other people want”, she explains and pushes for authenticity as the number one priority.

Creating something that is as raw as ‘the voicenotes’, Alaina also fought for making relatable music that would speak to people and act as an escape: “I want it to help them. Everyone goes through their own problems but sometimes it’s hard finding ways to move on or forgive the past, so I wanted to create something that could be a message for myself but also for anyone who needs it. Music can change moods within seconds because you’re able to relate to the sound or the lyrics, so I wanted to be able to make people feel as if they could escape by listening to music that hopefully helps with that”.

Making her Latin roots proud, Alaina releases a Spanish versioan of ‘the voicenotes’ – ‘mensajes de voz’. As a bilingual artist, we asked what is her favorite lyric in both languages:”In ‘sad girl’, one of the lyrics at the start is, “blood orange flooding the bay, oh what a fruitless escape,” and that’s been one of my favorite lyrics since we first started making the EP. But in ‘triste como yo’, the first sentence is my favorite: “llega la luna por fin, el cielo pinta de griz,” (the moon finally arrives, the sky is painted of grey) and I love the imagery that’s created by that line”, she tells.

You can also have a look at Alaina’s latest music video for ‘no vuelvas a mirar atrás’.

For all her die hard fans, Alaina Castillo lists her ultimate vibe songs that you can now listen to here: