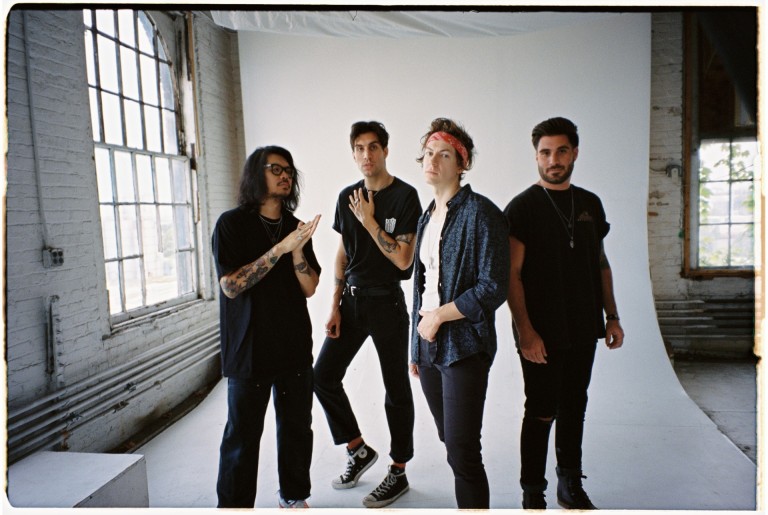 Throughout the nine years that Young Rising Sons have been creating music as a band, they’ve been key players in the development of the American indie-pop sound. For Andy Tongren, Julian Dimagiba, Max Iantorno, and Steve Patrick, it’s been a wild ride that’s consisted of emphatic highs, and exhausting lows. Such a journey can be heard on their long-awaited debut album Still Point In A Turning World, which is deeply emotive and personal from start to finish. Across 11 tracks, the band put an emphasis on the inability to affect the past, instead focussing on the aspect of hope, and a promising future.

It marks a monumental moment for the band and serves a culmination of over a decade’s worth of devotion to their artform. Digging deep into previously unexplored territory, Young Rising Sons show just how far they’ve come since they arrived on the scene in their early 20’s, showcasing an honest songwriting style that pulls no punches, and ultimately displays how the band has matured over the years. Featuring hits ‘Good Days’, ‘In My Room’, and ‘Carousel’, the album traverses through the sounds of indie-pop and alt-rock which sounds equally nostalgic as it does catchy.

Expectations for the band have always been high, personified by the fact they were hand chosen to tour with the 1975 a few years back. They signed with Interscope records in 2013 in a move that didn’t quite suit both parties and proceeded to leave in 2017. After such a move the band chose to take a hiatus a year later to find themselves and inspiration once again. Once they started releasing independently in 2020, hyper has steadily built, and Still Point In A Turning World arrives with the band riding a wave of momentum.

Tying in with the release of the album, we spoke to lead singer Andy Tongren about their journey to date, the inspiration behind the album, and what we can expect to come from Young Rising Sons next.

Hey Andy, thanks for taking the time to speak to us today. How did you guys come together to form Young Rising Sons? How would you describe your early sound?

We’ve been playing together for nearly 10 years at this point.  Steve & Julian met in high school and started a band, I met them at an open mic in the east village in NYC, and we were in similar social circles with Max.  We needed a guitarist, had him play one show with us and the rest is history.  We instantly became best friends first, bandmates second.

We’ve never been a band that has tried to chase trends, so our music hasn’t changed that drastically, but I think our songwriting has matured and evolved as we’ve experienced life.

When you first arrived on the scene there were big expectations placed on your shoulders. Within a year you toured with the 1975 and were on my ‘ones to watch’ lists. How did affect you so early on?

I think we thrive under pressure. In Montreal the day before the 1975 tour began our van was robbed – we lost our passports, our band computer, and a lot more. We learned pretty quickly that what’s going to happen is going to happen, all we can do is control what’s within our control.

I think it makes people feel comfortable to define things clearly and put them in boxes, but at the end of the day we realized that if we want to write honest songs, we can only be our true authentic selves. And watching people connect with that is the most rewarding part of what we do.

You’ve been releasing music together for 9 years and have been a band even longer. How has the dynamic changed during that time?

It’s certainly ebbed and flowed to say the least. The production process is probably what has seen the most change. Up until 2 years ago everything we released was produced by folks outside of the band. We’ve become a bit more insular & flexible in our workflow, producing everything mostly on our own – it’s more work but also allows us to see any creative visions we have fully through.

I think it’s sometimes easy to become jaded and bitter in the music industry but being best friends has allowed us to keep each other in check. We act as a support system for one another and are constantly reminded of how special it is that we get to do what we do.

You went on a 2-year hiatus in 2018, what was the cause for this and how did it feel to come back together in 2020 to make music once again?

Young Rising Sons has always been about finding the silver linings & the lessons within the darkness of the world. In 2018 our songwriting shifted, and we found it difficult to find that the light that made Young Rising Sons special to us, so we decided perhaps we needed some time away from it.

In 2019 when the world came to a grinding halt, we found ourselves stuck at home writing songs over Zoom.  In those moments of adversity, we started to write songs that felt inspiring to us. And despite the state of the world, we began to rediscover what Young Rising Sons was always about – finding those silver linings.

Recently you released your debut album Still Point In A Turning World, what was the inspiration behind the release?

This record has been a long time coming. As a band that waited nearly 10 years to put out a ‘debut album,’ the inspiration behind it is a little bit of everything. Throughout our journey we’ve had many highs and many lows, and too many of them we failed to appreciate in the moment because we were focusing on what was next. Still Point In A Turning World is our aide-memoire for us to truly exist in those moments and embrace the present.

Throughout the album you convey stories that are deeply introspective, was this an intentional approach or did the songs naturally build in this manner?

Being inquisitive of myself has helped me to learn and grow as an individual – and doing the same as a band has helped us to define who are and allowed us to work toward what we want to be. There are moments when it calls to be overly precious with a lyric, and moments when excessive analysis kills any creativity.  We try to tow that line. It’s important for us for our music to have a lot of depth, but also know it’s something that can’t be forced. We’ve learned to let songs be what they want to be.

Why do you think it took you guys so long to release an album? At what point did you finally feel ready to put 11 tracks together and tell a full story?

When we started playing music, we promised ourselves we wouldn’t become the ‘EP band.’  At some point due to circumstance, a lot of it out of our control, the option to put out an album just began to fade, and we broke that promise to ourselves. However, had we put out an album years ago I fear that it would have felt contrived and unorganized. In a strange backward way, I’m glad we waited until now, because we were able to present the most honest, authentic version of ourselves and do it in our own way.

Do you think Still Point In A Turning World presents a new Young Rising Sons, or does it sum up all your years together in one complete body of work?

I think it does a little bit of both. Our goal was to sonically encapsulate our time together as a band up to this point, but also leave a few doors open for growth. There are a few things on this record that hint at what’s to come from us moving forward.

You’re passionate about being truly honest within your output, defining the unpredictability of life as being a key factor in where you are today. What role do you think it plays in your sound?

The understanding of the unpredictable nature of life is something that, at the risk of sounding cliche, can set you free. The moment we realize how many things we have little to no control over, we can begin to focus on the things that are in our control. That’s been very inherent on the production end in particular, and we’ve learned to lean into the things we are good at.

How important has the essence of adversity been to your development? It’s widely known you left Interscope records in 2017, how do these highs and lows help push you forward?

Adversity has been everything for us. Of course, the moments where life feels draining and it seems like you’re repeatedly running into a brick wall aren’t the most glamorous – but they’ve defined us and taught us so much. Our failures have become just as much the fabric of Young Rising Sons as our successes.

What advice would you give to young bands who now find themselves in a position like yourselves were when starting out? Is there anything you would have done differently?

Keep going. There will be moments where you feel dejected and down and want to quit, but if this is what you’re truly supposed to be doing – quitting isn’t an option. Knowing what we know now, sure, there are moments that I might navigate differently, however I don’t think any of us regret our path – it’s given us some pretty important perspective. Without that I don’t think we’d be writing the songs we’re writing now.

We’re hoping to get out and tour the record. While we absolutely want to give this record a moment, we do also have a wealth of new music we’re excited to eventually begin to roll out.