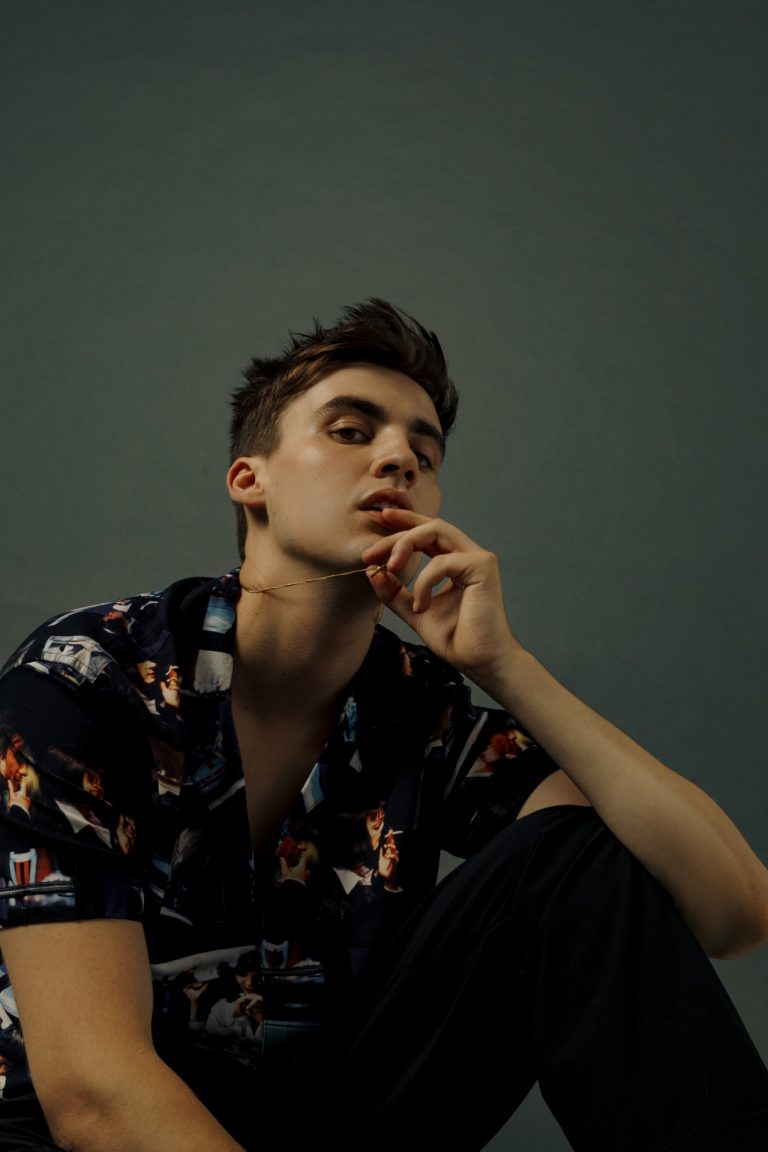 Just before his last show as a supporting act for The Vamps, JC Stewart opens up about the difficulties of isolation, his VMA nomination, and his new single, ‘Don’t Say You Love Me.’ “I’m playing at the O2 Academy in Sheffield tonight as part of The Vamps tour. It’s been so unreal to be back playing live”, says the Northern Irish singer/songwriter.

JC Stewart navigates through the irreversible effects of broken heart, love, and friendship as ‘a professional sad boy’. Instead of chaotic traverse through the confusing emotion of commitment, Stewart perceives a sense of tranquility within letting it all out. The newest single, ‘Don’t Say You Love Me,’ sees right through all the ‘I love you’s’, when it’s time to part ways.

When 2020 took the ability to perform away from him, Stewart experienced huge ups and downs, but now he admits there was a silver lining at the end. To fill the void, he showcased a new side of him and made a quarantine-themed version of the ‘Friends’ theme song that even caught the attention of Jennifer Aniston.

JC Stewart lets us inside his green room and touches upon his upcoming new second EP while explaining the backstory of songs like ‘Loud’ and his collaboration with Niall Horan on ‘Break My Heart.‘

When live shows were back up and running what were you looking forward to the most?

Being able to play with my band again. There is no feeling quite like getting to play to tonnes of people with your mates and just jumping about like an idiot on a stage. I never want to stop again now.

Is there any artist you have on your concert wish list?

Elton John! What a showman!

You’re currently on tour with The Vamps, how is it going so far?

It’s been phenomenal. I became mates with Brad over lockdown and we worked together in the studio a couple of times so when he invited me to come play with them it was a no-brainer. Their fans are absolutely insane! I don’t want it to end!

Could we expect a potential collaboration with The Vamps?

How does it feel to be back performing?

Better than I ever thought it could feel. I really struggled over lockdown with not playing live as I’ve spent my whole life playing shows in pubs, tiny venues etc and it really makes me feel alive. I just want to do as many shows as possible now.

Do you have any rituals on the road?

I have the best hype song before stage. It’s called ‘The Heart is a Muscle’ by Gang of Youths and I stick it on just before stage to get me fired up.

How was your lockdown experience? What got you through it?

It wasn’t easy but definitely could have been a lot worse. I had huge ups and huge downs and really had to figure out who I was again when I stripped back all the shows and the travelling. I was able to spend months with my family and girlfriend though and I’ve never been more grateful for anything ever. Those first few months were definitely the best of my life weirdly.

What have you been up to since things started opening up again?

It’s went from 0-100 so quickly! It’s been so hectic getting music finished and touring and doing promo again. I love it though!

What was your reaction to your VMA nomination, do you remember how you found out?

I still can’t believe that was actually real. Not being able to go was kinda heartbreaking but holy moly I never thought in a million years I would ever get nominated. I was just in the studio working when I started getting loads of tweets and I was very very confused. What a mad thing haha.

How was it working with Niall Horan on ‘Break My Heart’ that was followed by MTV naming you their first PUSH global artist of the year?

It was mad! We did the whole thing over email but obviously he is someone who I’ve looked up too for so long so it was a bit of a crazy thing.

What is the backstory of ‘Loud’?

Loud is the most personal song I’ve ever written. I had to take some time off this week to give my mind a rest. I was finding everything a bit much and my mental health was taking a bit of a battering. I went to Kent with my girlfriend and took some time out to reflect and gather myself. After that trip, I was sitting at a piano at my publishers house in North London and the song just fell out of me. It was everything I had been trying to say to my girlfriend as I know she was finding it hard as well. About how, in the midst of all the noise and the chaos, she was the only thing that really mattered.

What can we expect from your new single ‘Don’t Say You Love Me’?

It’s big, it’s bold, its fun. I may be heavily biased but I am obsessed with this song.

What is it about?

It’s about knowing you need to leave someone but getting fooled every time they say I love you even though you know they don’t.

What can you tell us about your forthcoming second EP?

It’s something I’ve been working away at over lockdown. I knew I wanted to bring out another body of work this year and I finally think I have the right combination of songs. I had so many songs that I wanted to include so cutting it down was tough but I’m so proud of this EP. I worked with some of my dream people on this and I can’t wait for the world to hear it!

What themes will you touch upon?

There’s heartbreak, self growth, self-realisation and finally some love. It really documents the journey of where my head was at the past few years and where I’ve arrived to.