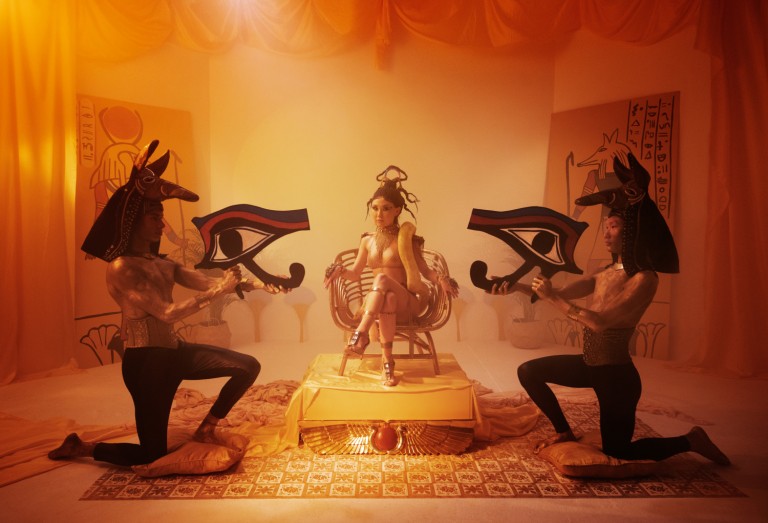 Rising popstar Bota Butterfly is rapidly becoming known for her ethereal pop sound, with a powerful visual presence to go with it and an undefinable, coveted star quality. We caught up with Bota to chat about her latest release ‘Drop‘ and her experiences in the music industry so far.

Hey Bota, you’ve just released your third single ‘Drop’ which boasts some mesmerising visuals with a distinct Ancient Egyptian inspiration as well as your ethereal, Pop sound. What inspired the visual themes of this track?

Firstly, the arrangement of the song has a bit of an eastern feel to it, and a mysterious vibe. The lyrics talk about a toxic relationship, and about the woman becoming empowered and taking control of the relationship. I felt that the Egyptian theme perfectly embodied the feel of the song, since ancient Egypt is surrounded in mystery. In addition, I thought that Cleopatra was the perfect embodiment of a confident and empowered woman.

What inspired the track itself? How did you work with the track’s producer Tylr Rydr to capture your vision for the song?

When I wrote the song, I had recently come out of quite a toxic relationship, so it all stemmed from that. Everything started from the intro melody which I played on piano, and Tylr added a vinyl effect to it and it made it very atmospheric. I wanted it to be quite dark as well, so all the instruments we chose had a dark and heavy sound. That then worked well in contrast with my lighter vocals to keep the ethereal feel.

As well as creating pop music, you’re also a classically trained pianist- how does this affect your songwriting process?

I always start with piano when I write songs, either playing through chord progressions or composing melodies. My background in classical music theory also influences the way I write the melodies. For instance, using a minor harmonic scale which I used in “Drop” is great for achieving an Eastern sound rather than the natural minor scale. Knowing how chord progressions work and the relationship between chords can totally change the mood of the song. Piano is also a very versatile instrument, you can play melodies and harmonies at the same time and experiment song ideas very easily, so my piano skills also give me the freedom to do that before I go into a session.

As an up and coming woman in the music industry, what challenges do you face and how do you overcome them?

I think when I was younger I was a bit more naive and didn’t know how the industry worked, and it’s full of people that will try to take advantage of that. The music industry is full of challenges, but if you love what you do and if you’re truly passionate about it, you’ll be able to overcome the challenges that we all face with hard work and not giving up.

What can we expect from you this coming year?

This year I’m planning to release three more singles. Each single will be supported by a strong visual theme like my three previous releases. I also plan to start gigging again after quite a long break from live music over the pandemic which I’m very excited about.