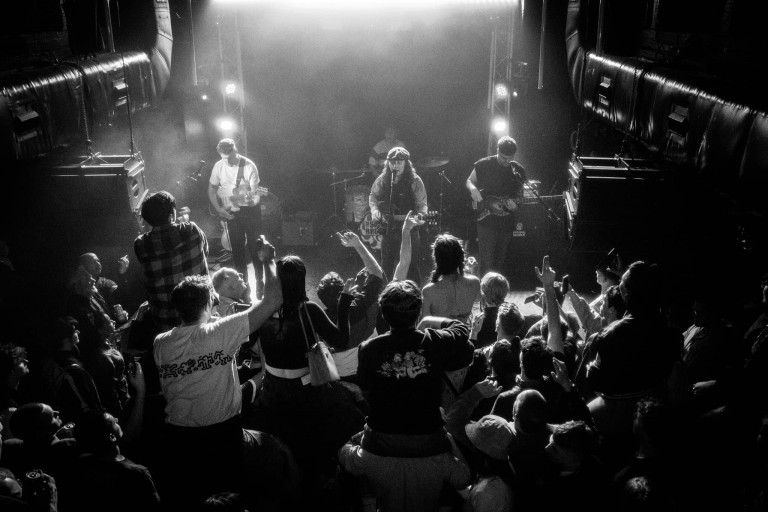 The Skinner Brothers Live at The Sugar Mill

Many iconic acts have walked the boards at Stoke-on-Trent’s Sugar Mill, and on a tepid Friday night in early March, it was The Skinner Brothers‘ turn to take centre stage.

As the support acts finished and more music-hungry punters filled the venue, a certain ‘anything could happen’ sense of optimism flooded the air. Everyone was up for a sharp, furious shot of Skinner Brothers anthems. Then the band came on—and it went off.

Front man, Zac Skinner, hyped up the crowd with a snarling punk sensibility and accomplished rock and roll swagger as the band rolled through an arsenal of high-energy tunes including the foot-stomping ‘Mountain High’, raucously anthemic, ‘Culture Non-Stop’, and delta-equesque foot stomper, ‘Put Me Down As a Maybe’.

With drummer Alfie Clayton and bassist Perry Meadowcroft keeping the blazing rhythms rolling, guitarist Joe Fish kept the pace with charismatic hooks and licks—leaving Zac Skinner to perform amongst the crush of the crowd.

Slowing the set down a little (and to give the crowd a bit of a breather), the band delivered the ever-infectious ‘Away Days’ as the crowd chanted along to the chorus in beer-drenched harmony.

The boys ended strong with a punchy version of ‘Chelsea boys’ as well as ‘Stupid Much?’ and ‘Low’ among other belting tracks.

Like most of the Sugarmill crowd, I can’t remember the particulars or exact set details with complete clarity—I was swept up in a wave of excitement from start to finish.

What I can say for sure is, The Skinner Brothers are an electrifying live act and their commitment to the cause shows with every anecdote they share and bar they play. A must-see act that is bringing the raw ceremonious passion of the rock and roll gig back to the masses—don’t miss out.

The verdict? Five stars: I fucking vibed on it, man.