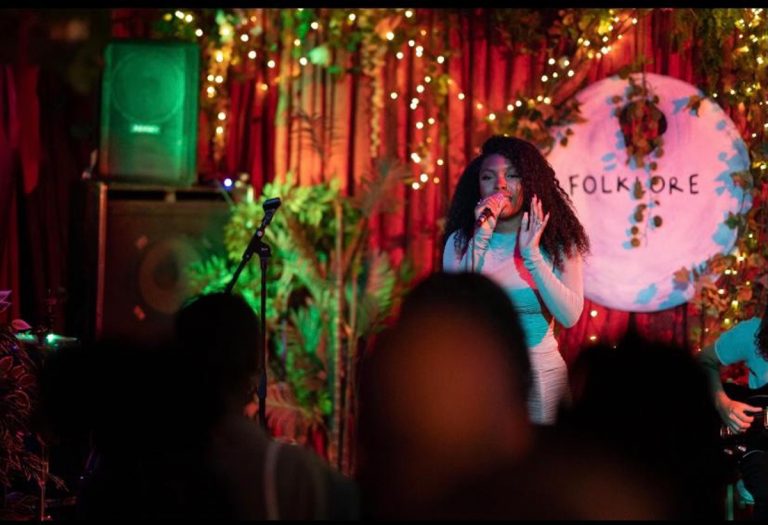 Live shows are finally back and The Neighbourhood Watch in collaboration with DSTNCT SPACE x Polarface Music treated us to an all-female led night of sonic bliss. Last month we headed up to Folklore in Shoreditch to catch the show, as we walked into the venue faintly lit by fairy lights, it felt quite surreal to be in a space like this after so long.

First up was West Midlands’ DEJA, who performed a selection of songs including ‘She’, ‘Paris’, ‘Boujee’ to name a few. DEJA’s air of sensuality was honestly a whole mood and set the tone for the entire night. Before each track began she broke down the meaning behind it to give the audience an insight into her personal life and even some of her rendezvous’.  Being so explicitly open about sexuality on tracks like ‘Paris’, makes DEJA even more relatable, as she sings and raps about a variety of topics that aren’t usually spoken about by other female artists. Simply put, DEJA makes anthems for women navigating various points of life, whether you’re glamming up for a girls night or you’re getting over an ex – there’s a song for every mood.

Up next was London artist BINA, an extremely talented artist reminiscent of legends Erykah Badu and Lauryn Hill, actually BINA even did her own rendition of Miss Badu’s ‘Other Side Of The Game’, which she harmonised so effortlessly to perfection. We also got to hear beautiful live performances of her upcoming single ‘DND’ and, EP ‘Humble Abode’, her tracks were deeply personal whether you’d previously heard them before or not, just showing how BINA’s lyrics can directly connect with her listeners. Halfway through her performance, BINA delighted us by showing off her talents as she pulled out her electric guitar to play along, which was a pleasant surprise. If you’d to check more of BINA’s music, her latest EP ‘This Is Not a Film’ is out now. ‘Dark Cloud’ is a bop!

And finally, it was as if an angel had graced the stage as Shamiya Battles performed her singles ‘What Does It Mean’, ‘Be Yourself’, ‘Mirror’ and ‘My Own’ which performed live sounded even better when graced the with her sweet, dreamy vocals. After releasing her EP ‘Be Myself’ almost a year ago, Shamiya’s talents have received support by everyone from BBC 1Xtra to No Signal and we can see why. It’s easy to see elements of Brandy and Nao in Shamiya Battles, with their voices sharing an ethereal quality. After performing all her tracks, the crowd went crazy for ‘My Own’ requested an encore which Shamiya kindly obliged. Some final words from Shamiya included an inspiring anecdote about pursuing your dreams and believing in yourself, which really resonated with us all.

Ultimately this night was a complete vibe and set the tone for live shows to come and for the next generation of women in R&B.